As the trial of former Egyptian President Mohammed Morsi continues, his defense team argues that much of the state's evidence is inadmissible. 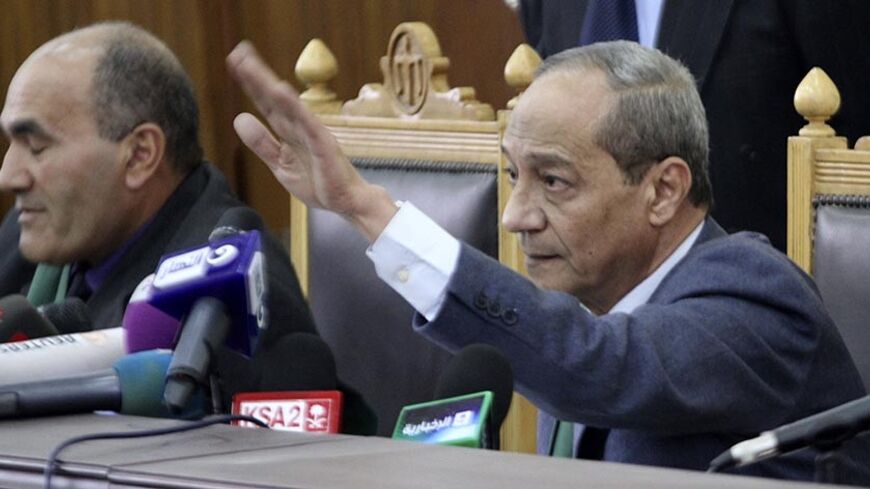 Judge Moustafa Mohammed Salama gestures while speaking during the trial of Muslim Brotherhood leaders in a courtroom, Cairo, Dec. 11, 2013. - REUTERS/Stringer

“Incitement to kill demonstrators” is the accusation that plagues former Egyptian presidents when demonstrations lead to their ouster. Former President Hosni Mubarak and some of his regime were charged with incitement, as are former President Mohammed Morsi and 14 others. The latter include prominent members of the Muslim Brotherhood such as Essam el-Erian, the vice chairman of the Freedom and Justice Party (the political arm of the Brotherhood); Mohamed Beltagy, the party’s secretary in Cairo; and Wagdi Ghoneim, the Brotherhood-affiliated Muslim preacher.

After a trial that lasted months, Mubarak was sentenced to life in prison, a verdict his defense team and supporters characterized as politically motivated and meant to appease an angry public. But the sentence was appealed, and the Court of Cassation decided to permit a retrial, which is currently underway.

The same fate might await Morsi and his cohorts in the case of incitement to kill the protesters demonstrating in front of Itihadiya presidential palace. Al-Monitor attempted to examine the most important evidence presented by the plaintiffs and the responses put forward by the defense.

Ali Suleiman, the attorney for the family of Al-Husseini Abu Deif, who was killed at the palace, told Al-Monitor that the case file contained a lot of material evidence. This evidence includes a CD of surveillance camera footage from inside the palace’s security center, where protesters were tortured. According to Suleiman, Assaad al-Sheikha, then the deputy chief of the cabinet, can be seen in the footage.

Suleiman added that the case of incitement is convincingly established against Beltagy, Erian, Ghoneim and Gamal Saber (the coordinator of the Hazimoun Movement), in addition to a number of Brotherhood leaders who called on their supporters — via telephone interviews with satellite TV channels and press statements — to gather in front of Itihadiya palace and protect the president.

He explained that murder and violence were a natural result of their call to rally in front of the palace while opponents of the deposed president were protesting there. As such, in his opinion, “They must be tried for incitement.”

On the other hand, a defense source denied the presence of material evidence against those accused of incitement to murder. Speaking to Al-Monitor, he clarified that the prosecution did not charge the original perpetrators, for the “original perpetrators in such cases are the ones capable of identifying the instigators, as a result of which, a determination can be made as to whether incitement took place,” as he said.

The source, who requested anonymity for fear of what he called “harassment by security forces of attorneys defending objectors to the coup,” added that the head of Heliopolis Prosecution, Judge Ibrahim Saleh, dismissed the charges against the leaders of the Muslim Brotherhood and the Freedom and Justice Party who were accused of incitement to kill protesters in front of Itihadiya palace in 2012. The source added, “The Heliopolis prosecution’s memorandum was removed from the case file currently being deliberated by the courts, whereby pages 3,900 through 4,000 were removed.”

He continued, “The prosecution did not submit any video, audio or written material proving that any of the defendants incited murder. The case contains no pertinent documents except for the memorandum submitted by Homeland Security, which is viewed as an opponent of Morsi and his regime.” He opined that the video clips and press statements mentioned by Suleiman were not sufficient to prove incitement, and were merely calls for their supporters to rally.

Legal expert Mahmoud Kbeish refused to comment on the case because it was in the hands of the judiciary, and, as such, no one has the right to influence the proceedings by giving an opinion. Yet, he told Al-Monitor, “The act of incitement entails creating an idea to commit a crime and encouraging the original perpetrator to commit it. If a crime did occur as a result, the idea’s originator (the instigator) is tried in the same capacity as the perpetrator. But, by definition, in order for incitement to be present, the idea for the exact crime must be instilled, and not an idea that led to another idea leading to the crime. In other words, creating hatred in a person who committed a murder cannot be considered incitement, even if the idea to hate led to an idea to commit murder by the perpetrator.”

When asked about witness testimony, Suleiman replied that the case involved 80 prosecution witnesses.

“One of the most important testimonies,” Suleiman noted, “is that of the Republican Guard commander who said that Morsi ordered him to disperse the protest, but that he refused because doing so was not within the purview of his responsibilities, which only entailed securing the palace. The commander added that he requested that Morsi ask the Interior Ministry to break up the protest, to which Morsi replied, ‘The Interior Ministry will not comply.’ The next day, after a closed-door meeting with Brotherhood leaders at his residence, Morsi told the commander: ‘We will act.’”

Al-Monitor’s source inside Morsi’s defense team commented on the witness testimony by saying, “Accepting witness testimony without material evidence is for the judge to decide. But the testimony of witnesses from Homeland Security, the Interior Ministry and the army’s Republican Guard is tainted because they all are opponents of Morsi’s regime. The judiciary deliberating the case is also viewed as an adversary to Morsi following the latter’s law on judicial authority and his constitutional declaration issued in 2012, which degraded the powers of judges for the benefit of the people.”

In contrast, Kbeish affirmed that just one piece of hard evidence would be sufficient for the court to convict the accused, and witness testimony was but part of such evidentiary data.

The defense still objects to Morsi being tried in regular court. In this regard, Al-Monitor’s defense source said that Morsi’s trial must be governed by special procedures, as stipulated in the suspended constitution of 2012 and pursuant to the new constitutional draft, which will be subjected to a referendum.

He continued, “Morsi’s trial requires a notice from one-third of the members of parliament and the approval of two-thirds thereof. It also necessitates the formation of a tribunal comprised of the chairman of the Constitutional Court, senior members of the Court of Cassation and the attorney general."

However, Kbeish asserted that since last July, Egypt was ruled by the constitutional declaration, which did not require special procedures for trying the president. He added that employing extraordinary procedures to try Morsi required that he be a sitting president at the time of the trial.

“But initiating proceedings against him after leaving office subjects him to the same trial procedures as any other citizen,” Kbeish added.

The evidence is relative, and the court is comfortable with the testimony of witnesses. The case is predicated on calls to rally being construed as implicit incitement to murder. Still, the verdict will not be to the liking of all, particularly after the defense characterized the judiciary as an opponent of Morsi’s regime. As a result, if the defendants are found guilty, the judiciary will be accused of bias against the Brotherhood. But if all or some of them are acquitted, then the Brotherhood’s detractors will accuse the court of secretly backing the accused and their regime, as was the case with the judges who acquitted Mubarak on some of the charges against him.