The crisis between President Mohammed Morsi and Egypt’s judiciary has intensified after Eastern Cairo Attorney General Mustafa Khater publicly embarrassed the president by releasing all 137 suspects detained after the recent clashes between his opponents and supporters. 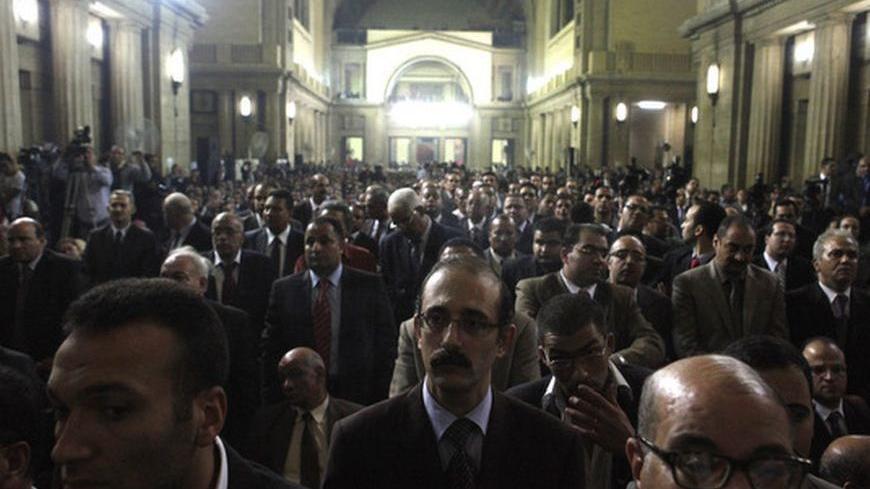 CAIRO — President Mohammed Morsi issued a decree on Wednesday, Dec. 12 declaring that Egypt’s controversial constitutional referendum will be held in two phases. The first will cover 10 governorates, including the capital of Cairo, on Saturday Dec. 15, while the second will cover the remaining 17 governorates on Dec. 22.

The decision comes after weeks of failed attempts by the presidency and Egypt’s Supreme Judicial Council to sway thousands of judges not to boycott the referendum. The vote was rushed in response to a political crisis instigated by President Morsi’s Nov. 22 decree that granted him sweeping powers and immunity from judicial bodies.

Judge Zaghloul Al-Balshi, Deputy Justice Minister and secretary-general of the committee overseeing the referendum, reported to local press that the "number of judges who agreed to participate had reached 7,276" — around 4,000 fewer judges than the number required to hold the referendum in one phase.

The crisis between Morsi and Egypt’s judiciary intensified after Eastern Cairo Attorney General Mustafa Khater publicly embarrassed the president by releasing all 137 suspects detained after the violent clashes on Wednesday, Dec. 5. A few hours before the release order, Morsi said in a public speech that some of the suspects have “admitted receiving money to instigate violence, and there was evidence to be announced by the prosecutors.”

All of the suspects were originally held and tortured for more than 12 hours by members of the Muslim Brotherhood and other Islamist parties who demonstrated on Wednesday, Dec. 5, in support of Morsi’s decision that ignited the political crisis and caused severe damage to Egypt’s ailing stock market and economy.

Speaking on condition of anonymity, a Ministry of Justice source confirmed to Al-Monitor that newly appointed Prosecutor General Talaat Abdallah “pressured the Eastern Cairo attorney general to extend the detention of suspects so as to not embarrass the president.”

“Abdallah wanted to return the favor to his Muslim Brotherhood president, who just appointed him to one of Egypt’s most powerful positions,” said the source that refused to have his name or position published.

“Mustafa Khater told the prosecutor general to sign the detention warrants himself and take responsibility for it. He made it clear that all suspects were tortured, there was no evidence connecting them with the charges they were facing and that he will not change his decision to release them even if the president is publicly embarrassed.”

Among those released was former diplomat Yehia Negm, a member of Egypt’s diplomatic mission to Venezuela until 2005. With several bruises on his face and two black eyes, Negm publicly testified to hours of torture at the hands of Morsi’s supporters in a conference held at the Cairo Press Syndicate on Wednesday night.

A few hours after the release of all 137 detainees, newly appointed Prosecutor General Talaat Abdallah ordered the transfer of Mustafa Khater, to Beni Suef in Upper Egypt on Wednesday.

Members of Eastern Cairo’s prosecution immediately announced a general strike in reaction to the transfer order and called for an emergency meeting to address what they described as the “executive authority’s interference in the works of judiciary.”

Khater sent a memorandum on Wednesday to the Supreme Judicial Council demanding his return to his original position as a judge and refused his transfer to Beni Suef.

Similarly to Morsi’s decree being annulled after sparking massive protests and leaving several dead and hundreds injured in clashes in front of the presidential palace, the Prosecutor General Talaat Abdallah reversed his decision on Thursday and signed another order keeping Khater in his post.

In spite of the decision to split the nationwide referendum into two phases, the ongoing judicial crisis cast serious doubts on how efficient the voting process will be.

Khaled Abu Bakr, a member of the International Union of Lawyers and the representative of several families of victims during the trial of deposed president Hosni Mubarak, told Al-Monitor that “history will be a witness to Morsi and the Muslim Brotherhood’s insistence to hold a referendum while thousands of judges continue to boycott and refuse to have any sort of relation with such a process.

“Both Morsi and the Muslim Brotherhood are one entity who is concerned over the president’s legitimacy that was put at stake by his own decisions,” said Abu Bakr. “Not to mention the chain of retaliations against their judicial and political rivals that would only be accomplished by passing this constitution as soon as possible.”

Abu Bakr says the incompetence of Morsi’s administration was clearly reflected by the “decrees signed and reversed within a few days and sometimes a few hours.

“What we witnessed from the prosecutor general was never witnessed in the history of the world.

“I call on Egyptians to support the judiciary against the unprecedented, blunt and continuing violations from President Morsi and his appointed officials,” said Abu Bakr.