In an exclusive interview with Al-Monitor, former Syrian Foreign Ministry spokesman Jihad Makdissi says that a rapprochement between Iran and Saudi Arabia will eventually be required to end the fighting in Syria. 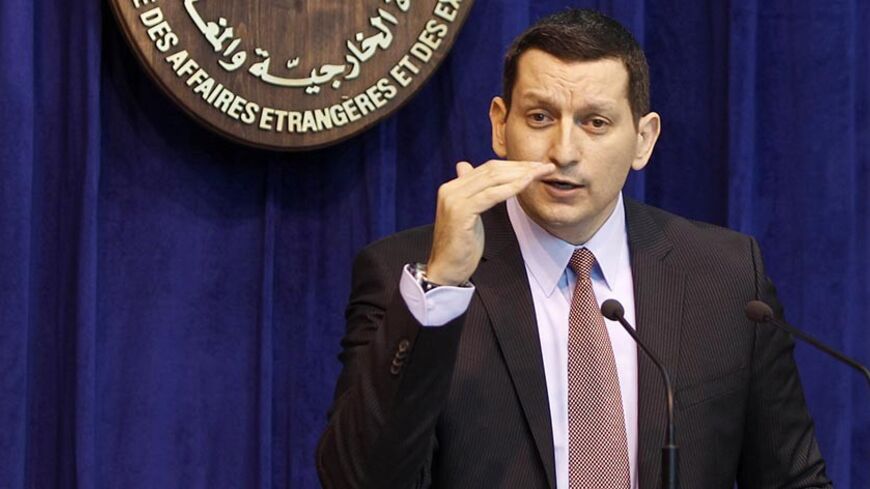 World powers should focus on a long-term political solution to the Syrian crisis when they meet in Montreaux, Switzerland on Jan. 22, Syria’s former Foreign Ministry spokesman Jihad Makdissi told Al-Monitor in an exclusive telephone interview.

Syrians need to “stay optimistic” about the peace talks, as Geneva “is the only platform we have as Syrians today,” he said.

Makdissi — who resigned from his post in December 2012 — acknowledged that it would be a long process, but a necessary one after both sides failed to “wipe each other out.”

Progress can be made at Geneva II despite Iran’s absence, Makdissi said, but Tehran — as the Syrian regime’s main ally — is ultimately needed to implement any agreement on the ground.

While Makdissi supports what he called "confidence-building measures" such as prisoner releases, counterterrorism cooperation and humanitarian corridors, he said that the Geneva II meetings should stay focused on a political solution.

Makdissi said that the process requires "creating a transitional body where both sides are represented with executive power to start the restructuring of the country."

"If Geneva fails or is stalemated, it is obvious that President [Bashar al-]Assad will seek either re-election or extension of his mandate with the blessing of the current parliament," said Makdissi.

"And since the opposition, as far as I can observe, doesn’t have a candidate or a Plan B, they will see this as defiance and I am afraid we will fall again into another vicious cycle of armed confrontation. This is why I totally support the Geneva process."

Al-Monitor: What are your expectations for Geneva II?

Makdissi: I expect it will be a very hard mission for both sides because diplomacy and dialogue were absent for almost three years and the colossal death toll marginalized all moderates. Both sides were trying to wipe each other out and failed. I expect that this is the beginning of a process and not a quick solution, but we all need to stay optimistic in the long run.

Al-Monitor: There appears to be a shift in international concern toward humanitarianism and counterterrorism. How prominent should these discussions be at the table?

Makdissi: Any understanding in any area, be it humanitarian aid, fighting jihadists, releasing or exchanging detainees and so forth, will only be a confidence-building measure that will not hold for long if they don't agree on the essence of a political solution. So yes, it is important to tackle humanitarian aspects and other measures, but defining the political solution is the most important item that should be on the agenda.

Al-Monitor:  Do you believe the Syrian regime will take these talks seriously?

Makdissi: Seriousness can be imposed if both sides stick to the text of Geneva that the US and Russia reached as a compromise.

It is in the interest of the Syrian government to act in a responsible manner after three years of continued misery.

The best way to test the seriousness is to push everyone to the table of Geneva because during the past three years both sides tried all tactics except serious diplomacy. I am sure the Syrian street is able to judge its politicians and that might be a game changer if they acted in an irresponsible manner toward this window of opportunity.

Al-Monitor: Is the decision on resolving the Syrian conflict ultimately in the hands of foreign powers, such as Iran, Saudi Arabia, Turkey and Qatar? Can progress be made without Iran at the table?

Makdissi: I agree to a certain extent that it is out of [Syrian] control, especially in the northern part of Syria because of jihadists and the loose borders with Turkey, but it is never too late to start damage control and containment to prevent further spill over. The Geneva process will be a suitable window of opportunity to restore stability. Eventually, we will need to see some sort of immediate rapprochement between Saudi Arabia and Iran to help stop the deterioration in Syria.

Progress can be made without Iran, but to implement that progress on the ground you need to have the Iranians on board, especially with their obvious strong leverage on the Syrian government and their direct engagement — among others — in the Syrian crisis. I think that if Iran accepts the terms of the Geneva I communique in a direct statement, it might open the way for its participation in Geneva II. I think its participation is beneficial from a diplomatic point of view.

Al-Monitor: The internal opposition has so far been left out of Geneva II. Additionally, certain members of the National Coalition have also pulled out. How can a peace process take place with so many absent from the opposition delegation?

Makdissi: We have to realize that the Syrian National Coalition is having a serious problem in selling the diplomatic or political solution to the majority of its supporters, because it had lofty goals from the beginning and lacked realism. At the end of the day, it will go to Geneva because its regional supporters decided that the Geneva platform is the only valid one today. The statements that we heard in the last few days were meant to help it face its supporters with the decision to go to Geneva.

Al-Monitor: Is Geneva the right approach to resolving the Syrian conflict? How can we envision a political transition, and should we be working toward elections in 2014?

Makdissi: Geneva is not perfect, but it is the only platform that we have as Syrians today. It is not a solution and no one has any illusion that the Syrian crisis will be solved on Jan. 22, but at least it will create a process of change. In order to have a meaningful process to peace, they need to agree on establishing the transitional joint body with full executive powers. Of course, having all regional players on board is essential to sideline and weaken all troublemakers.

The political transition, according to Geneva II, should be done through creating a transitional body where both sides are represented with executive power to start restructuring of the country.

If Geneva fails or is stalemated, it is obvious that President [Bashar al-]Assad will seek either re-election or extension of his mandate with the blessing of the current parliament.  And since the opposition, as far as I can observe, doesn’t have a candidate or a Plan B, they will see this as defiance and I am afraid we will fall again into another vicious cycle of armed confrontation. This is why I totally support the Geneva process.

As for a cease-fire, it can only be achieved in a gradual manner. In light of the chaotic situation on the ground, I am afraid it will continue to be fragile.