Where Does Erdogan Stand on Syria?

After meeting with US President Barack Obama, Turkish Prime Minister Recep Tayyip Erdogan says his views on the Geneva process have changed and evolved. 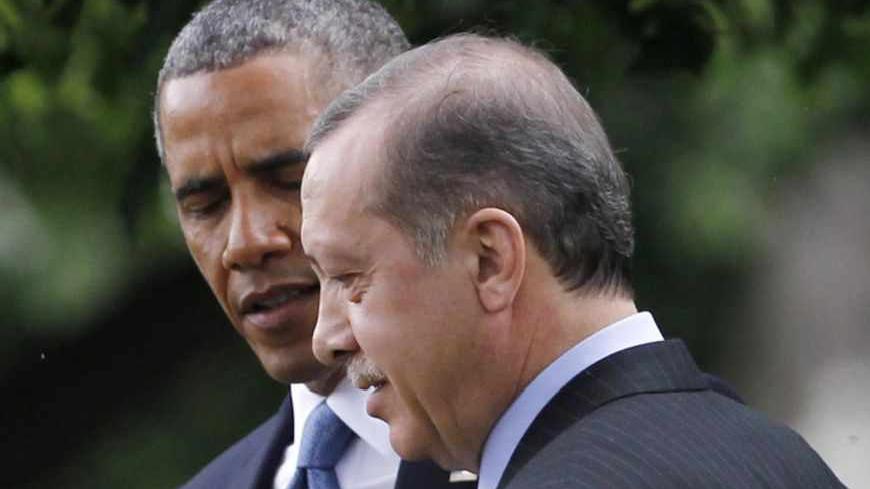 Turkey's already clogged and failed Syria policy is inevitably changing. Practical implications of the change will be visible to the naked eye in the coming days.

To narrate how this is not only a topic to be analyzed, it is best to share this anecdote:

Prime Minister Recep Tayyip Erdogan, in a news conference on May 14 at Ankara Esenboga Airport, before his departure to Washington to meet US President Barack Obama, was asked by a journalist: “In your meeting with Obama, will you want a more aggressive policy against the Syrian regime?”

Erdogan replied, "We will discuss what kind of more active steps we can take. Measures decided at the Geneva I conference did not yield results. Initiatives such as Geneva II appear to us be trying to spread flour on a string [a Turkish idiom that means "hopelessly futile"] and make it stay there."

After saying that, Erdogan went to the United States. On May 16, a whole day of bilateral meetings and meetings between delegations was held in the White House.

After his lecture at the Brookings Institute in Washington on May 17, Erdogan was asked: “You described the Geneva process as trying to spread flour on a string. How you are looking at that process now?"

This was the prime minister’s response: “True, I did say that the Geneva process was like trying to spread flour on a string. You can say that my view has changed and evolved. There is an opinion to advance the Geneva process a bit further to enable Russia and China to contribute to the process. As Turkey, we can support such an approach. But prolongation of this process should not be to gain time for [Syrian President Bashar al-]Assad.”

To decipher the direction of the "change and evolution” in Erdogan’s views, you have to recall what Obama said in their joint news conference at the White House on May 16.

Obama said the Geneva II process would bring together the regime and the opposition, and Turkey would play an important role in this phase. He said he agrees with Erdogan that Assad must go and hand over the government to a transitional government, and that this was the only way out of the crisis.

In the subsequent question-and-answer exchanges, Obama said, "What we have to do is apply steady international pressure, strengthen the opposition. I do think that the prospect of talks in Geneva involving the Russians and representatives about a serious political transition that all the parties can buy into may yield results.”

Erdogan, who spoke after Obama, said, "We have views that overlap, as the president has just said. But let me tell you that ending this bloody process in Syria and meeting the legitimate demands of the people by establishing a new government are two areas where we are in full agreement with the United States."

We understood especially from the last sentence that there was a convergence of views between two leaders who both want Assad to go, but who have been pursuing different policies on how to achieve that.

Fine, but when this agreement was evolving, whose views moved closer to the other side’s?

We knew that Turkey, unlike the United States, was pursuing a policy that called for a "military solution" to the Syrian crisis and to this end it had opened its border to al-Qaeda groups like Jabhat al-Nusra and was insisting on Assad’s departure as a precondition to initiating any diplomatic process.

Was it Obama’s views that moved closer to Erdogan’s? No, it was the other way around. Convergence of views was secured when Erdogan changed his views on the crisis. Erdogan opted to a requisite change of paradigm and had to commit himself finally to a diplomatic-political solution perspective. This we see from his remarks on the Geneva II process which he had earlier defined as "spreading flour on a string."

“Our views do overlap," Erdogan said, "and with our discussions this evening, we will continue to explore what we can do together, what we can consider as parts of a road map looking at Geneva and beyond. Russia and China being part of this process is very important, and this is important in the context of the permanent members of the UN Security Council. Their participation in this process will certainly add greater impetus."

And finally, how will the positive change Erdogan subscribed to after the White House meeting by moving closer to the world mainstream thinking will reflect on the field?

We think this is the question that must be addressed from now on in regard to the near term. It is time to make assessments under the following broad subtitles:

The Geneva II process is an initiative prompted by recognition of the impossibility of a military solution in Syria. Therefore, should Geneva II fail, a third will follow. The valid rational for military assistance to the opposition from this point on would be to systemically illustrate to the regime that it has no other option but a diplomatic-political solution.

As a subtext, the Turkish prime minister must have understood that the international community does not want Syria to become a country where jihadists and al-Qaeda have a free hand.

If a military solution is ruled out as an option, Turkey no longer has a reason to allow al-Qaeda-affiliated Jabhat al-Nusra and other international jihadists to use Turkey’s border regions as a rear base for their war in Syria. Erdogan said at the White House that his government does not want Syrian territory to be used by terror organizations but did expand on what he meant by "terror organizations."

If he meant the Democratic Union Party (PYD), the Syrian extension of the Kurdistan Workers Party (PKK), that has no bearing on the situation.

On the other hand, until yesterday we had no clue if Ankara considered Jabhat al-Nusra as a terror organization.

Nevertheless, it is useful to take note of what he said in Washington on May 18 when answering the questions of Turkish journalists covering his US visit: "The Syrian opposition is struggling for national sovereignty. We are giving logistical support as much as we can. We will continue to do so. It will be a victory of democracy. But we can’t allow extremists." Can we deduce from his last sentence that Erdogan will no longer allow al-Nusra and international jihadists to operate in Turkey? Perhaps, yes.

We have to watch.

Turkey’s position of a “solution without Assad” — that could be summarized as ”Assad’s departure as the precondition of any diplomacy and search for a political solution" — was not realistic to start with. After Erdogan’s statements at the White House, it became totally irrelevant.

From now on Ankara will support a diplomatic-political solution and transition process that will be with Assad at the outset but end without Assad. This is what the Geneva process foresees.

Officials in Ankara could partially repair the damage they have caused in Turkey and in the region with their extreme and ideological Syrian policies by first changing their paradigm and then playing the role of a positive, constructive and peaceful actor in the solution and transition process. Unfortunately, with the policy it followed, Turkey has made itself an aggressive party that foments instability. It distanced itself from all the minorities of Syria and made them foes. The most important positive role Ankara can play under the circumstances is to persuade the Sunni Islamist opposition it is believed to influence to become a part of the diplomatic-political solution.

The Geneva process should be an opportunity for Turkey to put an end to losses it sustained.

Kadri Gürsel is a contributing writer for Al-Monitor's Turkey Pulse and has written a column for the Turkish daily Milliyet since 2007. He focuses primarily on Turkish foreign policy, international affairs and Turkey’s Kurdish question, as well as Turkey’s evolving political Islam

by Murielle KASPRZAK and Joseph SCHMID | AFP | May 26, 2022
END_OF_DOCUMENT_TOKEN_TO_BE_REPLACED