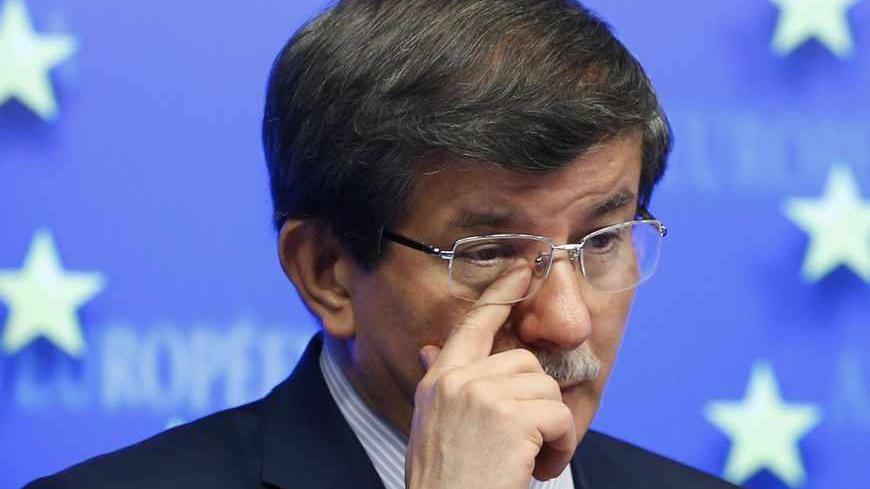 Turkey's Foreign Minister Ahmet Davutoglu wipes his eye as he addresses a news conference during an European Union-Turkey association council in Brussels, May 27, 2013. - REUTERS/Francois Lenoir

Turkish Foreign Minister Ahmet Davutoglu spoke for three hours on May 24 to 20 journalists he had invited to a hotel to discuss his Syria policy. He also answered questions about it.

There are two main reasons to examine the minister’s comments, as much as they were reported in newspapers.

The first is that this was the first time he had made such a comprehensive review of the concrete and positive changes of May 16 in the clogged, failed Syria policy that was increasingly becoming a source of instability.

The concrete result of the discussions between Prime Minister Recep Tayyip Erdogan and President Barack Obama on May 16 at the White House was a change in Turkey’s strident Syria policy.

It may sound simplistic, but Turkey’s Syria policy now must be examined as a contrast between pre-May 16 and post-May 16.

The second important aspect of Davutoglu’s meeting with the media was the way it offered important clues to the minister’s mindset and how it deals with realities.

Although it is the AKP government and its leader, Erdogan, who are officially responsible for the good and the bad of Turkey’s Syria policy, the owner of the intellectual property behind the policy is Davutoglu. This burdens Davutoglu with massive responsibility, before history and conscience.

Let’s start with the most striking, or, as the media would say, “most sensational” comments of the minister.

Davutoglu said, “Bashar Assad’s problem is that his mother is alive,” and added: “His mother, who is now in Dubai, constantly preaches to him about his father and how he had handled Hama. She is like a ghost who says, ‘If I were you, I would done it like at Hama and crushed it.’ He [Bashar Assad] talks reasonably with us and then changes his mind after the regular weekly family meeting. The first circle of the regime is the Assad and Mahluf families [from the maternal side]. The second circle is the Nusayri ring made of commanders of intelligence, the army and the air force. The third is the Baath party. We always advised him to cooperate with the outmost circle and offset the internal ones. But he couldn’t do it.”

Here is a “nasty mother figure’ who keeps reminding her docile child, who in her eyes has never grown up, to emulate his father as a role model and counsels “do as he did." The docile kid Bashar obeys his devilish mother and kills people.

Ignoring the systemic and institutional backgrounds that are the true causes of the brutal methods the Baath regime uses against the people, and then personalizing violence with the “mother factor," tells us a lot.

Davutoglu’s words remind us of how much was invested in personal relations between the ruling families of the two countries as part of Turkey’s ambition to transform and integrate Syria during the honeymoon period when Turkey’s “zero problems with neighbors” policy could still be applied to Syria.

We then remember how, when it was found out that these affectionate and friendly relations had no effect in making the Baath regime heed Ankara’s guidance after the uprising broke out in March 2011, they rapidly turned to enmity. This psychosis of betrayal caused the personalization of Turkey’s Syria policy.

As far as we can see, there is not much change in this problematic mindset. No appropriate lessons have been drawn from problematic assumptions that turned out to be wrong.

The Turkish foreign minister finally accepted that he made some mistakes in Syria policy. This is what he said: “Of course, there were times when our expectations did not materialize. To be blunt, I didn’t think that Assad could be so brutal. I always thought we could stop him, as a person we knew personally. Nobody could have thought that he would massacre so many with chemical weapons to Scuds."

Sadly, to personally know the leader of a regime and to have confidence in acquaintance is not enough to avoid mistakes. To the contrary, it can lead to even bigger mistakes.

Such as? Such as a Syrian policy built on lack of foresight.

Davutoglu said, “We couldn’t know that Assad would go beyond the person we knew and become so brutal."

The real meaning of what Davutoglu termed as “brutality” is the “political resistance against rebellion and the military capacity it can use in this context.” From his remarks we understand that he overlooked all these elements when crafting policy and found it enough to think that he knew Assad personally.

Davutoglu also said, “We didn’t expect all the countries that quickly declared Assad to be illegitimate to become simple onlookers to the crisis." He must have been referring primarily to the United States, Great Britain and France.

Was it impossible to predict that an Obama administration determined to end post-9/11 US wars would firmly resist a new invasion or a limited intervention in Syria unless there was a direct threat to US security?

Turkey, simply by mistakenly assuming that the Western alliance would intervene directly and actively in the crisis, went too far in Syria and found itself all alone on the front lines. In the meantime, it suffered much damage that could not be remedied in the short term.

A change in Turkey’s Syria policy had become imperative because the cost of the current policy was climbing and the desired results were out of reach.

Davutoglu terms the positive change finally achieved in Turkey’s Syria policy on May 16 as ‘’securing synchronization." According to the minister, the US and Turkey have synchronized their Syria policies.

In reality, what was secured was Turkey synchronizing its Syria policy with that of the US. This synchronization is Turkey’s committing itself to Geneva II and consequently giving up its insistence on a military solution and “Assad must go” as the first and priority precondition of a diplomatic-political solution process.

Now we read that the foreign minister told journalists that ‘’from the outset, from March 2011, for 10 months we tried to persuade Assad to arrive at a political solution."

Our observation, however, is that after the tenth month, Turkey blew up all its bridges to the Syrian regime and did everything short of declaring war and sending its national army into Syria to bring down Assad.

One reality: Turkey’s capacity to pursue a military solution was always totally insufficient. Now, because of wrong policies, its capacity to contribute to diplomatic and political solution has been seriously impaired; however, the potential is there and it could still contribute positively.

Finally, a most-important indicator of the change in Turkey’s Syrian policy, or its synchronization as the minister put it, was his remark, “We see al-Nusra Front just as we see al-Qaeda."

Davutoglu is not openly calling Jabhat al-Nusra “terrorist” but appears to be saying it.

We must be ready for the practical implications of this approach.