Israel should reach out to separatist Syrian Kurds

Israel should consider the Kurdish achievement of establishing an autonomous region in Syria and reach out to those groups which fight extremist Islamic powers in the country. 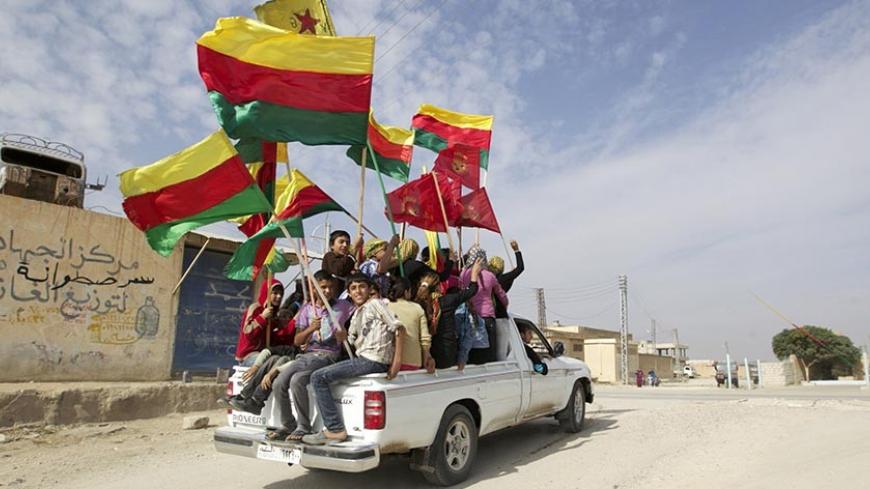 Syrian Kurds sit in the back of a truck as they celebrate what they said was the liberation of villages from Islamist rebels near Ras al-Ain in Syria, Nov. 6, 2013. - REUTERS/Stringer 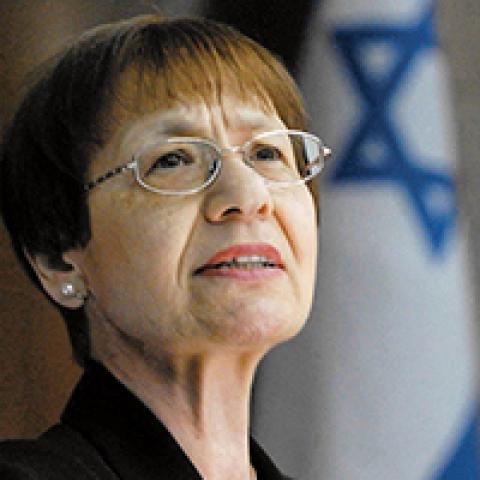 At the end of 2013, the Kurds of Syria made a few unprecedented moves: They declared the establishment of a Kurdish autonomous region in Syria, published a draft of a Kurdish constitution, called for elections to a Kurdish parliament in four months and decided to join the upcoming Geneva conference on Syria as a unified delegation separate from both the government and the opposition. These bold moves indicate that while the Syrian regime and the myriad of opposition groups are busy destroying the Syrian state and each other, the Kurds of Syria are working assiduously to develop their own nation-building and state-building project. The main political group which appears to be leading the project is the PYD headed by Salih Muslim and co-chairwoman Asia Abdullah. In fact, the main power behind it is the PKK, based in Turkey and in Iraqi Kurdistan.

In many ways, the Kurds of Syria are walking in the footsteps of their brethren in Iraqi Kurdistan who had initiated their project in 1991 when they established the Kurdistan Regional Government (KRG). Like the KRG, the Kurdish entity in Syria has all the trappings of a semi independent region. It has a flag, army, police, and administration of its own. It, too, has declared autonomy against all odds. Not only did the Syrian opposition with which the Kurds were allied for some time come out strongly against it, but many other states in the region — particularly Turkey, Iran and Iraq — followed suit because of the fear of spillover effects on their own Kurdish population. (The Kurds of Iran, for example, started demanding a federal system in Iran). However, in not heeding threats from either the Syrian opposition or those states, the Kurds proved their assertiveness in drafting a constitution which aims at turning these achievements into a fait accompli.

A quick look at this constitution will show how far they went.

First of all, the terminology reflects the new worldview which informs the Kurdish discourse. The constitution refers to the region as Kurdistan Rojava, namely Western Kurdistan. This means that the Kurds' term of reference is no longer Syria but Greater Kurdistan, which forms part of four countries: northern Kurdistan (Turkey), southern Kurdistan (Iraq), eastern Kurdistan (Iran) and western Kurdistan (Syria). While insisting on the Kurds’ right for self-determination, the constitution espouses federalism with the central government in Syria. The constitution stipulates that the region (iqlim) will be headed by a president to be elected directly by the people. Similarly, the region will have a parliament and government of its own, separate from the central government, as well as a national anthem and a national holiday, Nowruz. After years of linguicide, the Kurdish language will be — together with Arabic — the official language of the region. The constitution stipulates that Rojava Kurdistan will have a military force of its own whose task will be to protect the “region’s borders.”

Furthermore, no other force will be allowed to act in the region. Another very unique point is that the constitution does not state that Islam is a source of legislation as is the case with the constitution of all the Arab countries. In fact, it does not mention Islam at all. In this it also differs from the constitution of the KRG, which does have references to Islam.

The more liberal, secular stance of the region is evidenced by the fact that a short while ago civil marriages were sanctioned by the Kurdish authorities. Similarly, women are taking part in social and political activities side by side with men, including in military actions. In this they differ from the KRG and in fact in some respects the achievements of the Kurds in Syria are even more impressive than their role model, the KRG. For one thing, the Kurds in Syria have started from scratch and since July 2012 they have managed to put themselves on the regional and international map. And while the Kurds of Iraq had at the time the support of various NGOs and some outside countries whose support for state-building was crucial, the Kurds of Syria have not benefited from such aid. Similarly, while the Kurds of Iraq did not have to struggle against the Iraqi opposition, the Kurds of Syria have been leading a life-and-death fight against various Islamist groupings which had filled the vacuum left by the Syrian state in northern Syria. Some of these Islamist forces were being backed by Turkey, which is trying to frustrate the Kurdish project by a proxy war. Another important geostrategic difference is that while the Kurds of Iraq benefited from the natural high mountains where they could retreat in times of danger, the Kurdish region in Syria does not have this advantage.

Furthermore, their region does not form a cohesive unit but has three major centers separated from each other. Against the background of such formidable obstacles, the success of the Kurds in Syria to carve out for themselves an autonomous region is not a small feat.

Notwithstanding these achievements, many challenges still lie ahead. The Kurdish entity in Syria is not recognized by the international community; however, unlike the PKK, the PYD is not on the international terrorist lists. Another challenge is the internal conflicts between the PYD, which is backed by the PKK, and 15 other Kurdish groupings, which are backed by the KRG. This rivalry is a reflection of a deeper one between the KRG and the PKK so that the Kurds in Syria have to contend with two "big brothers" instead of one. Still, such rivalry is mitigated by the fact that all parties have managed to develop certain modus operandi as exemplified in the decision on a unified policy in the upcoming Geneva conference.

The key question regarding the Kurds’ participation in the Geneva conference as a separate delegation and their standing in Syria as a whole depends on the American approach. So far the United States seems intent on marginalizing the most pro-Western, secular and democratic force in Syria. Ironically enough, while European countries and even Turkey have shown flexibility by inviting Salih Muslim for discussing the Kurdish situation in Syria, the US has so far not granted him a visa for entry into the United States [which was reported by Al-Monitor's Amberin Zaman].

And what about Israel? Should it follow the American line by ignoring the Kurds or should it take a bolder, independent one? For a long time the Kurds of Syria were a silent entity as far as Israel was concerned. Until a few years ago not much was heard about the Kurds of Syria and they were not considered as a power to be reckoned with. However, the upheavals in Syria put their strategic importance into relief as they are the main bulwark against the most extremist among the Islamists in Syria, namely Jabhat al-Nusra and the Islamic State of Iraq and al-Sham. Accordingly, Israel's guiding rule should now be “my enemy’s enemy is my friend.”

Indeed, in this changing geostrategic map, the two parties are sending feelers for possible ties. But will they bear fruit?