Married Iranian women must still obtain permission from their husbands to travel internationally. 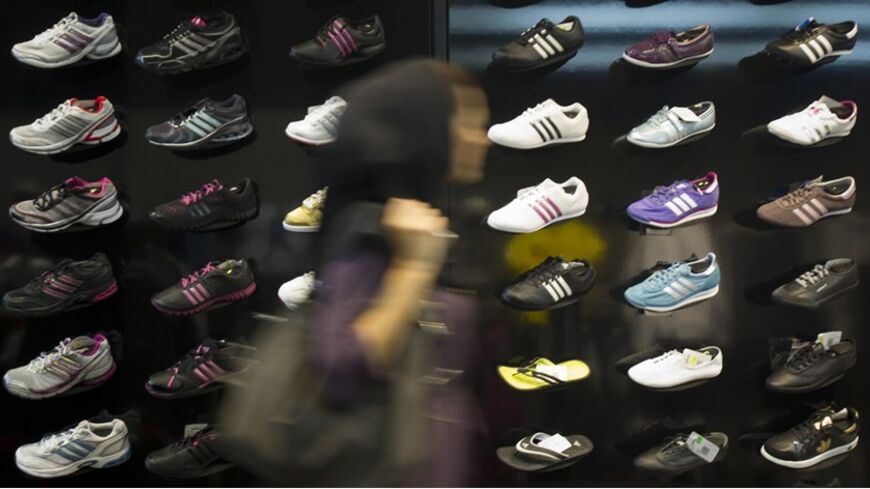 An Iranian woman walks past a window of an Adidas store in northern Tehran, Oct. 24, 2010. - REUTERS/Morteza Nikoubazl

Mahboubeh, a 62-year-old Iranian schoolteacher, was forbidden from traveling outside the country a couple of weeks ago. She has been separated from her husband for three years, after what she describes as over three decades of constant fighting. Since her husband has not agreed to divorce her, he has taken revenge by preventing her from leaving the country, even for a short trip to the United Arab Emirates with a couple of her old friends. Mahboubeh told Al-Monitor she’s fed up with the system that hands over so much authority to men, allowing them to rule women’s lives, even when they are no longer living under the same roof.

Married Iranian women, even if they hold a valid passport, require their husband’s permission to depart the country, regardless of age. For obtaining or renewing a passport, a notarized permit from the spouse is required. Husbands can easily refrain from allowing their wives to obtain or renew their passport.

These terms differ for single Iranian women applying for a valid passport. On Nov. 19, 2013, Majles (parliament) passed a bill — introduced in February 2013 — and thus modified the requirement for women's travel  that existed until then. This amendment required single women to obtain a notarized permit from their father or male guardian each time they were to depart the country. So even though they would possess a passport, they still needed the official permission each time they wanted to travel abroad.

The new requirement angered many women, women's rights activists and even a few female parliament members (MPs) — who are generally conservative and a few of whom had not even originally taken issue with the amended requirement. After much criticism, parliament members started throwing the ball into the government's court, claiming the bill had been introduced to the Majles followed by pressure from government officials. The government shot right back and denied the claim. After much ado, the amendment was revoked.

In justifying the revocation, a few members of the Majles' Women and Family Affairs Committee explained, "They have investigated cases of misconduct and have found them to be few and therefore not worth modifying the existing law." Additional official paperwork and the need for extra resources was also another point that was brought up.

Mehdi Davatgari, an Iranian MP and member of the Majles’ National Security and Foreign Policy Committee, told ISNA news agency, "It is an achievement of the Majles that single Iranian women over the age of 18 can obtain a passport with their father or grandfather’s official permission. Thus, contrary to the previous requirement, once a woman has her passport, she is cleared to exit the country, and there is no need for male permission to be obtained for every departure."

According to Davatgari, this measure would save a considerable amount of red tape. However, if the male supervisor feels strongly about the woman’s travel and is against it, predicting “wrong-doing or misconduct,” he could submit a request to the government to prevent her from leaving the country.

Fatemeh Rahbar, head of the Majles' Women and Family Affairs Committee, also gave her two cents on the matter, saying that the number of women who have misbehaved while traveling outside Iranian borders is too small to restrict every woman's travels: "Around 76 women who have traveled outside the country have behaved inappropriately, and therefore are forbidden from departure without an eligible male's notarized permission for each individual trip. Passports are equal to international birth certificates and cannot be denied to women, unless there is hard evidence proving a woman’s misbehavior outside the country, which we obviously take quite seriously.”

Shahla Mirgalou-Bayat, a physician and member of the Majles' Women and Family Affairs Committee, said passing and implementing these regulations are vital to protecting women and ensuring their safety while traveling.

In a recent interview, Mirgalou-Bayat said that since men could easily tend to their sexual needs through concubines and women cannot, it is safer for women to travel only if they must, and only if cleared by their male guardian. Mirgalou-Bayat added, “Women have different desires and needs than men, and implementing further restrictions for women is actually beneficial to women themselves. I approach this fact as a physician, from a physiological standpoint and considering the difference between male and female bodies.”

Simin is a 33-year-old Iranian divorcee whose divorce decree has still not been issued seven months after the finalization of her divorce. She is pursuing a job opportunity for which she has received an initial offer and needs to travel to Greece for a job interview.

In a phone interview, Simin told Al-Monitor, “I am so frustrated. I’d have no issue if I were either single or had the divorce decree. But since I’m in neither of these positions, I have to suffer. I personally believe that if female members were not elected to the Majles, we women could have a better chance of enjoying basic rights — at least the bare minimum. I think female Majles members are more bigoted toward their own gender than their male colleagues are.”