Outrage erupted in the Gaza Strip after a judge issued a ruling banning unmarried women from traveling without the consent of a male guardian, yet a revised ruling doesn't go far enough, activists say. 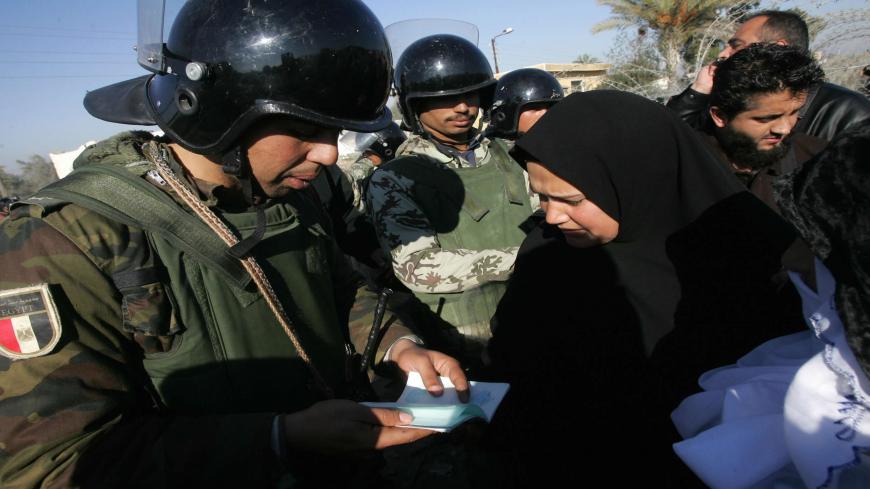 An Egyptian security officer checks the travel document of a Palestinian woman returning home through the one gate that remained open in the newly erected border fence between Egypt and the southern town of Rafah, Gaza Strip, Feb. 3, 2008.

GAZA CITY — A Hamas-backed court in Gaza has backtracked on its decision requiring women to get permission from a male “guardian” to travel abroad after widespread criticism, yet rights advocates say the changes do not go far enough.

On Feb. 10, the head of the Sharia Supreme Judicial Council in the Gaza Strip, Hassan al-Jojo, issued a ruling banning women from traveling outside of Gaza without the consent of a male guardian.

Yet after pressure from international institutions and human rights groups, alongside protests held in front of Jojo’s office in the Gaza Strip, Jojo issued an amended ruling Feb. 21.

According to the amended decision, a male guardian may submit a claim to the judicial authorities if he feels “grave harm” will be done should the woman under his tutelage travel outside the country. The decision to allow the woman to travel or not will be determined by the competent judge, according to the amendments.

The Palestinian Independent Commission for Human Rights on Feb. 15 had called for Jojo to urgently rescind the ruling that he issued.

The initial ruling, which came into effect on Feb. 14, prohibited unmarried “virgins,” previously married women and divorced women who are “not a virgin” from traveling abroad without the permission of a male guardian. In addition, fathers and parental grandfathers were allowed to file legal proceedings to prevent unmarried men aged 18 or over from traveling in case this would cause “grave harm.”

The ruling had sparked public outrage and angry reactions from political, human rights and legal parties, denouncing its content and deeming it as a direct contradiction to the Palestinian Constitution and a violation of Palestinian women’s rights.

The Supreme Judge Department in Ramallah issued Feb. 15 a statement stressing that the travel ban decision in Gaza violates the teachings of Islam, adding that Palestinian citizens are not bound to abide by it and that the judges of Sharia courts ought not to consider it in their judgments and rulings. The department continued that the circular was issued by a party with no legal capacity.

Yusef Salem, the coordinator of the legal department at the Palestinian Bar Association in the Gaza Strip, told Al-Monitor, “The amendment to the [Feb. 10] circular is not satisfactory, as it gives the authority to the Sharia court to issue a final decision on allowing a woman to travel if the guardian files a case stating that there is grave harm in traveling.”

He added, “The circular takes us back dozens of years, and it clearly violates the Palestinian Basic Law.”

"Why should the Sharia court have the final say in allowing or preventing the travel of a woman?” Salem asked.

He stressed that the definition of “grave harm” in the amendment is unclear, which leaves it open to interpretation by the judge. He explained that a judge may be open-minded and allow women to travel, yet others may be stricter and believe that women traveling without the consent of a male guardian is forbidden.

Salem continued, “The criteria that the judge relies upon to determine the ‘grave harm’ must be known to everyone.”

He explained that the amendment was only done to absorb the anger of human rights institutions and the Palestinian people.

“The circular must be canceled immediately and completely, without negotiation, as implementing it is a grave legal violation since any circular must be based on legal justifications that have an origin in the Palestinian Basic Law," he added, stressing the need to launch protests to pressure the judge to cancel the decision.

Regarding the grounds of the ruling, Jojo said during a meeting organized Feb. 16 by the Gaza-based Maryam Center for Culture, “The circular that was published is not in violation of the Palestinian Basic Law nor does it undermine the freedoms affirmed by the law. It is based on the powers of the Sharia judiciary.”

“The circular was issued because there are pertinent lawsuits and cases in the courts that necessitate organizing the community relations within the framework of jurisprudence in the law,” Jojo noted. He explained that the controversial provisions were issued according to the legal texts used in the Ottoman Personal Status Law and the Egyptian Family Law of 1954.

Mustafa Ibrahim, an advocacy coordinator at the Palestinian Independent Commission for Human Rights in the Gaza Strip, told Al-Monitor that redrafting the circular is not enough, as he has to rescind the ruling altogether, because “if the circular remains, the restrictions will remain too.”

“The circular violates the personal freedom of a person guaranteed by Article 11 of the Palestinian Basic Law, whereby the arrest, search, imprisonment or restriction of anyone’s freedom in any way or restricting their movement is not prohibited unless by a judicial order issued by a competent, independent and impartial court in which defendants retain their rights to defend themselves — something that is disregarded in the circular, as well as in the redrafting of the circular,” Ibrahim said.

He added, “By reaching the legal age of 18, children have full legal capacity and their parents cannot prevent them from traveling except in accordance with legal procedures. The freedom of residence and movement is guaranteed by the law in accordance with Article 20 of the Basic Law.”

He added that issuing such a circular is not within the powers of the Sharia Supreme Judicial Council, which does not have any remit of jurisprudence.

“It appears that the circular was issued to respond to one particular case, which should have been dealt with separately without the need to issue a ruling,” Ibrahim said.

Yet it seems there have been unannounced restrictions on women traveling without the consent of a male guardian in the enclave, even before the controversial ruling.

Reem, a pseudonym for a 27-year-old lawyer in Gaza, told Al-Monitor, “I went for training in Egypt last year, and I was surprised that the female police officer at the border asked women to wait in a designated place, and required them to give the phone numbers of their parents to make sure they were traveling with their consent.”

“I could not object to this because otherwise they would not have let me travel,” she said.

Reem recounted that the policewoman who called her mother was provoked when she learned that the latter had given her consent to her daughter to travel. “She asked my mother how she could allow me to leave Gaza by myself and bombarded her with questions, prompting my mother to tell her lies and assure her that we had relatives in Egypt that would receive me,” she said.

“I almost missed the bus transporting women at the crossing because of this interrogation. Luckily my colleagues stopped the bus from leaving the Egyptian terminal,” she added.

Suheir al-Baba, a lawyer for the legal department at the Women’s Affairs Center in Gaza, told Al-Monitor, “It would have been more appropriate for the Sharia Judicial Council to issue circulars on the problems and suffering of Palestinian women — such as custody of children after divorce — instead of issuing edicts violating their dignity and aggravating their suffering. This circular will create several social problems.”

She said, “This ruling comes at a time when Saudi Arabia — a strict Islamic state — has recently abolished the guardianship system, which has been around since the kingdom’s inception, requiring women to obtain permission from a male guardian to travel. And now Gaza is imposing this rule. This should be stopped and rescinded immediately.”

Ezzat Qassem, a feminist activist, told Al-Monitor, “It appears that the circular was issued for specific considerations, and at a time when Palestine is getting ready for elections.”

She said that issuing the ruling without the approval of the authorities in the West Bank reinforces the Palestinian division. “It seems that the decision contradicts the statements of the two sides [Hamas and Fatah] that the division is coming to an end," she said. "The circular reinforces patriarchy in Gaza."

Qassem stressed that violations of the law are common in Gaza in light of inaction by the Hamas government and that whoever issued this circular was well aware that it violates the Palestinian Basic Law and human rights in the Gaza Strip.

Laws should be designed to regulate rights, not to violate them, she said. 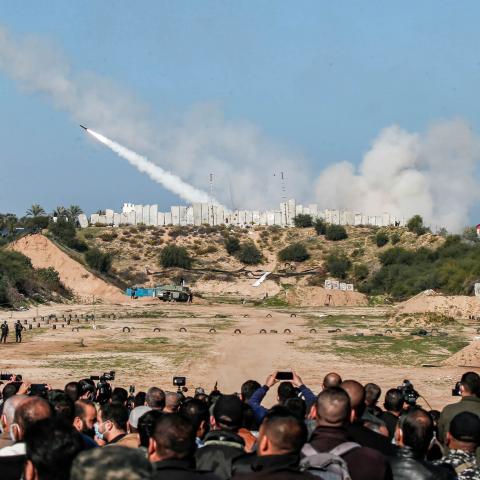 Is Hamas exploiting Libya chaos to smuggle arms into Gaza?