A proposed amendment that offered homemakers without a job outside the house health insurance has been omitted in Iran's budget. 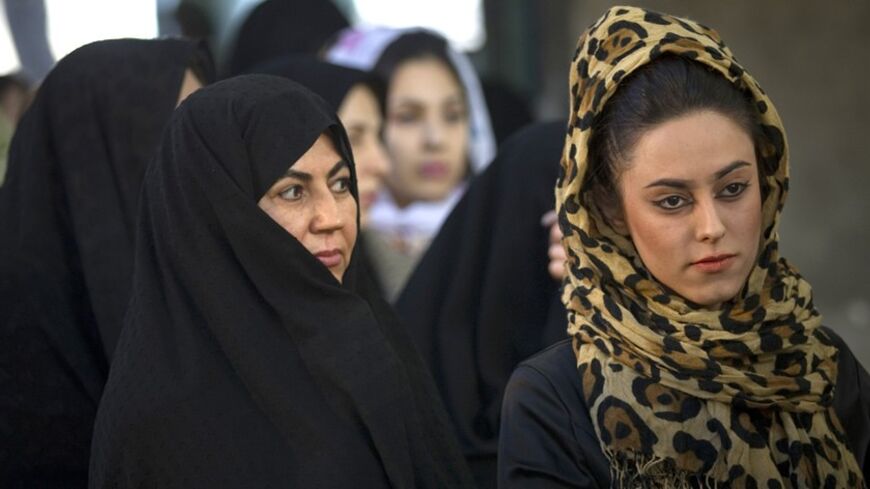 Women wait in line to vote for the parliamentary election in a mosque in south Tehran, March 2, 2012. - REUTERS/Caren Firouz

“A curtailed dream” is the nickname given to the highly publicized amendment omitted from the Iranian new year’s budget act. The amendment would have offered health insurance to homemakers without a job outside the house. It initially passed the Majles (Iranian parliament), but was entirely omitted due to multiple budgetary concerns expressed by the Guardian Council.

The amendment was proposed by women's activists, publicized by women's lobbyists and unanimously agreed upon by the government and members of the women’s Majles faction. Another section of the proposal would have provided health insurance to a minimum of 200,000 households headed by women, who have never been considered for insurance and health benefits.

Prior to its omission from the new year’s budget plan, the budget dedicated to women belonging to this seemingly forgotten group within Iranian society was reduced by 85%. Yet, questions, concerns and disagreements continued to grow and the entire amendment was discarded just before the final steps were taken to finalize the budget for the year 1393.

Some conservatives say the proposal was a thoughtful plan cooked up by Mahmoud Ahmadinejad’s administration and misrepresented by the Hassan Rouhani administration, which failed to present the plan in a convincing fashion while paying close attention to important details, including properly identifying sources of the finances intended for such health insurance plans. That is, according to this group, how the amendment ended up in the trash.

Most moderates and pro-Rouhani women’s affairs activists, on the other hand, say that the Guardian Council’s micromanagement of the plan and nitpicking by some Majles members were the nails to the amendment’s coffin. Also, the source for the women’s health insurance budget was all but unidentified.

“Regardless of different approaches, the outcome remains the same,” Farzaneh, a 55-year-old housewife, told Al-Monitor. “The reality is that I have to grind my teeth and live my worst nightmare, which is to keep living with a man whom I strongly dislike. I have no choice. I was so hopeful that this dream would come true, and I would be able to find a job, even a low-paying one, and get myself out of this misery. But it’s just not happening. It’s impossible,” she said.

Maryam Mojtahedzadeh, head of the Presidential Bureau of Women and Family Affairs, described the fate of the budget plans geared toward women’s health benefits as “a sad failure.”

On a similar note, Iran’s Majles has rejected the administration’s proposal to dedicate 1% of the government’s budget to women’s affairs. In an interview with the Iranian Students News Agency (ISNA), Parvin Hedayati, a women’s affairs deputy of the Rouhani administration, said that efforts aimed at convincing the Majles to approve a mandate for dedicating at least 1% of the government’s annual budget to programs benefiting women were unsuccessful. Hedayati added that the government’s preference had been that members of parliament, particularly members of the women’s faction, would adhere to this proposal and be proactive in convincing their colleagues to support such a mandate. She also said, “But, overall, we consider the approval positive.”

The Majles has approved the bill to allow all governmental organizations to spend up to 1% of their budget in the Iranian new year on women-related programs. A mandate, however, is not being implemented. Thus, organizations are free to determine the amount they plan to spend on such programs, which must not exceed the limit of 1% of their annual budget.

Article 230 of the Fifth Development Program initially designated for women’s rights and benefits received an amendment inserted by the Majles, broadening the spectrum of eligible projects to be inclusive of youth programs, thus leaving less for women.

On the other hand, Fatemeh Rahbar, head of the Majles’ women’s faction, has described the faction’s efforts as plenty and fruitful. In an interview with the Iranian Labor News Agency (ILNA), Rahbar named one of the most significant instances of these efforts: submitting the proposal to extend maternity leave to nine months for government workers.

Rahbar, a representative of the people of Tehran in the Majles, added that the budget specified for women has remained unchanged compared with last year, but that there may be some modifications planned within different organizations as to which area they would plan to spend more or less on. Despite the overall positive conclusion of the head of the women’s faction, Rahbar clarified that no change in the budget equals less money for maneuvering, and expressed concern over the fact that due to inflation, seminaries for women would practically be receiving at least 4.5% less than what they received last year.

Noushin, an active feminist residing in southern Iran, told Al-Monitor that a large group of Iranian women are deeply disappointed in the way the government and their representatives in the Majles approach and take action — or inaction, rather, she added — toward more than half of Iran’s population. Nousin said in a telephone interview, “The fashion in which both the administration and the Majles approach women’s affairs is a familiar repetition of implementing and strengthening patriarchy in society. “Combined with Islamic laws,” she added, “women are — by and large — slighted, as they have been for over three decades.”