Although musicians on a TV show on Jan. 19 were only shown for a few seconds, it has created a stir and rekindled debates about Islam and music. 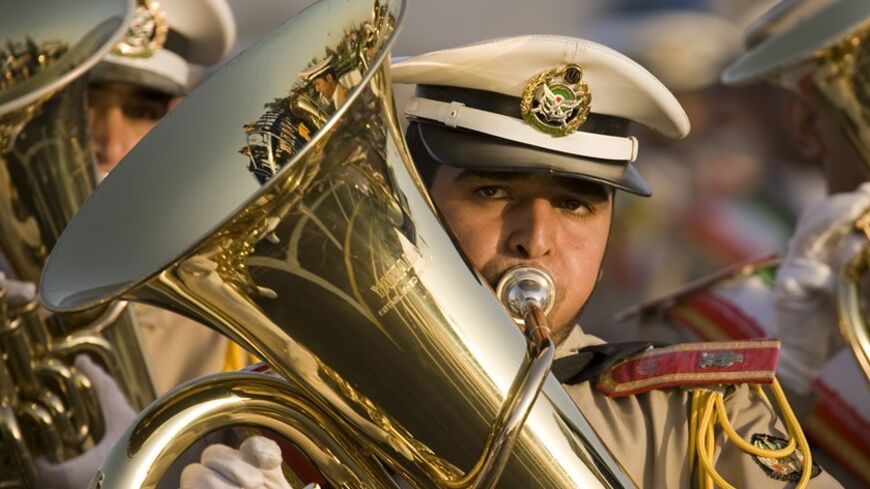 A member of the military band plays his instrument during a military parade to commemorate the anniversary of the Iran-Iraq war in Tehran, Sept. 21, 2008. - REUTERS/Caren Firouz

The morning of Jan. 19 is now regarded as a milestone in the history of the Islamic Republic of Iran Broadcasting (IRIB). On the TV morning show “Sobh bekheir Iran” (“Good Morning Iran”), the band Avaye Baran was seen performing for — according to most sources — a few seconds. Almost instantly, the Internet was abuzz and speculation began, interpreting this as a "turning point" following President Hassan Rouhani's efforts to break through rigid regulations.

By the same token, many hawkish critics have harshly criticized this “incident” as what they call a "mishap." Some political hard-liners and religious conservatives disapproved and deemed the airing of the performance outrageous.

Shortly thereafter, in an interview with the FARS news agency, Gholamreza Bakhtiari, the show's executive producer, "claimed responsibility" for airing the musical instruments and, in response to those who had wishfully attributed this breakthrough as being a by-product of Rouhani's softer policies, announced that IRIB's policies toward airing musical instruments remain unchanged. He added that he is ready to face the consequences of what he called his error.

While Sunni clerics do not consider music haram (sinful), some conservative Shiite clerics do, and performing or listening to any type of music other than the likes produced by a marching band is forbidden.

Islam had been declared the reason for the off-limits status of music. Ayatollah Ruhollah Khomeini adopted a different view on music and more songs and instrumental pieces were aired on TV toward the end of his life. Showing instruments was still forbidden, as was showing women singing solo. Red lines were generally defined by lyrics rather than tunes.

To explore the Islamic aspects of airing music, I interviewed Mohsen Kadivar, an Islamic scholar, Shiite cleric and legal expert who lectures at Duke University. Kadivar said, ”There are three different Islamic approaches to music. One is the conservative approach, established and followed by clerics such as Ayatollah Golpayegani and nowadays Safi-Golpayegani who forbid playing or listening to any kind of music. The second is that of a less restricted mind-set, allowing some forms of music with “less materialistic lyrics” to be made and played — the approach adopted by Khomeini. The third group does not deem any kind of music haram and considers the circumstances in which the music is played or heard the key element in defining sinful activities, not mere music.”

Kadivar told Al-Monitor that his personal point of view on music is aligned with the third group, particularly since there is no direct association of music and sin mentioned in the Quran.

The Islamic scholar said Sunni clerics have not banned music, partially because throughout history they have ruled and were well aware that the presence of music is an inevitable part of political dominance.

Shortly after the Islamic Revolution in 1979, and especially after the Iran-Iraq war broke out in 1980, most of the music aired on radio and TV was revolutionary and patriotic — pretty much only marching music.

In the years without satellite TV and even CDs, sounds that would excite children and teenagers were revolutionary pieces broadcast on television around the anniversary of the 1979 revolution; still, most of those were far from smooth. Joy-hungry, art-deprived youth, however, had to make do.

In the mid-1990s, when Akbar Hashemi Rafsanjani was president and his brother, Mohammad Hashemi, was the head of IRIB, the tight leash on music was somewhat loosened and the spectrum of music that hit the airwaves became more varied. However, airing musical performance or even showing mere musical instruments was still strictly off-limits.

Ali Asghar Ramezanpour, a former deputy of the Iranian Ministry of Culture and Islamic Guidance, told Al-Monitor, "Iranian TV has a broadcasting supervisor for every single live or recorded show that is aired. So it's virtually impossible for an executive producer to individually make such a bold decision on his own." Ramezanpour continued, "Obviously, this IRIB employee has been instructed to take the blame and an interview has been arranged with FARS for his supposed explanation."

Ramezanpour told me he considers this move to be similar to Rouhani's approach to the nuclear issue. "But this has to somehow be 'justified' to silence the criticism," Ramezanpour said.

Many experts — among them a number of psychologists — believe that concealing musical instruments limits people's relationships with the sentimental characteristics of music. Ramezanpour elaborated, "Concealing the act of performing music is a type of brainwashing that the regime enforces. When viewers solely hear the notes rather than seeing them being played, and this policy is strictly enforced decade upon decade, the likelihood of sympathizing with music would become considerably low among the general public whose primary source of entertainment is antenna TV."

Ramezanpour attributed a major portion of the softening effort on the part of Iranian TV to the tough competition IRIB faces from the colossal presence of satellite TV and Western music in Iranian society, and to the undeniable fact that given IRIB's limitations — technically, financially and in terms of coverage — winning this tough competition is practically impossible.