The visit of Turkish Prime Minister Recep Tayyip Erdogan to Tehran will offer an opportunity to defuse tensions on Syria while expanding economic relations. 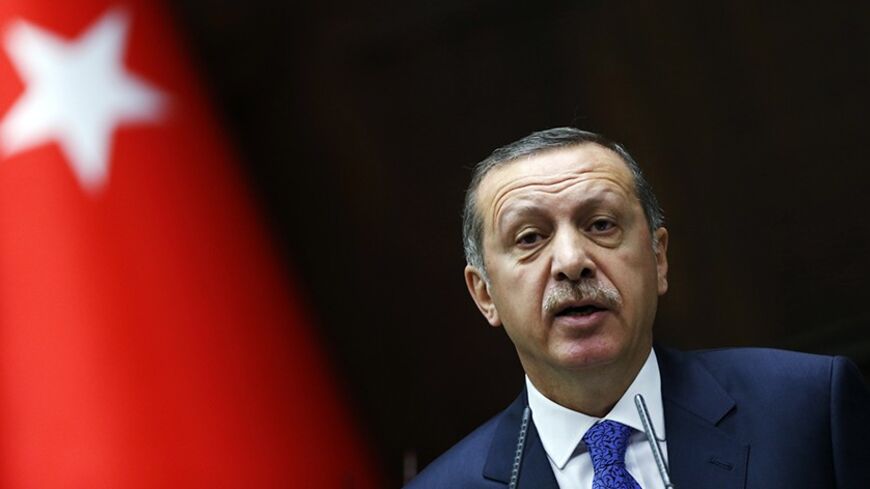 Turkey's Prime Minister Recep Tayyip Erdogan addresses members of parliament from his ruling party during a meeting at the Turkish parliament in Ankara, Jan. 28, 2014. - REUTERS/Umit Bektas

All eyes are on Turkish-Iranian ties due to Prime Minister Recep Tayyip Erdogan’s two-day visit to Iran that began Jan. 28 with a view toward advancing bilateral cooperation despite serious differences on a number of issues.

To start, the two countries are at odds over Syria, unreservedly supporting opposite sides in the conflict and having fundamentally different positions on the future of President Bashar al-Assad. While Ankara hopes for the demise of Assad and his regime, Tehran is clearly working to ensure that both remain in power in any settlement reached.

Ankara ostensibly supports Iranian participation in the Geneva II talks, as Foreign Minister Ahmet Davutoglu has said on a number of occasions. Diplomats, however, doubt Ankara’s sincerity, observing that it is easy for Davutoglu to take such a position when he knows there will be others vehemently opposed to Tehran participating. Davutoglu’s support for Iran in regard to Geneva II is therefore said to have less to do with the Syria crisis and more to do with Ankara’s desire to maintain good ties with Tehran, especially in the area of economic and trade cooperation.

Turkey and Iran are also at odds over NATO’s US-controlled, state-of-the-art antimissile radar system, which is deployed in Turkey against a threat from Iran. Turkey’s insistence that the system does not target Iran is not accepted in Tehran — or anywhere else for that matter, given statements from NATO officials belying such assertions.

High-ranking Iranian military and security officials have warned Turkey on a number of occasions in the past few years of serious retaliation in the event of an attack against Iran by the United States or Israel, the presumption being that NATO’s Turkey-based antimissile system would be used in such an operation. Gen. Amir Ali Hajizadeh, a senior commander in the powerful Iranian Revolutionary Guard Corps and the head of its aerospace division, said in November 2011 that Iran would hit radar installations in Turkey if the United States or Israel attacked Iran.

The Middle East's growing sectarian divide, which has been fueled by the turmoil in Iraq and the chaos in Syria, also puts Ankara and Tehran on opposite sides of the fence. Saudi Arabia and Iran are locked in a bitter competition along this divide and are currently engaged as the two key regional powers in a proxy war in Syria.

The fact that the Erdogan government stands firmly with Saudi Arabia with regard to this divide and is also supporting the Sunni opposition in Syria has been a latent point of tension between Ankara and Tehran. As the Geneva II talks kicked off in Montreux Jan. 22, Iranian President Hassan Rouhani, whose country was not invited to the talks, tweeted that states sponsoring what he called terrorism in Syria should stop doing so. His statement clearly referred to Turkey, given that the government-controlled Iranian media has been pointing to Ankara as one of the leading supporters of the predominantly Sunni opposition in Syria.

The Syria issue was the cause of some “friendly barbs” exchanged by Davutoglu and his Iranian counterpart, Mohammad Javad Zarif, during a Jan. 24 panel at the World Economic Forum in Davos. When Davutoglu criticized the argument that Hezbollah was in Syria to protect Shiite holy sites, Zarif responded, “You cannot expect the Shiites to remain silent after you send people who destroy Shiite tombs,” prompting the moderator of the panel to assert, “Here it is, the Sunni-Shiite conflict in Davos.”

Ankara’s unwavering support for the Muslim Brotherhood in Egypt is another sore point with Iran. Shortly after the July coup in Cairo, Hossein Nakavi, spokesman for the Iranian parliament’s Commission on National Security and Foreign Policy, warned that Turkey’s support for ousted President Mohammed Morsi “would land Turkey in a crisis.” There was little love lost in Tehran over Morsi when he was in power and pursued a strong Sunni line, which was reflected in Cairo’s approach to regional issues of much concern to Iran, starting with Syria.

Despite serious differences between Turkey and Iran in the political sphere, Erdogan’s visit nevertheless shows that it is ultimately “business as usual” between the two countries in the literal sense of the word.

Syria, developments in the Middle East and Iran’s nuclear program and agreement with the UN Security Council were expected to be addressed in the talks Erdogan has in Tehran with Supreme Leader Ayatollah Ali Khamenei, Rouhani and other officials. With few areas of political agreement on the Middle East, the only one left for any serious improvement in ties for their two countries is in the economic sphere. The main focus of Erdogan’s visit is therefore expected to be economic cooperation.

The easing of Western sanctions against Iran has created a host of business opportunities that have whetted Turkey’s appetite. That Erdogan is being accompanied to Iran by his ministers for the economy, energy and development underscores this.

Iranian Deputy Foreign Minister Ibrahim Rahimpur told reporters before Erdogan’s visit that five cooperation agreements would be signed with Turkey and that the trade target between the two countries, currently $20 billion, will be increased to $30 billion as of 2015.

Press reports indicate that Iran is also interested in establishing a “free trade zone for energy” within Turkey. The natural gas that Turkey purchases from Iran — its second largest supplier after Russia — has led to a significant trade deficit to Turkey’s disadvantage, so Ankara wants to redress this situation by increasing its exports to Iran.

With Erdogan facing a potential economic meltdown at home, he needs to secure as much business as he can for Turkey. Hard currency invested in Turkey as “hot money” has begun fleeing due to a combination of the turbulence generated by Erdogan’s policies at home and recent decisions by the US Federal Reserve. To shore up the Turkish lira, which has gone into a tailspin against the dollar, and to make up for losses caused by the flight of hot money, Turkey has to increase foreign capital inflows. Increasing exports to and entering into lucrative joint projects with Iran is one way to achieve this.

It's no wonder, then, that David Cohen, the US secretary for terrorism and financial intelligence, hurried to Ankara on Jan. 27, the day before Erdogan was due to travel to Tehran, warning that “Iran is not open for business yet” despite the easing of sanctions. Washington has been unhappy with Turkey’s economic and trade ties with Tehran and the way Ankara has been circumventing US sanctions to pay for oil purchased from Iran by other means, including gold shipments through state banks. The United States has blacklisted some Turkish companies because of their dealings with Iran.

Turkey, however, has continued to promote trade with Iran regardless of US pressure, and this is what clearly concerns Washington. “Businesses interested in engaging in Iran really should hold off. The day may come when Iran is open for business, but the day is not today,” Cohen told reporters after his talks in Ankara with senior Foreign Ministry officials.

It is unlikely that Ankara will pay much heed to this warning, given that Erdogan desperately needs all the foreign business Turkey can get and that that is something the United States cannot provide. Despite the positive prospects for Turkish-Iranian business ties, strains over issues relating to the Middle East, especially Syria, will nevertheless remain a major thorn in the side of political relations between the two countries for the foreseeable future.