What has Erdogan learned from Soleimani's killing?

As tensions between Tehran and Washington escalate, Turkey has to make difficult choices. 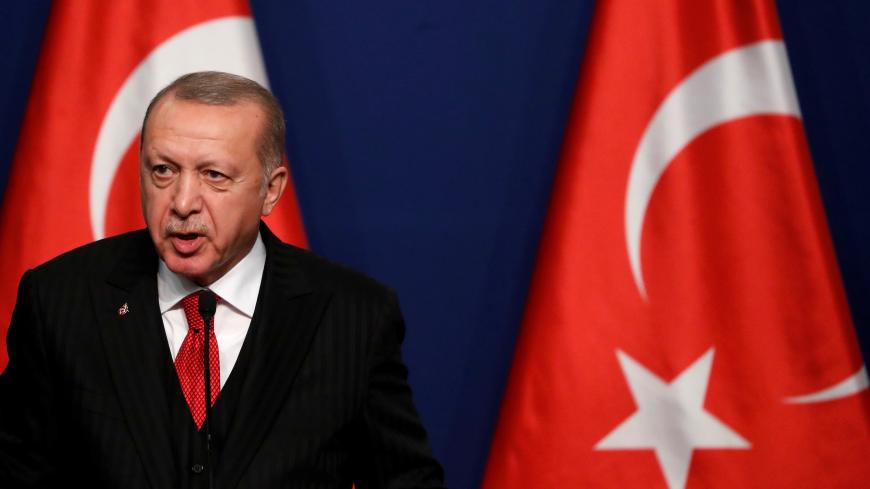 Turkish President Recep Tayyip Erdogan broke his silence on the killing of top Iranian commander Qasem Soleimani on Jan 5. Erdogan’s interview was well-prepared: He was respectful toward the slain major general but also was restrained.

Yet while Erdogan’s words showed sympathy for the commander, Turkey’s pro-government media has been demonizing Soleimani, portraying him as a murderer of Sunni Arabs and a former collaborator of the United States. Erdogan said Soleimani had no intention of being a caliph and had proven himself as a commander. While Iranian reports said Erdogan had referred to Soleimani as a martyr, Turkey said this was not the case. And Erdogan, who spoke with US President Donald Trump hours before Soleimani was killed, made clear that he was not made aware of the US plans, saying the Iranian commander's death came as "a shock.” Although Turkey did not send any officials to the funeral, Erdogan said he had advised caution to both Iraq and Iran. He also added that he believed Iran would respond to the killing.

This indeed occurred Jan. 8, when Iran launched Operation Martyr Soleimani against two US bases in Iraq.

There are two crucial questions about Turkey as this earthquake hits the region. First, where will Erdogan stand as the conflict between the United States and Iran escalates?

Iranian President Hassan Rouhani’s call for unity against US aggression with friends and neighbors was rebuffed by pro-Erdogan columnists. Hilal Kaplan, a columnist for Sabah who frequently accompanies Erdogan on his trips abroad, wrote that Turkey would not join in Rouhani’s call for resistance against the United States. Other columnists followed her line, penning pieces declaring that this is not Turkey's fight; other conservative media outlets questioned whether it would be wise to get involved.

It is significant that Sabah Daily also ran a piece that cautioned against sectarianism; political elites are divided in Turkey, with some saying that Soleimani should be mourned even if he was Shiite and Turkey is predominantly Sunni. There is a rift over how to deal with the aftermath of his death, and numerous questions. Did Iran help Erdogan during the 2016 coup attempt? Did Iran support the Kurdistan Workers Party or the Syrian Kurdish People's Protection Units? Was Soleimani the reason why Turkey lost in Syria? Or did he help curtail Islamic State (IS) attacks on Turkey? Pro-government figures have started to question all these landmark events in an effort to reconstruct the Turkish approach to Iran.

To complicate matters further, a piece published by The Intercept, based on documents from Iran's Ministry of Intelligence and Security (MOIS), claimed Soleimani was fond of former Turkish Prime Minister Ahmet Davutoglu and director of intelligence Hakan Fidan. Davutoglu now has formed his own political party.

A senior bureaucrat in Ankara told Al-Monitor, “There was a good, respectful working relationship between Fidan and Soleimani, as with other counterparts. Yet, I would have thought the admiration was the other way around before these alleged MOIS documents were revealed. I guess now we see the feeling was mutual.”

Other officials said the Quds Force, which had been under the command of Soleimani since the late 1990s, was seen as both a military organization to be reckoned with and an idea that inspired Ankara.

One senior official said, “Soleimani reached out to militias, Shiite but also others such as Hamas [Sunni] in ways that formed a strong allegiance. We tried to understand how he did it. We studied several videos in Arabic his team shot after 2013 to convince Arab audiences to join the fight against IS. Soleimani worked for Iranian interests and some of them were in conflict with ours, but his methods and his dedication were of interest to Ankara.”

So how did the killing affect Erdogan and his immediate circles? Officials Al-Monitor spoke with concurred in saying that the initial reaction was fear. “Trump topped the unpredictability scale,” said one senior bureaucrat. Ankara seems to understand the message that not all that Trump says on Twitter is a bluff.

If any senior military official can be eliminated within seconds on orders of Trump and be declared a terrorist, what does this say about the future of Turkish military intervention in Libya? Another issue was the realization, contrary to Erdogan’s hopes, that the United States is not leaving the Middle East anytime soon. Ankara’s plans designed on a US departure will have to be recalibrated.

The next issue is how the escalation will affect Turkey’s relations with other players in the region. Iran wants to count on Turkish support against the United States, said Gulriz Sen, assistant professor of International Relations at Ankara’s TOBB University. “According to some Turkish media outlets, the representative of Supreme Leader [Ayatollah Ali Khamenei] was to meet with the members of anti-American, ultranationalist political parties to shore up support for Iran. Besides, one of the major expectations of Iran from neighboring countries is to prevent any sort of attack being launched on Iran from their bases,” Sen told Al-Monitor.

During the early hours of Jan. 8, as Iran launched missiles onto the US bases in Iraq, the Islamic Revolutionary Guard Corps announced a four-item memorandum. One of the conditions said Iran is warning that any country that allows US forces to use its soil to attack Iran will in return be targeted.

“[The] US military's heavy use of Turkish airspace for its resupply mission in Iraq and elsewhere suggests that the Trump administration will continue its policy of not taking harsh action against Turkey while the US is actively confronting Iran,” said Micha'el Tanchum, a senior associate fellow at the Austrian Institute for European and Security Studies.

What China and Russia will decide on Iran is also important. Erdogan is now in a weaker position to challenge Trump as well. Tanchum added the Libya factor in Ankara’s decision-making, saying, “As long as Turkey does not significantly undermine US policy toward Iran, the US unlikely to directly challenge Turkey's operations in Libya.”

If the United States enforces further sanctions against Iran and possibly Iraq, as Trump suggested, Turkey could be even further pressed to make a choice. For sanctions to work effectively, the United States tries to compel compliance from all other players, particularly neighbors.

Tanchum summarized Turkish-Iranian economic relations by saying, “In 2018, Iran was Turkey's sixth largest trading partner, with the total volume of trade being slightly less than half the Turkey-US bilateral trade volume. As a result of the 2019 maximum pressure sanctions, Iranian capital has been flowing to Turkey. Iran accounts for the largest number of new foreign joint ventures in Turkey, for example.”

Vahid Yucesoy, a doctoral degree candidate in political science at the University of Montreal, told Al-Monitor that despite Turkish and Iranian differences in Syria, “Ankara and Tehran have various reasons to collaborate regionally, especially on the Kurdish issue. This was evidenced by both countries’ common interests in preventing an independent Kurdistan after the Kurdish referendum in northern Iraq. Their lack of trust in the American administration and their common opposition to the Saudi dominance of the region are other factors that are likely to keep the relations afloat.” Indeed, how Turkey will balance its relations with Iran depends much on the health of its continued alliance with Qatar and whether it can mend bridges with Saudi Arabia and other Gulf Cooperation Council (GCC) countries.

Although there are several factors at play when it comes to how Ankara will make its decisions if the conflict between Iran and the United States escalates, these choices could depend in a major way on how much Turkish officials learned from Soleimani’s methods of running the Quds Force.

An example from recent history may help explain this. In January 2012, Hamas’ departure from Damascus was a jubilant moment for Ankara but one that disappointed Tehran, which was backing Syrian President Bashar al-Assad. Over the years, Erdogan's Justice and Development Party governments have supported Hamas despite international criticism. But Hamas now openly mourns the death of Soleimani and declares its support for the resistance, indicating a strong allegiance to Iran. Ankara has observed over the longer haul how Iran’s more understated moves have turned out to be more successful than strident and rash declarations and actions.

The learning curve of the Syrian civil war has been a steep one for Ankara. However, if conflict between Tehran and Washington compels Ankara to take sides, Erdogan's level of success in this could largely depend on how well he can manage his team, particularly the National Intelligence Organization, to continue some degree of coordination with Iran while not alienating the United States. In his Jan 5 interview, Erdogan repeatedly emphasized the value of utilizing diplomacy, which contrasts with his erratic unilateralism of recent years. As the stakes in the region come into greater focus, Erdogan may find it wiser to speak with less missionary zeal.