Turkish President Recep Tayyip Erdogan was cautious in his first comments on the US killing of Iran’s Qasem Soleimani, criticizing the move but being careful not to align Ankara with Tehran. 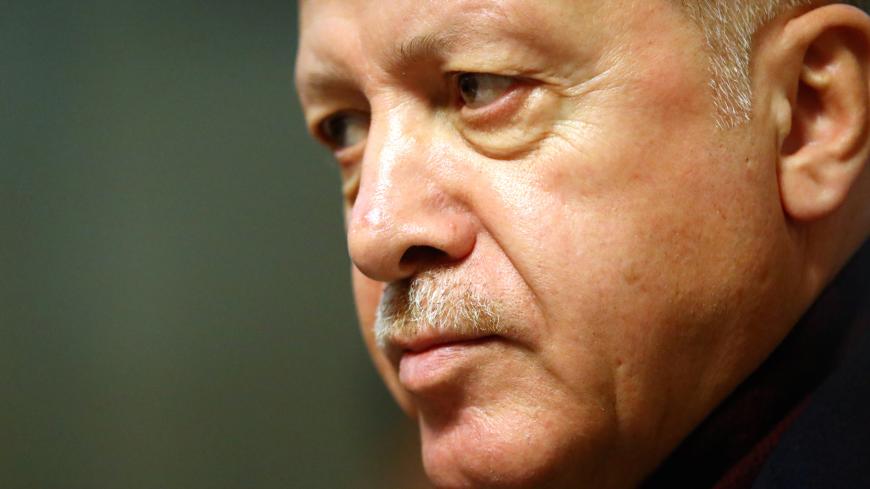 In his first detailed comments on the killing of Iran’s most celebrated commander Maj. Gen. Qasem Soleimani in a US drone strike on Jan. 3, Turkey’s President Recep Tayyip Erdogan criticized the move, saying it aggravated regional tensions and that his death had come as “a shock.” The Turkish leader’s messages during an hour-and-a-half-long interview aired Sunday on the government-friendly CNN Turk were cautiously worded but left no doubt that he doesn’t want his country embroiled in a conflict between the United States and Iran.

Erdogan said, “Soleimani is an individual who proved himself and one who was accorded extraordinary value by [Iran’s Supreme Leader] Ayatollah Ali Khamenei. I believe that the killing of a state’s commander cannot go unanswered. The choice that [the United States] made was ill advised and has increased tensions.”

Today, Erdogan’s Justice and Development Party spokesman Omer Celik reaffirmed Turkish disapproval, saying, “With this attack a phase of greater violence has begun. Despite everything, Iran was talking to the European Union to [salvage] the nuclear agreement.”

Iran announced on Sunday that it that it will no longer be bound by the uranium-enrichment limits under the terms of the nuclear deal from which the Donald Trump administration withdrew in 2017. Many believe the move triggered the spiral of hostility that resulted in Soleimani’s assassination.

Erdogan said he had counseled Trump not to escalate tensions with Iran in a telephone conversation that took place around five hours before Soleimani was struck near the Baghdad airport together with Abu Mahdi al-Muhandis, the Tehran-backed deputy leader of Iraq’s Popular Mobilization Units. Muhandis also perished in the attack.

Erdogan stated that Trump had made no mention of his plans to assassinate Soleimani during the call. “I was shocked,” he said.

Turkey is in a delicate position. Its relations with Iran are complex. The countries are historical rivals, as witnessed most recently in Syria, where Turkey unsuccessfully sought to overthrow President Bashar al-Assad, and Iran fought alongside him with Shiite militias organized by Soleimani. Yet with restive Kurdish populations of their own, both regional powers have a shared interest in preventing the United States’ Syrian Kurdish allies from winning political autonomy and are now part of the Russian-driven Astana process to keep Syria territorially intact.

The issue has become Ankara’s top priority in Syria, where Erdogan said Turkey has “cleansed 8,200 square kilometers of terror.” He was referring to territory occupied by Turkish forces to dislodge the Islamic State and the Syrian Kurdish People’s Protection Units (YPG). Turkey calls the group a terrorist organization and has vowed to eradicate its presence from along its border with Syria because of the YPG’s close relationship with another Kurdish group that has been waging a 35-year insurgency within Turkey.

During the CNN interview, Erdogan huffed at the United States over its continued military assistance to the YPG, saying the Pentagon had provided the militia with 33 truckloads of weapons “for free.” How could the United States help a terrorist organization while targeting an Iranian official for being a terrorist, he asked.

Yet Erdogan was careful not to critique Trump personally. The US president is virtually Erdogan’s sole friend in Washington, where congressional calls to sanction Turkey over a variety of its perceived misdeeds, most notably its purchase of Russian-made S-400 missiles and its latest assault against the YPG in northeastern Syria, have been growing louder by the day. A multi-billlion-dollar oil-for-gold scheme facilitated by Turkey's state lender Halkbank to help Iran evade sanctions is another source of ire. Allegations that Turkey's spy boss Hakan Fidan passed Iran information on Israeli spies haven't helped.

Erdogan acknowledged that a sympathetic Trump “wants to help” block sanctions against Turkey.

But he may now expect payback, reckons Gulriz Sen, an assistant professor of international relations at Ankara’s TOBB University. “Trump will pressure Erdogan to side with him against Iran. Turkey is already complying meticulously with US sanctions and not buying any Iranian oil," Sen told Al-Monitor. Some speculate the next demand may be for Turkey to halt natural gas imports from Iran,  though Sen believes this is unlikely in the near term.

Iran’s President Hassan Rouhani reportedly exhorted Turkey to pick sides in a Jan. 4 telephone call with Erdogan and allegedly called upon him “to fight together against America’s insolent moves.” The government did not comment on the claims carried by Russia’s Sputnik but a Turkish official denied that Erdogan had referred to Soleimani as a martyr when presenting his condolences to Rouhani.

Some analysts suggest that the Soleimani affair may prove an opportunity for Turkey to trade its spotty international image as a regional bully for one of regional peacemaker in a replay of its 2010 effort with Brazil to broker a deal with Iran over its nuclear program that was rebuffed by the Barack Obama administration. It may also restore Turkey’s strategic value in America’s eyes, observed prominent political scientist Mensur Akgun.

“The importance of Incirlik and Kurecik may be better appreciated. The administration and the Senate may be better disposed to address Turkey’s interests and expectations,” Akgun opined in a column for the mildly oppositionist daily Karar. Incirlik is a Turkish base used by the United States and NATO for missions in Iraq, Syria and Aghanistan and Kurecik is a radar installation that helps monitor Iran.

But the situation is dramatically different now and Turkey is not enough of a heavyweight to play peacemaker between Washington and Tehran, argued Sen. “Iran would prefer to have a more influential actor like Russia,” she said. In any case, many of the same people in Washington who have been exhorting Trump to get tough with Iran have been urging the same for Turkey as a defiant Erdogan, seemingly bent on restoring his country’s erstwhile Ottoman glory, keeps putting down boots in the Middle East.