As Turkey and Iran's interests align their cooperation is expanding, but their newfound friendship won't last unless their potential for rivalry is curtailed. 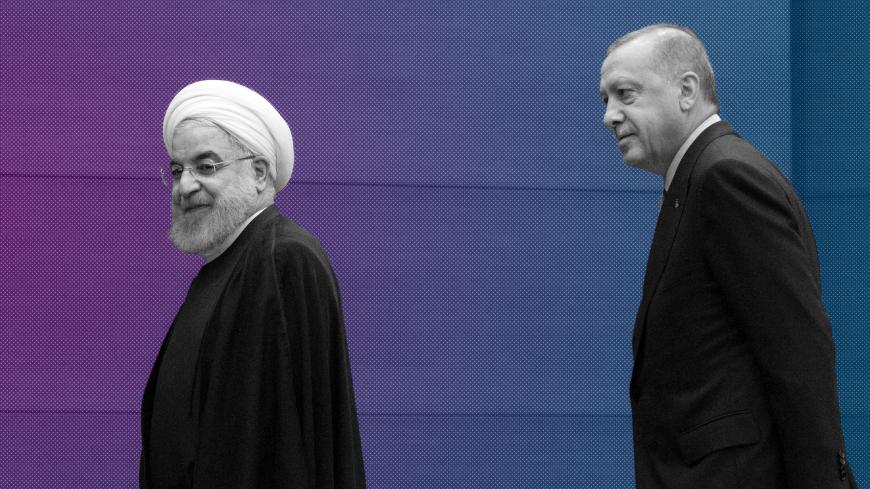 At a time when Turkish President Recep Tayyip Erdogan is getting the cold shoulder from most Arab states and Iran is crushed under the US administration's tightening sanctions, we might expect a strong embrace between these two non-Arab countries. And glancing over the headlines, it seems like Ankara and Tehran are on the way to being best friends, courtesy of Russia. The regional common denominators provide crucial ample opportunities for cooperation. Expanding bilateral relations on tourism, regional security and cultural exchanges could benefit both countries.

Yet, there are many challenges behind the smiles of Erdogan and Iranian President Hassan Rouhani, who meet regularly as part of trilateral Astana summits. We rarely hear about sustainability of Iranian-Turkish rapprochement in the media. The relations between the two are anything but stable. For example, Erdogan has changed sides on the Yemen conflict completely. In 2015, he had even proposed extending logistical support to the Saudi-led coalition, whereas on Sept. 18 he was arguing Saudi responsibility in the Yemen conflict as a reason for the attack on its oil fields.

A high-level bureaucrat from the Turkish Ministry of Foreign Affairs told Al-Monitor, “The most important matter [between Iran and Turkey] is how to find a common ground in Syria. Turkey no longer calls for the ouster of [Syrian President Bashar] al-Assad. Yet, Tehran is not happy about our presence in northern Syria. Can Tehran play the role of broker between Ankara and Damascus? If Russia allows that, it may be possible. It will depend on how they approach the [Kurdistan Workers Party] PKK, which Turkey considers a terrorist organization and the same as other Kurdish groups in the region such as the YPG [People’s Protection Units].”

Gulriz Sen, assistant professor in the department of political science and international relations of TOBB University in Ankara, told Al-Monitor, “Despite much talk and attempts to bolster bilateral cooperation on the Kurdish issue, which is conceived as a grave security challenge for both countries, cooperation remains limited. The latest example has been the declaration of a joint operation by Turkish-Iranian forces against the PKK in March 2019. However, Turkey’s statement has been rejected by Iran’s armed forces several times and Tehran refrained from giving clear details about the extent of the cooperation.”

She explained, “On the Kurdish issue, Iran is wary of the growing Salafism among its Kurdish population who were implicated in the [Islamic State] attacks in Tehran back in 2017 as well as rejuvenation of the dormant Kurdish secessionism and activism as witnessed with the frequent border clashes between the IRGC and the Kurdish groups based in northern Iraq. Tehran’s concerns were further raised with Donald Trump’s presidency, for news of Iranian Kurds in contact with Washington is seen as an ominous sign of US meddling in ethnic fault lines of the country to weaken the regime.”

Sen elaborated on why Iranian relations with the Kurdish groups are specifically crucial for Damascus-Ankara rapprochement. “During the civil war in Syria, [the Democratic Union Party] PYD has become a tactical partner of Tehran against IS, yet following the defeat of IS, Tehran is now more concerned with the PYD-US connections and it supports reconciliation between Syria’s Kurds and the Assad regime, so that the regime can establish control over every inch of the country and dilute the presence of the US in Syria. Recently there are also talks reported in Oslo between Iran and its Kurdish opposition.” If Iran is on the path to a compromise with the Kurds, it may make it all the more difficult for Ankara to sustain its relentless oppression of them.

Another academic from Ankara with close connections to the military intelligence community who asked not to be named said, “Erdogan needs a graceful exit out of the Syrian quagmire and a savvy justification to officially acknowledge the Assad regime. If he can justify it domestically, he may even sit at the table with the Assads. One possible way is seen as Damascus stepping up in its efforts against the YPG and its affiliate groups, therefore promising to control possible attacks into Turkish soil. We are pretty much talking about returning to the status quo between Syria and Turkey prior to the civil war. If Iran is the guarantor of such a precarious deal, it may help establish direct Ankara-Damascus talks.” The academic also highlighted that both the Iranian and the Turkish governments have stood in solidarity to support Qatar, and that Iranian officials’ prompt phone calls after the July 15 coup attempt to back Erdogan were crucial. “This help him forget the public accusations of Iranian hard-liners [alleging Turkish support for IS] and diminish mistrust against Iranian officials. It was a litmus test for Erdogan's friends, and Iran passed it.”

Ankara bureaucrats are now studying whether the Kurdish problem within Syria's borders could again be delegated to Syria. Iran could play a critical role in this scenario. It seems Ankara is no longer able to compete with Iran for influence in Syria as Iranian-Syrian relations expand to establish a joint banking system.

Trying to abide by US sanctions on Syria and Iran is a serious burden for the Turkish economy. Sen explained that bilateral cooperation took place in the field of economy and energy rather than in the political sphere. “Turkey, despite its criticism, complies with the US sanctions on Iran oil and has embarked on replacing its oil suppliers. Bilateral trade volume remained low and far from the stated goal of $30 billion in spite of the preferential trade agreement that came into effect in 2015 and the brief sanction-free era after the nuclear deal,” she added.

Vahid Yucesoy, a PhD candidate in political science at the University of Montreal, emphasized that rivalry over the central Asian republics is another potential hurdle for bilateral relations. “The jockeying for influence by Turkey and Iran in central Asia has especially gained momentum after the collapse of the USSR and the emergence of the newly independent central Asian states. Turkey had appealed to many of the Turkic states of central Asia by virtue of a flourishing economy and a secular-democratic model, while Iran had retained a weaker influence and even at times entertained conflictual relations with states like Azerbaijan, Uzbekistan and Tajikistan for its attempt to import Shiite Islam,” Yucesoy explained.

The total value of projects realized by Turkish contracting companies in the region has exceeded $86 billion. Close to 4,000 Turkish companies have been operating on the ground. Yucesoy added, “More importantly, while Turkey is still very seriously engaged in economic projects in the region, politically, serious cracks have appeared in relations. Turkey’s attempts to export its religious influence in the region through its Diyanet created friction.” To make matters more complicated, Yucesoy emphasized the overwhelming Russian influence in the region that both curtailed Turkish and Iranian expansion and curbed the potential economic benefits for both countries.

We are at a point where Tehran and Ankara could institutionalize their cooperation, particularly in Syria. Yet crucial areas of vulnerability in their bilateral relations remain. Both countries fear the other will become stronger rather than exploring win-win opportunities. Unless they can put aside the deep-rooted rivalry and mutual mistrust, long-term cooperation cannot be sustained.