Allegations of Iranian support for the Kurdistan Workers Party (PKK) have created fresh tension in the region as Turkey faces new violence from Kurdish militants. 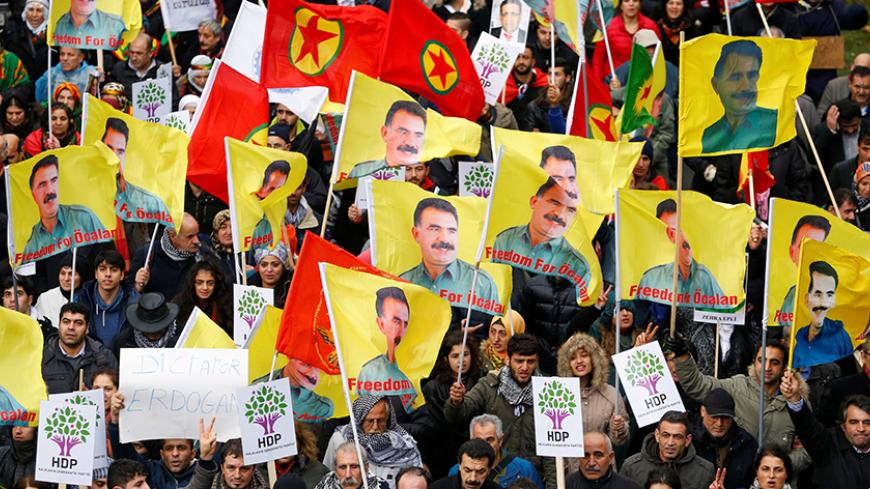 A few weeks before the devastating Dec. 10 twin bombings in Istanbul — for which Kurdish militants claimed responsibility — Al-Monitor spoke with several sources well-connected with Ankara about how Turkey might address Iran's intensified logistics support to the Kurdistan Workers Party (PKK).

For the past couple of months, different media outlets in Turkey and the region have been reporting that representatives of Iran’s Islamic Revolutionary Guard Corps, led by Gen. Qasem Soleimani, have held several meetings with senior PKK members in Baghdad and in Halabja and Rania in Iraqi Kurdistan. The Kurdistan Freedom Falcons (TAK), a PKK offshoot, claimed responsibility for the attacks that killed 38 people and wounded 155.

Long gone are the days when Turkey and Iran cooperated against Kurdish guerrillas. Though today Kurdish groups make headlines about their internal divisions and feuds, they are still able to influence the behavior and decisions of both Iran and Turkey. Whether the two countries manage to keep their proxy war over northern Syria and Iraq contained or whether it could lead to direct confrontation between them remains to be seen. For now, Ankara has to face the immediate consequences of its ill-conceived policies in Syria and Iraq.

Turkey’s battle against the Kurdish People’s Protection Units (YPG) and the PKK has indeed changed the balance in the region. The PKK has become a crucial combat force (for organizing, as well as training units) for several groups in northern Syria and Iraq that have been trying to survive against the Islamic State (IS) and its offshoots. Indeed, the former Yazidi capital of Sinjar, Iraq, has become the new headquarters for the PKK, despite several statements from Turkish President Recep Tayyip Erdogan that he would not allow it. The PKK’s overall influence in Iraq has expanded significantly over the past couple of years.

Turks believe this would not have happened without Iranian approval. Pro-Justice and Development Party (AKP) news media claim Iran is now hosting three PKK camps in its territory and providing arms to Kurds through its proxy armed organizations such as Iraq's Popular Mobilization Units. Sources in Ankara have informed Al-Monitor that they suspect Iranian-made fertilizers and other dual-use materials are used in PKK bombs as well. After years of allegations that Turkey was enabling the flow of bomb-making fertilizers into IS territory, and after experiencing consecutive attacks on its own soil in June, Turkey banned the sale of ammonium nitrate-based fertilizers. However, news of bombs and explosive devices coming from eastern and southeastern parts of the country has become routine.

The roots of the problems go deeper than possible Iranian logistical support for the PKK or other Kurdish groups. It is instead the Iranian-Turkish tug of war over the Kurds.

For years, Turkey had a stable, profitable friendship with the Kurdistan Regional Government (KRG) in northern Iraq. Now Ankara is pressuring the KRG to take its side against the Iraqi government. The latest announcements from Syrian President Bashar al-Assad that the Kurdish federal zone in Syria is viewed as only temporary generated enthusiasm in Ankara, another indication of how Ankara is desperately seeking allies against the PKK and YPG. However, at least for the foreseeable future, that seems like a slim possibility. We can explain this by analyzing Iranian interests.

Iran has always had an intriguing relationship with the Kurds, while engaging in ongoing attacks against the Party for a Free Life in Kurdistan (PJAK) in Iran.

Yet before 2003, all Kurdish political parties had headquarters in Tehran, and the first planes to land in Erbil after the IS attack were Iranian transports, according to David Phillips, director of the Program on Peace-Building and Rights at Columbia University’s Institute for the Study of Human Rights.

Aykan Erdemir, a former member of the Turkish parliament who is now a senior fellow at the Foundation for Defense of Democracies, told Al-Monitor, “In Syria, Tehran is skeptical about the PKK-affiliated PYD’s [Kurdish nationalist Democratic Union Party] attempts to carve a contiguous Kurdish-controlled territory, worrying that this entity could then provide a base for Western powers. In Iraq, Tehran sees the PKK as an asset in counterbalancing Turkish military presence in Bashiqa. As the tension between Ankara and Tehran over the future of Tal Afar climbs, both Iran and Iraqi Popular Mobilization Units seem to be more willing to enter into tactical alliance with the PKK.”

Others are more dubious about long-lasting PKK-Iran cooperation. Safak Bas, a doctoral candidate at Free University of Berlin and an associate fellow at CARPO-Bonn (Center for Applied Research in Partnership with the Orient), has some reservations about the extent of support Iran provides. He told Al-Monitor, “Supporting an organization that is being listed as a terrorist organization in order to destabilize a neighboring country is not a strategy Tehran pursues. Especially when looking at the various areas of cooperation Iran has with Turkey, antagonizing Ankara would complicate things for Tehran in the region.”

Yet given the reality on the ground, that idea is not that far-fetched. Given the IS threat, the forces in the region could have prevented further loss of civilian life and turmoil if they had cooperated. But the established states failed to end the Syrian civil war and to resist IS in unison, so the PKK and other Kurdish factions emerged as the sole credible secular force. In a recent documentary, Bese Hozat, co-chair of the Kurdistan Communities Union, an umbrella organization of the PKK, said, “We are not just defending Kurdish freedom. We have outgrown that mission. We are defending all groups in the region.” So far, Erdogan's AKP government has not only been determined to “exterminate the PKK,” but also to replace the Kurdish civilian population with Sunni Arabs in its own territory and in northern Syria.

Much to the chagrin of the Iranian government, the AKP’s support for Saudi- and Qatari-backed Islamists in Iraq and Syria has continued over the years. Now, Iran calculates it is in its best interest to cooperate with the PKK and the YPG to help end the IS threat. In addition, both Russia and the United States may extend their support of Kurds in the coming months; hence, the time is ripe to be on better working relations with the Kurds.

Also, for Iran to sustain a safe route to the Mediterranean, ideally connecting Tehran to the Syrian port city of Latakia, the Kurds' cooperation is essential. Major towns such as Kobani and Qamishli in northern Syria and Sinjar in Iraq are crucial connecting points on this projected Iranian corridor. Even if the Turkish government manages to militarily dominate these Kurdish towns, it will not be able to establish sustainable communities and governance. Calculating this, it is rational for Iran to provide for a stable Kurdish presence.

A few senior bureaucrats in Ankara foresee this grim future. One told Al-Monitor, “We asked Iranians about their relations with the PKK and did not receive a straight answer, but we see how their interests align. For decades, Father Assad [Bashar al-Assad's father, Hafez al-Assad] held PKK’s hand. It has again become our weakest point. However, Turkey still has options.”

That is true, but with growing domestic economic and security vulnerabilities, its options in both the domestic and international arenas are decreasing in number and becoming much less pleasant. Worst of all, the Turkish grand strategy for Syria is still obscure, except for “exterminate the PKK,” and for the past four decades, military solutions alone have not been sufficient to accomplish that. Kurdish cooperation with Iran also signifies how little hope Kurds hold for any sort of functioning peace plan with AKP.

For now, there are mainly two arguments in the Kurdish press. One states that Kurds are becoming the collateral damage in the cold war between Turks and Iranians; the other argues that Kurds can influence the plans and actions of both Iranians and Turks, and they can indeed gain self-determination. The latter option could generate winning results for all parties. But unless Turks alter their game plan soon, only Iran and the Kurds will win.