Five reasons 2014 could be tough year for Erdogan

While 2013 was an annus horribilis for Erdogan and his Justice and Development Party (AKP), 2014 could be worse. 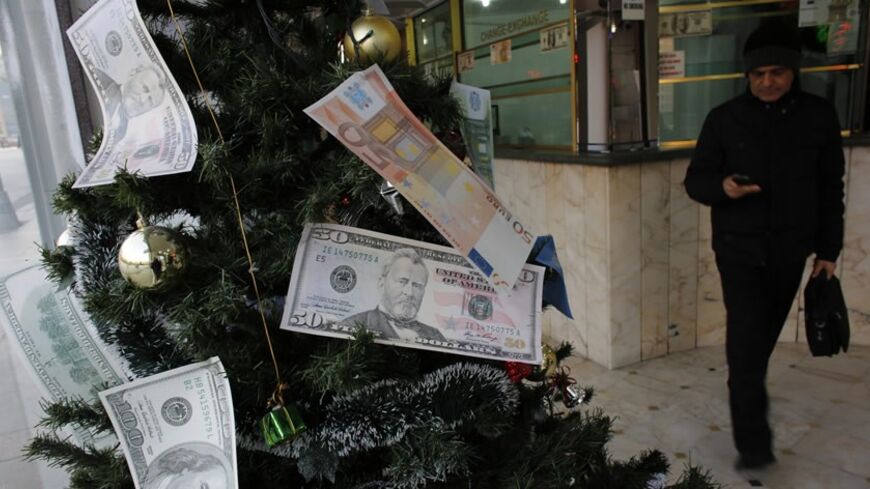 A man checks currency rates at a currency exchange office decorated with a Christmas tree and fake dollar and euro banknotes on it, in central Istanbul, Jan. 2, 2014. - REUTERS/Murad Sezer

Last year was an annus horribilis for Turkey’s Prime Minister Recep Tayyip Erdogan and his Justice and Development Party (AKP). Nothing went right for the ruling party.

There is no reason to think that 2014 will be any better. To the contrary, a worse year may be in the offing for Erdogan and his party. The parameters that will determine the state of affairs in 2014 acquired their final forms in 2013. Just to recap:

Erdogan, who expedited Islamic social engineering with his oppressive actions, was personally responsible for the Gezi Park protests in June 2013, with his ill-judged decisions and reactions. The wave of protests that turned into a popular explosion spread through the entire country in a short time. According to police figures, about 3.5 million people came out into the streets to protest in 80 provinces.

Gezi Park resistance, while marking the birth of a democratic, libertarian and new civil society opposition, also exposed the oppressive nature of the government for the entire world to see.

In addition to Erdogan’s use of excessive force against protesters, his irrational reactions — for instance, claiming that the protests were organized by the "interest lobby” — caused a dramatic global blow to his and his party’s image and moral authority.

The power struggle between Erdogan and the AKP and his former power partner the Gulen movement came out into the open in 2013, when it began to levy heavy costs on both parties.

So far, the worst damage has been to Erdogan and the AKP. The prosecutors who on Dec. 17 launched investigations into corruption, bribery and money-laundering against members of the AKP and Erdogan's close circles resulted in four ministers of the Erdogan government relinquishing their cabinet seats. The AKP government blocked the second wave of investigations that were aimed at Erdogan’s son, businessmen close to him and key bureaucrats by blatantly intervening with the judiciary. The word “AK” in the registered abbreviation of the “AK Party” stands in Turkish for Adalet ve Kalkinma Partisi [Justice and Development Party], meaning “pure and untarnished.” Hence, the rejection of the abbreviation "AKP" and insistence on "AK Party." The AKP has entered 2014 devoid of “purity and cleanliness” that "AK" is supposed to signify.

The year 2013 got into the record books as the year the AKP’s sectarian, Islamic and pro-Ottoman Syria policy collapsed beyond dispute.

In this generally depressing state of affairs the least difficult was the Kurdish question. “The peace and solution process” has stalled and, more than a process, it has become a “status of non-hostility.” Maintaining this non-hostility status in 2013 was possibly the only consolation for Erdogan. But such a non-hostility status is conjectural and vulnerable to provocations.

Erdogan’s ill-judged reactions, particularly to the Gezi protests and subsequently to the corruption investigation, have added to the pressures piling up and have affected the financial markets and fragile economy.

All these negative factors have interacted to form a formidable vector.

Turkey has never been so isolated in the post-Cold War era as it was in 2013. Erdogan entered 2014 as a leader who had never been so alone. Alliances that had a major part in the successes of Erdogan's initial years of rule are no longer there. Paradigms of Erdogan and his party crumbled one after another in 2013. His renowned fortunes reversed in 2013, and the AKP has been sliding down from the zenith. This year is likely to be the toughest year for Erdogan and AKP rule. Worse, 2014 is an election year in Turkey. Local elections will take place at the end of March and presidential elections in August. The government may well opt for early general elections depending on the outcome of the local elections. These elections are bound to make life more difficult for the ruling powers. All the reasons cited above are the constraints Erdogan and his party will have to cope with. Erdogan had succeeded in overcoming the constraints of his struggle with the military by making use of the elections. But this time around he will not be able to overcome the new constraints facing him, no matter what the election results may be.

The parameters of 2014 tell us what will not be happening. Here are five factors that will make 2014 a more difficult and worse year than 2013:

The AKP versus Cemaat [Gulen movement]:  In the struggle that exhibits features of civil war within the state, the worst losers so far have been the prime minister and his party. But Erdogan and his close quarters are preparing to retaliate and appear to be mobilized in a comprehensive way to eliminate the Cemaat’s state power. This struggle will inevitably escalate in 2014. Both sides are delivering serious body blows to each other’s legitimacy. Gulenists are likely to share with the judiciary and the public the information they have amassed on corruption and other AKP government misdeeds. The government, in addition to initiating legal action against the Cemaat on grounds of illegally organizing within the state, may also target the financial resources of the movement. An all-out war seems to be likely. Of course the worst damage this will inflict will be on state institutions and functioning democracy.

Economy:  First the Gezi Park phenomenon, then the AKP-Cemaat strife and the internal instability resulting from the damages this strife has inflicted on relevant institutions have made Turkey an unpredictable country. This negative factor when combined with a global financial conjuncture may well discourage money from coming to Turkey. Having problems finding credit, the negative repercussions will press harder on Turkey’s economic growth, which is based on financing the current deficit. The possibility that recent heavy losses of Turkish currency against the dollar and euro could become a trend has caused major concerns in financial markets.

Elections:  The AKP-Cemaat struggle will definitely lose the AKP votes. Even more important, the corruption scandal that so far has resulted in departures of four ministers who were all considered close to Erdogan has now become a part of the AKP image. Erdogan has no choice but to enter the local elections laden with corruption charges. Unfavorable indications in the economy must also be considered.

Another factor to keep in mind is the main opposition Republican People's Party (CHP) fielding candidates who could seriously challenge the AKP candidates in Ankara and Istanbul in the forthcoming local elections. For the government to lose a significant number of votes in the local elections is becoming a possibility. The AKP could come out of the local elections as a downsized party. This in turn will affect the calculations made for the presidential elections.

Foreign policy and foreign relations:  Last year was the year of bankruptcy and exhaustion of the AKP foreign policy. What Ankara has to do is save itself from the regional and global isolation it has dragged itself into, to redesign — that is, to reformat — its foreign policy on secularism, strong institutions and predictability. But the current foreign policymakers who caused this serious deficit of confidence and trustworthiness in Western and Middle Eastern capitals can't do this, even if they wanted to. As such, the Erdogan-[Foreign Minister Ahmet] Davutoglu duo will try to make do by diluting the negative consequences of their dead end policies. In 2014, Erdogan will not have the support he had from the West to stay in power and further strengthen his hold.

Syrian crisis:  Syria has become the black hole of Turkey. The best contribution Turkey can make for a resolution to the 2014 crisis will be to refrain from damaging the political transition process. Ankara will continue to pay in 2014 for its Islamist, pro-Sunni and pro-Ottoman Syria policy by facing terrorism, sociopolitical polarization, domestic instability and massive economic costs.

Ankara will be confronted by a serious moral and diplomatic challenge brought about by its nightmare of “transition with [Syrian President Bashar al-] Assad” reality and threats of al-Qaeda-affiliated organizations it had a part in forming and sustaining.

To slow down his downslide when faced with this negative mix of five elements, Erdogan will be needing good luck more than ever.