On the anniversary of Egypt's Day of Rage, an Egyptian woman is subjected to the same police brutality her fellow citizens revolted against three years ago. 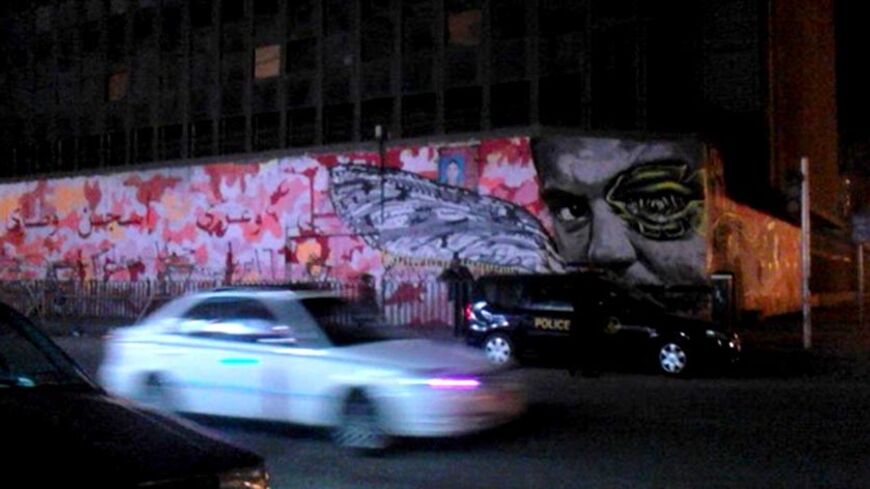 Alaa Saad said she was taking this photograph of graffiti on Mohamed Mahmoud Street near Cairo's Tahrir Square when she was confronted by police, Jan. 28, 2014. - Alaa Saad

Alaa Saad left work at Shorouk News on the evening of Jan. 28 and walked to Tahrir Square. After arriving at the square, she walked to nearby Mohamed Mahmoud Street and took out her mobile phone to take a few photos of some graffiti. Such drawings fill the walls along the street and are a testament to the numerous events that Egypt has witnessed since the January 25 Revolution.

She said she had only taken one photo when she noticed someone forcefully pulling her shirt from behind, asking her, "What are you doing here?" When she turned around, she saw a woman dressed in a police uniform. She was a member of the women's police, and she grabbed at Alaa's mobile phone, trying to take it from her. She then grabbed Alaa herself and tried to pull her into a police car parked nearby.

Alaa refused to get into the car, at which point, the policewoman began hitting her and pulling on her hijab, which came off. The woman then began pulling her hair. Alaa screamed, "I haven't done anything!"

Alaa told Al-Monitor that a number of policemen were standing nearby, but none of them lifted a finger or tried to break up the skirmish. According to her account, they were laughing and even prevented a passerby from trying to help.

Things did not end there, however, as a number of "honest citizens," as she called them, gathered and joined in beating her. An old lady repeatedly hit Alaa with a cane, while a man carrying photographs of Gen. Abdel Fattah al-Sisi began cursing her. Another man started touching and sexually harassing her. She could do nothing but scream as the policemen continued to watch and laugh.

Alaa said that she forcefully resisted until she was able to escape from the crowd and flee to a side street near Mohamed Mahmoud Street. She put her hijab back on and flagged down a taxi, which she took to Halal Hospital, near Tahrir Square. At the hospital she received treatment for the wounds she had sustained to her face and body. 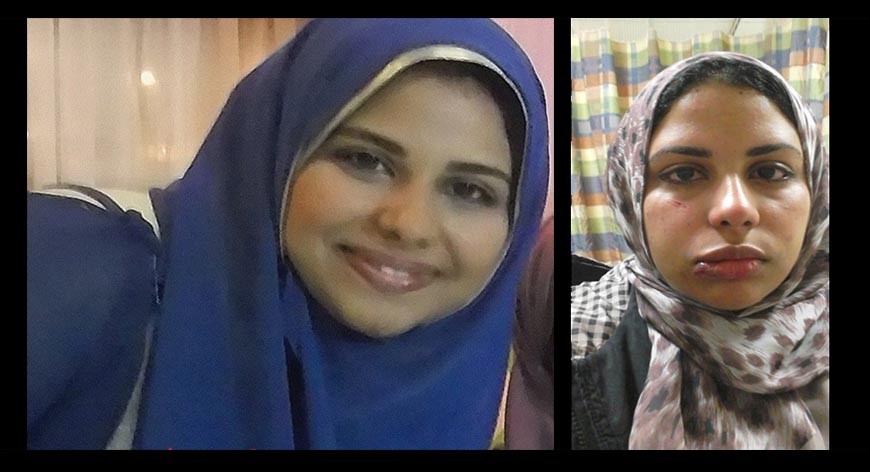 Alaa Saad before confrontations and after. Photo: Alaa Saad

Alaa was not trying to take photos of graffiti so she could write an article about it. Rather, she went to Tahrir Square to reminisce about the days of the January 25 Revolution on the anniversary of the 2011 "Day of Rage," when Egyptians revolted against police injustice. After taking some photos, she had planned to stroll the same streets that witnessed the events of the revolution. Instead, she was met with violence from the police and citizens themselves, without knowing what she had done that was so wrong. She now says, "I just want to get out of this country. It is no longer for me."

Saad refused to file a report at the police station since she felt it would be of no use. She said hundreds of youth have been killed at the hands of the police and there has been no justice served for them, so she didn't expect it to be any different for her.

The Interior Ministry's response to the incident came through its spokesman, Maj. Gen. Hani Abdel-Latif, who denied any knowledge of the incident. He told Al-Monitor: "She should have filed a report at the nearest police station to prove the incident occurred and so that we could deal with the [alleged] attackers."

Abdel-Latif also denied that there were any female police in Tahrir Square on that day. "Many Egyptians were in the square celebrating the anniversary of the [January 25] Revolution, so how could [the accused] attack a girl who did nothing?" he added.

On the other hand, Azza Kamel, the director of the Appropriate Communications Techniques for Development Center (ACT), told Al-Monitor that the sexual assault Saad was exposed was not the first, nor will be the last, in the series of attacks against women in Egypt. She noted that conditions in the country are not to blame for the disrespect women face in Egypt, since such incidents began many years ago.

Kamel confirmed that the incident involving Saad was the first time she had heard about a female police officer assaulting a woman. She said that all of the reports she has received have involved women being sexually assaulted or attacked by normal citizens.