Arab-Israelis have constructed lives coexisting with their Jewish neighbors, only to find that some Israeli politicians would like to swap them in a future agreement with the Palestinians. 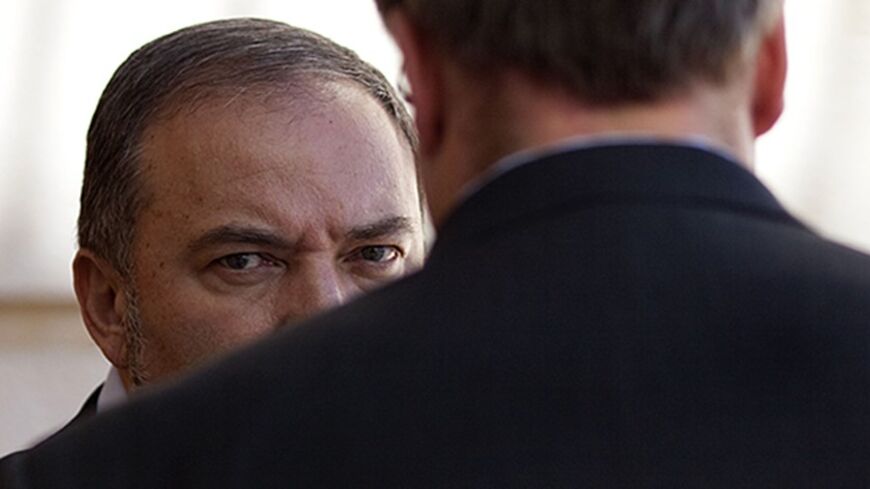 The public embrace by Foreign Minister Avigdor Liberman of his American colleague Secretary of State John Kerry convinced quite a number of observers that we were seeing a “new Liberman.” His reservations about the scornful statements by Defense Minister Moshe Ya'alon hurled at Kerry reinforced Liberman's image as the “responsible adult,” as President Shimon Peres referred to him at the annual conference of Israeli ambassadors Jan. 5. My colleague Ben Caspit also wrote that Liberman, always spoiling for a fight and setting fires, had taken a more pragmatic view.

At that same conference of ambassadors, Liberman declared that his party would not support a comprehensive arrangement with the Palestinians unless it included an exchange of populations. The foreign minister declared that he insists that Jewish settlers only be evacuated from the occupied territories (reminder: Israel never annexed the West Bank) on the condition that the Wadi Ara and Triangle regions be transferred to Palestine. This means revoking the citizenship of some 200,000 Israeli Arab citizens, whose legal status is identical to that of their Jewish neighbors in the adjacent Jewish localities of Kochav Yair and Katzir.

Three days after he praised Liberman’s maturity regarding the diplomatic process, Peres expressed reservations about the foreign minister’s plan to get rid of Israel’s Arab citizens. The plan is the condition for the “responsible adult” agreeing to turn the “process” into a peace agreement. During a speech at the Israeli Technology Institute on Jan. 8, Peres said, “We have no right to uproot a citizen from his place because he’s an Arab. The Arab citizens, in my view, are like all citizens, with the same rights.”

Even Interior Minister Gideon Saar of the Likud Party, who has been far from exemplary in displaying compassion toward non-Jewish African asylum seekers, spoke out against the suggestion of stripping Arab citizens of their citizenship. Saar took advantage of a Jan. 7 visit to the Arab city of Sakhnin to declare, “An Israeli citizen is not an object and cannot be transferred within the framework of a diplomatic arrangement.”

Liberman does not care about political correctness. He makes a living stirring up sentiments against the left wing and has made a career out of setting fires in the Arab sector. In presenting his old-new plan to transfer Wadi Ara and the Triangle to Palestine, the foreign minister stressed that he knows the idea is not “politically correct.” In fact, it's hard to imagine an elected official in a democratic state demanding the expulsion of citizens just because they are not of the same ethnicity and religion as the majority.

True, Liberman isn’t suggesting that the Arabs of Wadi Ara be expelled from their homes and villages. He “simply” demands that they be transferred from the developed country where most of them were born and educated to a developing country (in the most optimistic case), which will have to deal with all the difficulties of moving from a condition of abusive occupation to a democracy and economic independence. Many among the said population contribute to Israel’s development and success and support a two-state solution in which the Arab residents of Israel will remain Israeli citizens. Unlike the settlers — who will be forced to move their homes to their country's territory, where most of them work or study — Israel’s Arabs consigned to Palestinian sovereignty would be severed from the fabric of the existence they have known for decades.

Liberman’s plan is not only lacking in ethics and political correctness. It also runs contrary to Israel's declaration of independence, the founding document of the Zionist vision, which promises that the State of Israel will “ensure complete equality of social and political rights to all its inhabitants irrespective of religion, race or sex.” And there's more. Revoking the citizenship of tens of thousands of people simply because they are Arabs living near a border and moving them to another sovereign country against their will are illegal acts according to both Israeli and international law.

In addition to these issues, Liberman's plan has no demographic or strategic value. The relevant localities have 116,000 to 148,000 residents, who constitute no more than 9% of Israel’s Arab population, or 1.8% of the entire population. Demographic forecasts indicate that even without moving the residents of Wadi Ara and the Triangle to Palestinian sovereignty, in 2050 Israel will have a Jewish majority of 74%. However, with the passage of the new “governance law,” which proposes raising the election threshold to 3.25%, eliminating tens of thousands of Arab voters from the rolls will be sufficient to tilt the scales in favor of the right-wing bloc.

Liberman’s proposal to hand the Wadi Ara strip and the Triangle to the Palestinians, whose reliability he (perhaps more than anyone else) greatly doubts, shrinks Israel’s waist at its narrowest point and brings the country’s narrow coastal strip closer to the state’s eastern border. How does moving the border to the west correlate with the Israeli claim that its narrow waist makes it essential to deploy the Israel Defense Forces in the Jordan Valley?

A poll conducted by the firm Dialog and published Jan. 9 in Haaretz indicates that if Liberman’s population exchange plan takes shape, it will be met with sweeping rejection by the Arab sector. According to the poll, 65% of Israeli Arabs object to having their communities moved to a Palestinian state. Only 34% of Wadi Ara residents support such an option. This means that implementation of the plan will entail the forced exile of people to the border region of a neighboring state. It's safe to assume that such a move will not turn the Palestinian town of Umm al-Fahm in Israel into a town of Israel lovers.

It's too soon to assess the prospects of the negotiations being orchestrated by Kerry and the chances that Liberman’s condition will be put to the test. (It’s strange that the Obama administration has not objected to his plan.) Nonetheless, the damage is already done. The very debate about revoking Israeli Arabs' citizenship casts doubt among them about their standing and plays into the hands of nationalist leaders and religious zealots, who preach against coexistence with their Jewish neighbors.

What goes through the mind of a young Arab student sitting next to his or her Jewish friends, listening to talk on the radio about their foreign minister’s plan? How does an Israeli writer like Sayed Kashua feel, having built his life and identity on the belief that there’s a future with the Jewish and Arab publics together? This is how the “new Liberman,” who waves the flag of “no loyalty, no citizenship,” wishes to nurture the loyalty of 1.68 million people to their state — a state that views them as a “demographic problem” and wants them to get out of its face?