The public debate on the peace process between Prime Minister Benjamin Netanyahu and former Shin Bet Director Yuval Diskin has sharpened a bitter point: The “implications of failing to solve the Israeli-Palestinian conflict are far more existential than the Iranian nuclear issue.” 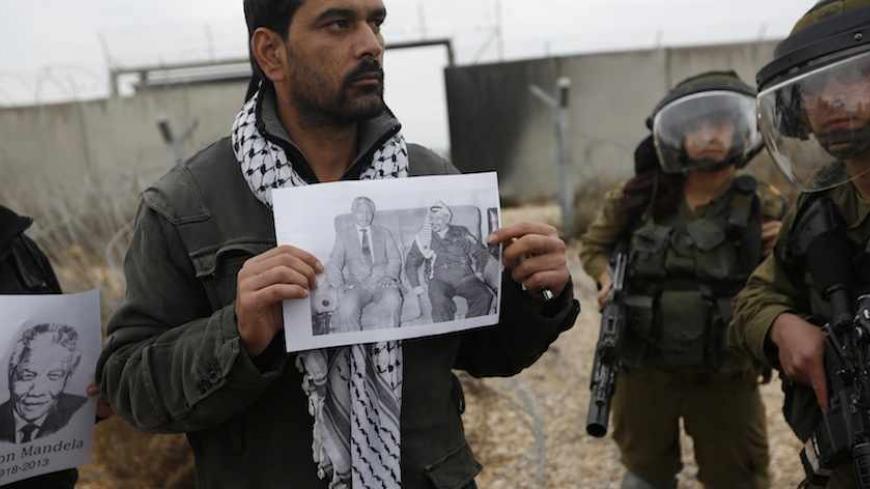 An unbridled public debate erupted this week on Dec. 4 in Israel between two main approaches dividing the Israeli public in connection with the peace process, diplomatic isolation and the Jewish state’s other geostrategic struggles.

Characteristically standing on the right side of the spectrum is Israeli Prime Minister Benjamin Netanyahu. On the left side, with another surprising and brave foray, is former Shin Bet Director Yuval Diskin. The two exchanged public verbal blows that slid into charged mud-slinging. That aside, this long-standing fundamental dispute has rived Israelis for a very long time.

Diskin delivered a talk on the occasion of the 10th anniversary of the Geneva Initiative that saw the participation of some 600 people in Tel Aviv. The following is the thrust of what he said: It is time to prefer the sanctity of the people to the sanctity of the land, making Israel a home that does not require occupying another people. Israel must freeze the settlements. The number of settlers in the West Bank has reached such levels that no government will be able to evict them.

Diskin also called on making goodwill gestures vis-a-vis the Palestinians. In his opinion, the most important gesture is to totally freeze construction in the settlements. The second is to release prisoners. According to him, there should be no release of prisoners in the setting of the "cynical and revolting deal, which sought a priori to avoid freezing the settlements, which is what the government did."

Diskin’s climatic point was his unequivocal assertion that the “implications of failing to solve the Israeli-Palestinian conflict are far more existential than the Iranian nuclear issue.”

In making that assertion, Diskin violated the sanctum sanctorum of Netanyahu, who was his immediate commander during his stint as Shin Bet director. After all, Netanyahu has forsaken all other agendas in order to deal exclusively with the Iranian issue, which he sees as the key for the continuing existence of the Jewish people on its land.

Diskin nimbly booted out this concept. This might very well be, he said, the last chance to reach the two-state solution. The Geneva Initiative laid the right foundations for an agreement. We cannot live in one state between the Mediterranean Sea and the Jordan River nor can we treat the conflict as shrapnel in the backside, as one of our new ministers put it. “The question remains who the backside is and who the shrapnel is,” he said.

Diskin was alluding to the controversial statement by Israeli Economy and Trade Minister Naftali Bennett who compared the Israeli-Palestinian conflict to old shrapnel that has been lodged in Israel’s backside for many years and is merely an annoyance. But it was not with Bennett that a world war broke out following those statements, but with Netanyahu. The prime minister’s office quickly issued a strongly-worded condemnation, accusing Diskin of geopolitical and historical shortsightedness and of imperiling Israel’s future. But above all, it accused him of seeking vengeance. Diskin's statements against Netanyahu, the prime minister’s associates contended, emanated from personal frustration since he wanted to be named Mossad director (after retiring from the Shin Bet) but Netanyahu opted to appoint Tamir Pardo in his stead.

The problem with this version is that it has nothing whatsoever to do with reality. Diskin completed a full five-year tour in the Shin Bet, at the end of which Netanyahu requested that he extend it by one more year. Diskin consented. When the time was up, Netanyahu asked him whether he would like to replace Meir Dagan as Mossad director. Diskin asked for time to think about it. By the time he came back with a positive answer, Netanyahu had already appointed Tamir Pardo.

Diskin wasn’t angry; on the contrary, he was relieved. He had been serving Israel for 36 years. He was the director of the Shin Bet — a much larger and more powerful organization than the Mossad. He wanted to go home. So Netanyahu’s office tried besmirching him by accusing him of immaterial motives. Those who know Diskin, his moral stature and personal values, know that these are false accusations. Normally a quiet and composed person, Diskin went livid, reacting on his Facebook page. He took off his gloves and charged at Netanyahu while recalling the most recent scandal that the Netanyahus were involved in, namely the report about the cost of maintaining their private home in Caesarea that unveiled a Caesar-like spendthrift and avaricious life style. Israelis were foaming at the mouth, and not for the first time. So at this point Diskin shows up with this story, which already started waning, and rekindles it. It seems to me that Netanyahu lost to Diskin in this round.

It now remains to be seen from a historical perspective who will win the next round. This is because the majority of Israelis hold the same view as Netanyahu: That is to say there is no chance of reaching an arrangement with the Palestinians, and it’s all a waste of time and energy. The skepticism, the addiction to the status quo, the reasonable sense of security, the fairly good economic situation and the fact that the Palestinians are divided between the Gaza Strip and Judea and Samaria and continually demonstrate intransigence — all these have shattered the Israeli peace camp. The latter does not want to hear of the Palestinians, preferring de facto to rule them while de jure ignoring it.

Diskin’s remarks were a wake-up call, and not for the first time. However, chances are slim at this stage that this will elicit a joyous outburst of applause from a large number of Israelis.

This week, the world bid farewell to Nobel Peace Prize laureate Nelson Mandela. This is a man who knew what the truth was and would not steer clear from it. He kept his spirit and image despite serving dozens of years in prison during the Apartheid regime. He did not use force and was opposed to violence until he prevailed. It is such a shame that in this conflict between the Israelis and the Palestinians, there isn’t such a Mandela. There is no responsible, charismatic, powerful adult who understands the goal, who can chart the map, who is willing to make tough decisions but also make painful concessions to lead his people toward that goal.

There isn’t a Mandela on the Palestinian or Israeli side. All that remains is a dispute which occasionally turns into an ugly quarrel raging over the ruins of a dream amid the smoldering flame of peace.