From the “Dear Abby” sheikh to the more conservative, a wide range of Saudi clerics now have millions of Twitter followers. 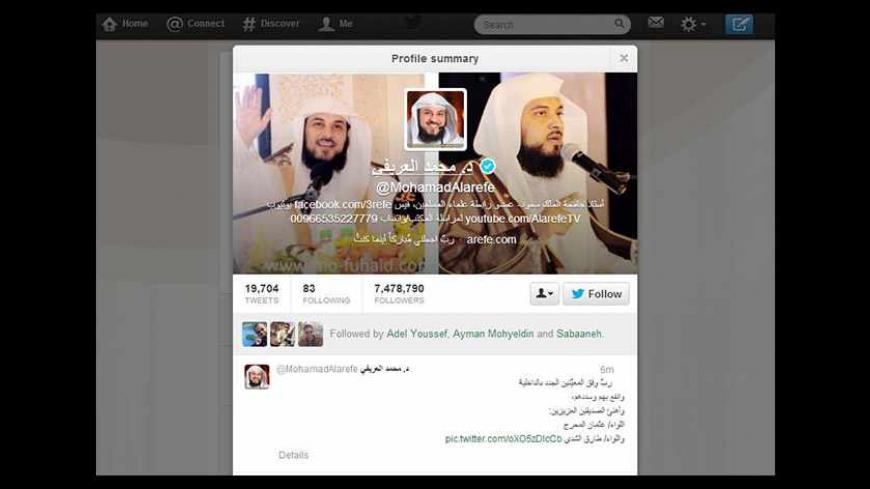 In Saudi Arabia, the ultraconservative birthplace of Islam, Twitter is the clergy’s favorite new tool to propagate the 14-century-old faith. Saudi cleric Mohammad al-Arifi has the most popular Twitter account based in the Middle East, and one of the top 120 Twitter accounts worldwide. He has more than 7 million followers, with an average of 8,000 more signing up every day — on a par with pop stars such as Jessica Simpson and 50 Cent.

He’s not unique, either. From the “Dear Abby” sheikh to the self-proclaimed “Elvis” televangelist to the more conservative, a wide range of Saudi clerics now have millions of Twitter followers.

Although Twitter is booming in Saudi Arabia, the Sunni kingdom has a complicated relationship with social media. Some 41% of Saudi Internet users were on Twitter by November, according to Business Insider. Even members of the royal family have embraced it. In 2011, Prince Al-Waleed bin Talal invested $300 million in Twitter. The office of Crown Prince Salman bin Abdul Aziz opened an account in February 2013 that had some 600,000 followers within nine months. And several clerics use Twitter to extol the virtues of the ruling family’s faith.

Yet, top sheikhs, including the kingdom’s highest religious authority, have denounced Twitter. In March, Grand Mufti Sheikh Abdul Aziz al-Sheikh called Twitter a “council of clowns” for “unjust, incorrect and wrong” messages. The government reportedly monitors Twitter for language insulting Islam or challenging the monarchy. Culture Minister Abdel Aziz Khoga has admonished Saudi citizens to “take care in what they are writing on Twitter.”

Mohammad al-Arifi may be the most popular and the most controversial Twitter sheikh. In May, Switzerland banned him from entry for five years, citing anti-Semitic statements. On television and Twitter, he has advocated the subjugation of women. In a 2007 show, Arifi approved the practice of lightly beating a wife if she does not obey a husband’s admonitions. In 2012, he tweeted opposition to giving women jobs outside the home.

He has even used Twitter to censure a female pop star. In June, he urged Emirati singer Ahlam to abandon her career and become a preacher ahead of Ramadan. Ahlam politely declined in a tweet thanking the sheikh for his concern.

Arifi boldly takes on Middle East politics, too, often with strong sectarian blasts at rival Shiites. In 2012, he called for jihad against the Syrian regime, which is dominated by the Alawite sect linked to Shiism. “I swear to Allah Almighty that if I could do something [in Syria], I would give my life,” he tweeted. In 2013, Arifi reportedly described Shiites as “nonbelievers who must be killed” at a conference supporting the Syrian opposition. He has often condemned Shiite Iran and Lebanon’s Shiite Hezbollah militia for defending the Bashar al-Assad regime.

In October 2012, Arifi unleashed a series of tweets that questioned Kuwait’s opposition to peaceful demonstrations and even claimed Sheikh Sabah al-Sabah was an “unqualified ruler.” Arifi later appeared to change his tone after facing a backlash from Kuwait bloggers and Twitter users. “Let bygones be bygones,” he tweeted.

Born in 1970, Arifi is now one of the world’s most influential Muslims, according to The Muslim 500, despite being younger than most top clerics. But he has ruffled the feathers of fellow sheikhs. In 2013, Arifi was sued by Issa al-Gaith, a member of the Saudi advisory Shura Council. Gaith charged that Arifi retweeted an allegedly libelous poem and demanded damages of 3.5 million riyals ($930,000) and Arifi’s imprisonment for six years.

Once Osama bin Laden's idol, Salman al-Oudah now tweets almost fanatically against extremism. “Terrorism is the greatest servant of tyranny, because it rallies the oppressed to the oppressor, and allows their subordination,” he tweeted in October.

Oudah is also outspoken in his 140-character criticisms against autocratic and military regimes. “The Arab Spring exposed the will of the people, while the counter-revolution exposed the reality of the security forces,” Oudah tweeted in August. He also warned that cracking down on Islamists pushes them toward extremism.

Oudah has even dared to take on the Saudi royal family. In a series of tweets, his open letter to the king in March called for the release of political prisoners and warned of growing dangers to the kingdom.

substandard healthcare and education, and dim prospects for political reform.

40. It is impossible to maintain the status quo. The real question is: Where are we headed?

Oudah even dared to challenge a government ban on his book, which supports peaceful activism. “This is not the time of banning, censorship and confiscation,” Oudah tweeted after the monarchy seized copies of his Questions of the Revolution at the 2012 Riyadh Book Fair. He countered by tweeting a link to the 208-page PDF.

Born in 1956, Oudah is one of Saudi Arabia’s most popular clerics and a top televangelist. With more than 3.9 million followers by December 2013, Oudah is widely admired as an independent thinker. But he has a controversial past. In 1990, he criticized the monarchy for allowing US and other Western troops into the birthplace of Islam to force Iraqi troops out of Kuwait. His angry fatwas won a following among militants, including bin Laden. In 1994, the kingdom imprisoned him for five years.

After his release, Oudah preached a different line. In 2007, he denounced bin Laden in an open letter on the anniversary of 9/11.

Ayed al-Qarnee is the “Dear Abby” of the Twitter sheikhs. He had more than 5 million followers by mid-December 2013 — second only to Arifi. Qarnee first gained fame for his self-help books such as Don’t Be Sad. Qarnee now tweets lighthearted advice. “Don’t delay a moment of happiness that is passing you by, embrace it and live it fully, for it may not return again,” he tweeted in November.

Born in 1959, Qarnee is one of the most prominent Islamic preachers in Saudi Arabia, according to The Muslim 500. He, too, has a controversial past. In 2011, Qarnee was reportedly fined 300,000 Saudi riyals (about $80,000) for plagiarism after copying chapters from a young Saudi female without crediting her.

On Twitter, Qarnee can be dismissive about women. “#Smile. Behind every great man is a woman, and behind every failure are two women,” he wrote in July.

Ahmed al-Shugairi is the rock star — and self-described “Elvis” — of Saudi televangelists. He had more than 4.9 million followers on Twitter by mid-December 2013. Shugairi mainly tweets themes from his television show “Khawater” (“Thoughts”), which has a large following among the young. Khawater tries to “spread the idea of charity and self-improvement in the Arab world at all levels,” Shugairi tweeted in July. His show propagates a more relaxed version of Islam than the kingdom’s rigid Wahhabism.

Born in 1973, he was a US-educated businessman and became a television preacher by accident when a friend invited him to host the pilot for a show called “Yalla Shabab” (“Come on Youth”). He was an instant sensation. Shugairi is not a formally trained cleric, but he is now “at the forefront of a religious revivalist movement affecting young people across the Middle East,” according to The Muslim 500.

Shugairi, however, disavows affiliation with any specific brand of Islam. “My only affiliation: Muslim,” he tweeted in July.

The opinions expressed in this commentary are solely those of the authors.