Salman Aloudah's son says it's ironic that Saudi Arabia is hailing the end of the Gulf rift but silencing a prominent voice who called on the neighbors to mend ties. 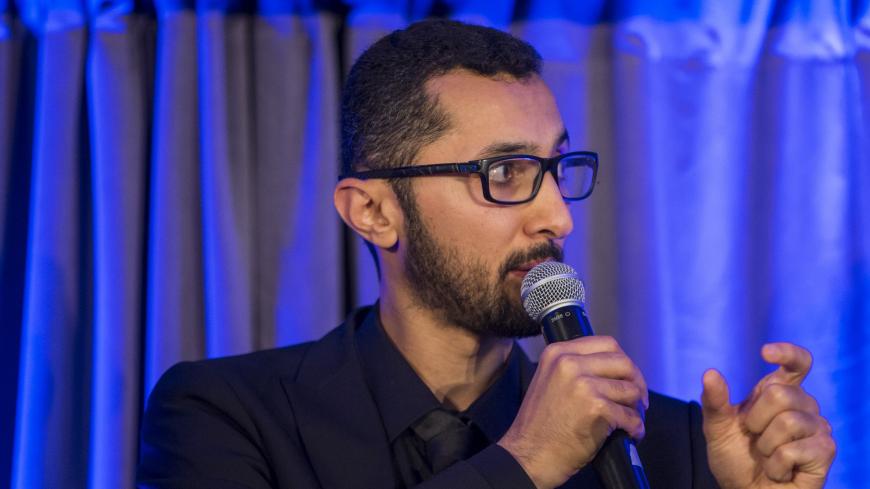 Scholar Abdullah Aloudh takes part in a panel discussion during a memorial service for Saudi journalist Jamal Khashoggi at the Mayflower Hotel on Nov. 2, 2018, in Washington, a month after Khashoggi was killed after entering the Saudi Consulate in Istanbul. - Zach Gibson/Getty Images)

As Saudi Arabia touts the diplomatic breakthrough that ended its three-year spat with neighboring Qatar, the kingdom continues to silence a prominent cleric who called for rapprochement.

Saudi Arabia, the United Arab Emirates, Bahrain and Egypt reached a landmark agreement this week to ease a rift dating to their June 2017 boycott of Doha. Saudi Crown Prince Mohammed bin Salman, who greeted Qatar’s ruling emir with a hug this week, praised the deal as one that will strengthen regional stability and security.

“My father’s call — that these two leaders get together for the best interest of their peoples — finally was answered,” said Saudi legal scholar Abdullah Aloudh. “But it’s so ironic that so many people who were caught up in this fight are still in prison."

His father, Salman Aloudah, a popular reformist preacher with a large social media following, is among them. “May Allah mend their hearts for the best of their peoples,” Aloudah wrote to his 14 million Twitter followers in September 2017. (The English spellings of the last names of Aloudah and his son vary slightly).

The next day, a team of state security officers showed up at Aloudah’s home in the capital of Riyadh, searched his belongings and arrested him.

He languished in prison for a year without charge or trial. Then in September 2018, the specialized Saudi court that handles terrorism cases announced 37 charges against Aloudah, which included “objecting to the boycott of Qatar,” “interfering in the affairs of a neighboring country” and “inciting public opinion against the ruler.”

Aloudah’s calls for reform in Saudi Arabia had earned him the distrust of the royal family. After gaining prominence as a conservative Salafi cleric endorsed by al-Qaeda’s Osama bin Laden (whom Aloudah would later publicly rebuke after 9/11), Aloudah spent nearly five years in prison for criticizing the Saudi government in the 1990s.

He later adopted a more moderate tone and became an advocate for the Arab Spring pro-democracy uprisings, which Riyadh viewed as a threat to its own stability. In a statement condemning his jailing, United Nations experts described Aloudah as a “reformist” who pushed for greater respect for human rights within Sharia.

The Saudi state prosecution is seeking the death penalty for Salman Aloudah, but his son fears “medical negligence” on the part of Saudi authorities may kill him first.

Salman Aloudah's health has worsened in detention, his family says, accusing prison guards of subjecting the 63-year-old to solitary confinement, sleep and food deprivation and other forms of torture in prison. During a rare prison visit, his children observed their father had lost significant weight and was having trouble with both his hearing and sight.

Riyadh has denied past media reports of prisoner abuse, and the Saudi Embassy in Washington did not return Al-Monitor’s request for comment on Salman Aloudah’s detention.

“The Saudi government is slowly killing my father,” said Abdullah Aloudh, a research director at Democracy for the Arab World Now, the human rights organization established by US-based journalist Jamal Khashoggi shortly before his 2018 murder.

“The same administration that killed Jamal Khashoggi extrajudicially has tried to kill my father in court,” he said.

Khashoggi’s murder at the hands of Saudi agents in Istanbul thrust Saudi Arabia’s human rights record and its treatment of dissidents into the international spotlight. Prince Mohammed has clamped down hard on even the most mild forms of dissent, instructing Saudi authorities to round up scores of government critics on charges human rights groups say are baseless.

“Saudi Arabia has a long history of creating convenient ‘boogeymen’ out of anyone who dares express sympathy with the victims of the government’s actions at home or abroad,” said Bethany Alhaidari, Saudi desk officer at Freedom Initiative, a Washington-based advocacy group.

“It has little to do with the content of those criticisms, most of which hold immense wisdom and truth,” said Alhaidari. “It has everything to do with the Saudi regime’s immature and reactionary policies.”

Those policies haven’t gone unnoticed by the incoming administration. On the campaign trail, President-elect Joe Biden pledged to “reassess” the US-Saudi relationship and said he would “insist on responsible Saudi actions and impose consequences for reckless ones.”

Rights defenders are hopeful Biden won’t turn a blind eye to Saudi Arabia’s rights clampdown, which in the case of Salman Aloudah has had repercussions for his family. The Saudi government has barred family members from leaving the country, and his brother was handed a five-year prison sentence after he tweeted about Salman Aloudah’s arrest.

Abdullah Aloudh, who is based in Washington, saw his passport frozen in what he believes was an effort to lure him back to the kingdom. The Saudi Embassy in Washington offered him a one-way ticket to Riyadh — an invitation he declined.