A new book by a veteran American journalist Caryle Murphy predicts that Saudi Arabia faces an “increasingly bumpy” two decades as its youth — who make up more than 60% of the population — demand jobs, economic justice and greater individual freedom. 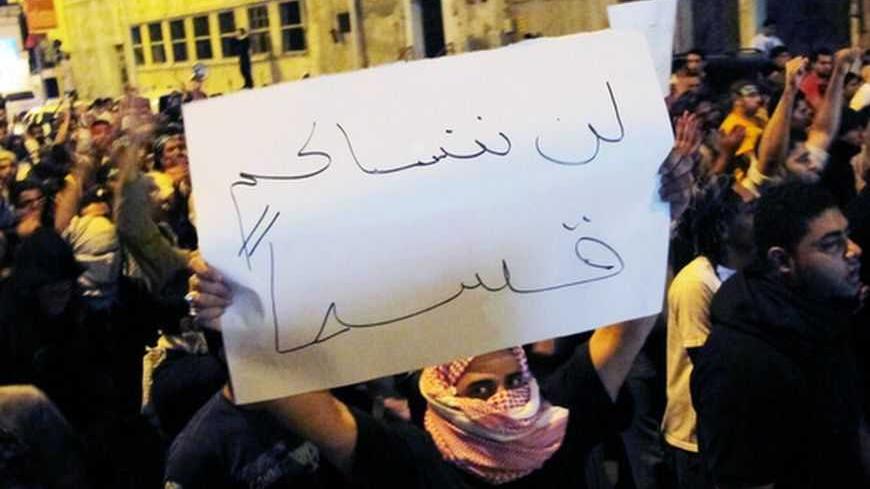 Protesters chant slogans and hold posters during a protest in Qatif March 9, 2011. - REUTERS

On Twitter, the social media site now used by about 400,000 Saudis, anonymous government tweeters are derided as “egg people” because they don’t post their pictures and are thus depicted only by white ovals.

This detail is among many fascinating nuggets in a new book — A Kingdom’s Future: Saudi Arabia Through the Eyes of its Twentysomethings — in which veteran journalist Caryle Murphy presents a nuanced portrait of Saudi youth and explains the challenge they pose to the government and society of a pivotal economic and regional power.

Like the eye of a hurricane, Saudi Arabia has been relatively peaceful over the past two years while popular uprisings have swirled around it. Only in the restive Shiite east of the country have there been significant protests, which the government has handily suppressed. Still, the kingdom is facing what Murphy describes as an “increasingly bumpy” two decades as it contends with demands for jobs, homes and other material benefits and greater personal freedom from its youth, who comprise 64% of the country’s 19 million citizens.

Murphy’s account, drawn from interviews conducted while she worked as a reporter in the kingdom from 2008 to 2011 as well as encounters with Saudi students abroad, is less gloomy than another recent book on Saudi Arabia that depicts a country seething with tension and anger. Murphy does not foresee an end to the monarchy or rejection of the country’s conservative Islamic faith and traditions. But she does predict more pressure for acceptance of individuality, growing rejection of official interpretations of Islam and increasing demands for economic justice.

“Young people are worried about unemployment and being able to find an affordable home for their family,” Murphy writes. “They are angered by the perceived favoritism in government services, and the need for a wasta, or contacts, to get many things done […] Above all, they express a deep desire for greater freedom and space in their personal lives, whether it be how they dress, what major they choose at university or classes they take in high school.”

The pressure for change is due in part to modern technology as well as the dispatch of more than 140,000 students abroad. Saudi youth are more connected to each other and to global trends than ever before.

Internet users have grown from about 200,000 12 years ago to an astonishing 14.7 million — more than half the country’s residents. Among young people aged 18 to 24 in 12 Arab countries, Internet use was the highest — 91% — in Saudi Arabia, Murphy writes. Saudi Arabia is also first in the survey in terms of Twitter users.

Thus when Saudis protest, they often turn to social media. A Saudi woman confronted by religious police and ordered to leave a Riyadh shopping mall because she was wearing lipstick and nail polish filmed the encounter and posted it on YouTube on May 23, 2012. It was viewed nearly two million times in only a few weeks, Murphy writes.

Manal Al Sharif led a 2011 campaign against the ban on female driving by filming herself driving and posting the video, which soon went viral. In 2012, Hamza Kashgari, a 23-year-old blogger and writer, created an uproar by posting an imaginary conversation with the Prophet Muhammad on Twitter in which Kashgari said he would treat the Prophet as a mere human being.

The virtual protests have not brought practical change — Kashgari still languishes in jail and Murphy predicts Saudi women will get to vote (in relatively meaningless municipal elections) before they are allowed to drive. But the protests have provided an outlet for frustration and have provoked vigorous debates in a country with scarcely any other authorized public political space. Murphy quotes a Riyadh businessman and activist, Mohammad Al Ojaimi, as saying “Twitter is our parliament now.”

Saudi minds are opening in other ways, as shown by the growing popularity of non-government clerics. Challenges to the “enforced dominance” of Wahhabism, the austere state religion, have increased since the death in 1999 of Grand Mufti Abdul Aziz bin Baz, Murphy says. His successor, Grand Mufti Abdul Aziz Bin Abdullah Al-Asheikh “just does not carry the same weight or prestige,” she writes. The current grand mufti has called Twitter “full of ‘lies’ and dangerous for Muslims, sanctioned marrying off girls as young as 10 and declared that foreigners aiming to harm Islam caused Egypt’s 2011 youth protests.”

Murphy quotes a 23-year-old medical student in Jeddah as saying that this mufti “doesn’t live in the world we live in.”

This is not to say that a majority of Saudi youth are turning away from Islam in the place where it was born. The most popular preachers — Mohammed Al Arifi and Salman Al Audah — are hardly liberals. Al Arifi, for example, supports polygamy. Many young Saudis interviewed by Murphy also support retention of the infamous religious police who monitor public behavior, but say the police should interact with the public more politely and not concentrate on minor issues such as whether women are covering their faces.

Murphy spends considerable time discussing the issue of women’s rights — the third rail of Saudi society — noting different views on whether women should continue to need the permission of male guardians to travel and to work outside the home. Not surprisingly, more women believe there will be major changes in their personal freedom in the next five years than men — 75% of women, in a recent poll of Saudi university students. But nearly half the men polled — 49% — agreed.

Economic pressures as well as the fact that women outnumber men in Saudi universities suggest that more women will enter the labor force and that Saudi men will adjust — even if most men prefer that their wives work in female-only workplaces. Murphy also discusses the phenomena of Saudi women refusing to marry and the rising divorce rate.

The biggest challenge facing Saudi Arabia is social and economic: finding jobs for three million Saudi youth by 2015 and six million by 2030. Despite historic government pressure on private companies to hire Saudis, 90% of private sector employees were still foreigners in 2009. Also, the private sector is growing too slowly to accommodate new job seekers. Youth unemployment is high: nearly 40% for those aged 20 to 24; 27% for those under 30.

The poor state of the Saudi educational system underlies the job crisis. Although the government has been pouring money into new schools, Saudi teachers still emphasize rote learning and religious studies that are incompatible with modern employers’ needs. Murphy writes hopefully about the potential influence of returning Saudis sent abroad for higher education, but it is doubtful that will be sufficient to solve the crisis without a major shakeup in how the majority of Saudis are taught at home.

Young Saudis also worry about the coming political transition from the much-beloved King Abdullah to the next generation of Saudi royals. Tribal and regional tensions could rise during this period and there will likely be new fights over the division of the kingdom’s oil-based wealth.

Overall, Murphy predicts a challenging future for a pivotal Arab and regional state. The outcome of the battle between tradition and modernity and the manner in which it is waged in Saudi Arabia will have ripples throughout a region already buffeted by religious extremism and political change.