Suicide bombings on the rise among Shiites

While suicide attacks were once the preserve of Sunni extremist groups, there have been reports of recent attacks in Syria carried out by Shiite militants fighting alongside the Assad regime. 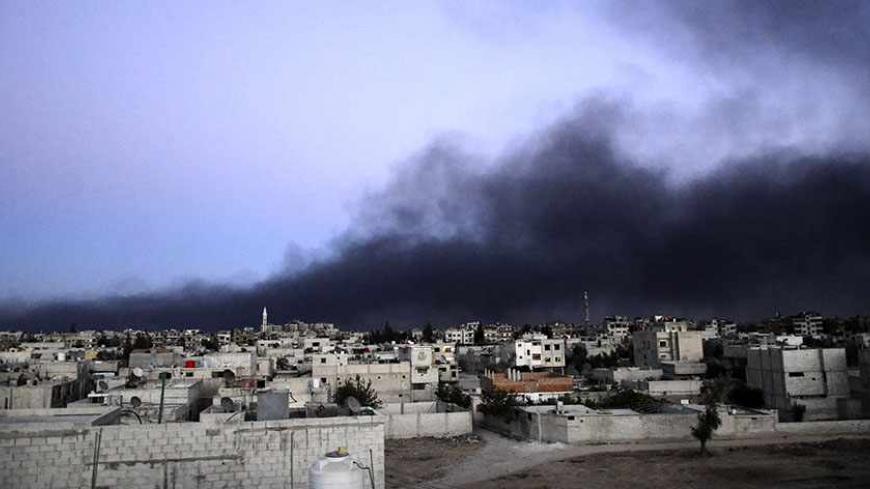 Smoke rises into the sky after clashes in eastern Ghouta, Sept. 15, 2013. - REUTERS/Bassam Khabieh

Over the past few years, Sunni extremist groups in the Middle East have carried out suicide attacks on a large scale, tipping the balance in their favor in the fight against their enemies, be they Western forces or regimes in the region. Similar operations by Shiite militants have largely been unheard of in recent years, but it seems that the current, deep sectarian divide has enticed some Shiites to carry out suicide attacks against their Sunni enemies.

In a Dec. 1 interview in Dahiyeh, south of Beirut, a source close to Shiite militias fighting in Syria informed Al-Monitor of two Shiite suicide attacks that took place during the last week in November. Civil activists inside Syria confirmed the events, which were launched during clashes in Ghouta, near Damascus, against opposition militants.

Al-Monitor's source said, "A small Shiite group of 20 militants was fighting against 500 opposition militants in the Ghouta region, near Damascus. The chances of winning the battle were very slim, and there was no way to withdraw from the battlefield. A heroic young man had wrapped explosives around his waist and rushed toward the enemies and blew himself up, killing and wounding about 100 combatants."

This was not the first Shiite suicide attack, referred to as "martyrdom operations." Such attacks have proven to be a successful means of unorganized fighting on the part of various groups affiliated with Shiite political movements. For instance, the Islamic Dawa Party exploded a car bomb at the Iraqi Embassy in Beirut in 1981, killing more than 60 people including diplomats, employees and Lebanese visitors. Scores were, of course, wounded. The party carried out a number of similar operations in Iraq.

A number of young men volunteered for suicide operations during the 1980-1988 Iran-Iraq War. Among them was Mohammed Hussein Fahmida, 13, who became a hero of the Islamic revolution when he blew himself up in front of an Iraqi tank to stop it from reaching the Iranian city of Khorramshahr at the beginning of the conflict.

Nevertheless, the magnitude of suicide attacks on the part of Sunni groups is significantly higher when compared with those carried out by Shiites. This is in part because Shiites and Sunnis have fundamentally different views about targeting civilians. Whereas Sunni scholars have issued fatwas permitting the killing of civilians to eliminate the enemies hiding among them, there has thus far been no Shiite fatwa justifying suicide attacks on the battlefield or in any other situation.

A Hezbollah field commander was asked In an Al-Monitor interview how the party justifies the suicide operations in Syria. He replied, “[Hezbollah leader] Hassan Nasrallah had gone to Iran before he officially declared the party’s intervention in the war raging in Syria. Iran’s supreme leader, Ali Khamenei, told him that Syria is the second Karbala. This means that we must sacrifice our lives for this cause, as did Imam Hussein in Karbala,” he said.

Until regional and international parties reach a reasonable compromise on the Syrian issue, escalating tensions are likely to lead to more suicide attacks on both sides, as they have made it clear that the Syrian cause has become a matter of honor.