Romanian Foreign Minister Titus Corlatean is doubtful about Israelis and Palestinians arriving to an agreement soon, unless US President Barack Obama intervenes. 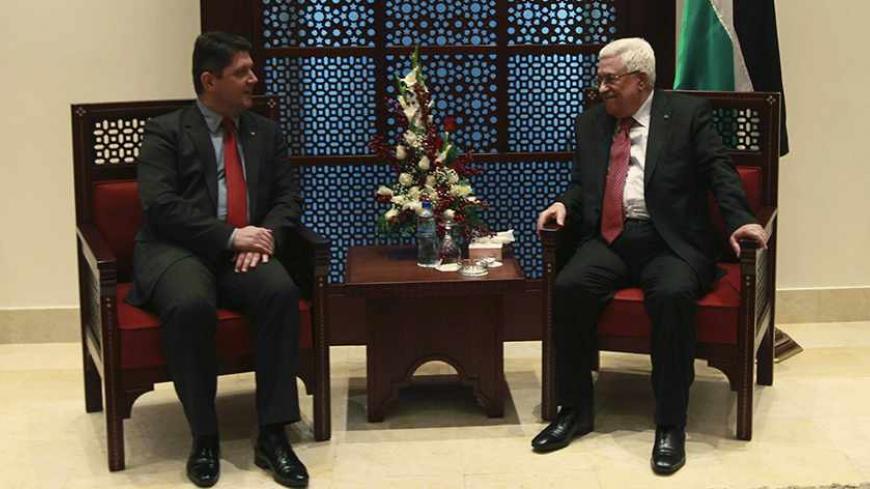 What better day to herald to the world the birth of a new settlement plan than the day on which the world, the one that keeps bothering Israel with all sorts of peace plans, is enjoying its Christmas dinner? On Dec. 23, we published the stern warning of the European Union’s ambassador to Israel, Lars Faaborg-Andersen, to the effect that a declaration of massive construction in the settlements on the day of the third Palestinian prisoner release, scheduled for Dec. 29, as occurred after the previous two rounds, could severely damage the process.

“The responsibility for the damage would be put squarely on Israel’s doorstep,” the senior diplomat told Al-Monitor. This was the message, the ambassador added, that he and his EU colleagues had delivered directly to Israel’s top political echelons.

On Dec. 25, the Israeli prime minister’s office announced that this time, too, the prisoner release will be accompanied by construction permits in the settlements. (By the way, what’s the connection between the moral issue of releasing murderers and the settlers? Are they the only ones who deserve a consolation prize for the pain of the families of terror victims?)

A short while after the impending wave of settlements was announced, I met the young foreign minister of Romania, Titus Corlatean, 45, one of the leaders of his country’s Social Democrat Party. The minister was a guest at the Tel Aviv home of his friend, the Romanian-born former Knesset member Colette Avital, director of foreign affairs for the Meretz Party. Earlier, he had met in Bethlehem with the Palestinian leadership, which came there to pay its respects to the Christian community on its festive day.

During his stay, Corlatean met with his Israeli counterpart, Avigdor Liberman, and with the chairman of the opposition, Knesset member Isaac Herzog. It appears Corlatean was ready for the question about the strange linkage between releasing prisoners and expanding settlements.

“As a politician, I am not interested in answering your question specifically,” Corlatean the politician answered carefully. But Corlatean the diplomat was quick to complete the response: “Nonetheless, I think, both sides must avoid unilateral steps that could endanger the diplomatic process. I told the Palestinians that they should appreciate the Israeli gesture regarding the prisoners, but I don’t see any reason to link it to a unilateral move. During the meetings I held in Jerusalem and Bethlehem, I discovered that the main challenge to an agreement is the rehabilitation of mutual trust, which has reached a low. Such steps do not contribute to this.”

Hinting at the unusual silence of Palestinian President Mahmoud Abbas in the wake of the latest wave of violence against Israelis, the Romanian minister added, “I told my Palestinian interlocutors that it’s important to hear from their mouths a sharp public condemnation of any manifestation of violence.”

Since the days of Romanian dictator Nicolae Ceausescu, Bucharest has treated Israel with special care due to the large and active Jewish community there. Like most central European countries that went from communism to democracy, Romania tries to skip over the abundant landmines spread throughout the Israeli-Palestinian arena. In the November 2012 UN vote on upgrading the status of the Palestinian representation, Romania chose to abstain. Corlatean also did not affix his signature to the letter of 13 EU ministers announcing their countries’ decision to label products made in the settlements. In the interview with Al-Monitor he declared proudly that over the years Romania has managed to maintain open channels with the Israelis and the Palestinians.

But this state of affairs couldn’t last forever. And in fact, at the beginning of December, the lengthy talks between Israel’s Foreign Ministry and its Romanian equivalent over the employment of Romanian construction workers broke down. It happened after Israel rejected Romania’s demand that the workers not be employed in the construction of settlements across the Green Line. Israel’s building contractors association was quick to announce that such a decision would exacerbate the severe shortage of construction workers and deepen the housing crunch, as well as raise the price of housing. Knesset member Michal Rozin of the Meretz Party, who heads the Knesset Committee on Foreign Workers, criticized the fact that Israelis were being hurt by the state’s policy in the territories.

When settlement policy threatened to damage Israeli science and research, the Benjamin Netanyahu government signed a commitment that Israeli institutions operating beyond the Green Line would not benefit from grants of the EU’s Horizon 2020 research and development program. Will the plight of tens of thousands of young couples and others needing housing persuade the government to give in on the issue of the Romanian construction workers?

Corlatean hinted that his visit was designed, among other things, to find a creative solution to the dispute. He half apologized, half explained that the decision to prevent Romanians from working in Israel “expresses the Romanian government’s consistent position, since we joined the European Union in 2007, and is in keeping with EU decisions.”

Corlatean explained that Europe cannot afford to display indifference toward the Middle East, since the implications of events in the region affect every corner of the continent. “We are witnessing the growing infiltration of jihadists into Europe and the exploitation of the economic crisis to spread xenophobia, populism, racism and anti-Semitism." (One of the national television stations in Romania aired a Christmas carol that includes the lines: "The kikes, damn kikes, Holy God would not leave the kikes alive, neither in heaven nor on earth, only in the chimney as smoke, this is what the kike is good for, to make kike smoke through the chimney on the street.")

Corlatean notes that the European Union is the chief source of funding for the Palestinian Authority and the civil society in the territories. “Without our support, things there would have been a lot worse,” he said. “We are prepared to be partners in a peace package, together with the United States and other countries, but if we don’t see progress toward an agreement, we will not keep funneling money to the Palestinians forever.”

During his visit he did not discern real progress in the negotiations being orchestrated by US Secretary of State John Kerry. Kerry’s effort to reach an agreement within the nine months he has allotted for himself and the sides, said the Romanian minister, is commendable and even essential. Essential, but not sufficient. “The moment of decision is drawing near and as it does, US intervention at the highest political echelon will be needed. I am referring to President Obama getting into the thick of things,” he clarified. “If the current move fails, the two-state solution will disappear. There’s no alternative to this solution.”

Corlatean foresees that 2014 will be a critical year for the Middle East — a period of decision in the diplomatic process between Israelis and Palestinians, in the war in Syria and the implementation of the agreement that will be reached with Iran for the closing of the nuclear file. “I hope that next year things will change for the better,” he summed up. “Because if not, they will change for the worse.”