It was a mistake for the prime minister's advisers to invoke late Israeli singer Arik Einstein's modesty in trying to defend Netanyahu's extravagant expenditures. 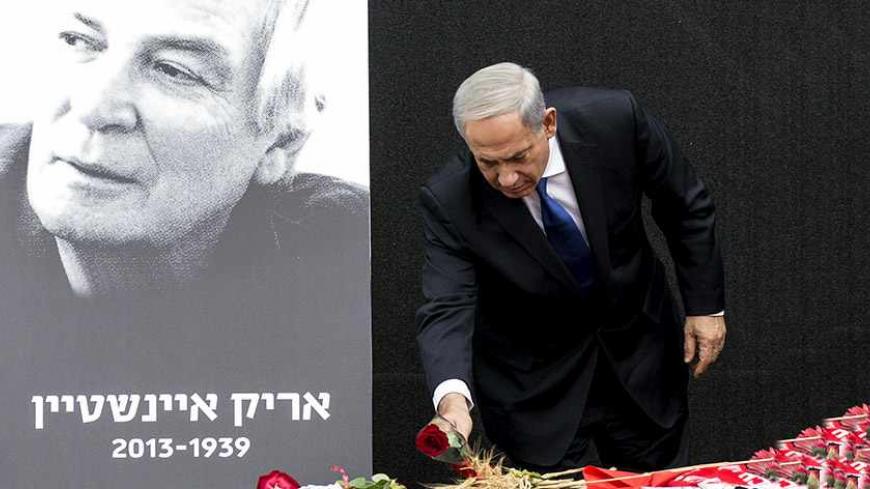 The Dec. 1 response from Israeli Prime Minister Benjamin Netanyahu’s office to outrage over the scandalous household expenses of the premier and his wife Sara was so insensitive and tactless that even the most cynical political correspondents were left dumbfounded.

The general sense was that this time, someone had really gone too far. That there are some things you just do not do, even when the public turns against you. That all good sense and shame was lost, just for the sake of gaining a few more points with the public.

Netanyahu and his advisers certainly thought that they were making a brilliant move when they pulled out of their archives statements made by late Israeli singer Arik Einstein in a flash of empathy toward Netanyahu in 1998, during his first term as prime minister. However, the instrumental and ugly use of statements taken from another time, during a period of national mourning, had the exact opposite effect.

“We would like to open our response by quoting the late Arik Einstein,” began the prime minister’s official response. It quoted the singer, who had passed away just five days earlier, as saying, “They do horrible injustice toward Prime Minister Netanyahu. They abuse him, and I’m simply shocked at the force of the disrespect and hatred shown to him. To what degree can they continue to suck his blood?”

It didn’t matter to Netanyahu’s team that these statements were made 14 years ago, and since then, Einstein had actually criticized the ostentatious lifestyles of Netanyahu and former Defense Minister Ehud Barak, given the large social gaps in Israel. Like someone who has just found a treasure, they squandered the statement, taking it out of context, to justify a lavish lifestyle that is completely detached from the reality around them, and in doing so, they defiled the memory of the man who had become a symbol of modesty.

They ignored another interview Einstein gave to Yedioth Ahronoth in 2011, in which he decried the gaps between the rich and the poor. Among other things, he said, “Something happened to us. It’s not that Bibi [Netanyahu] and Barak are the only ones guilty of ostentatiousness. … These types of people need to be punished in the elections. People who live a lavish lifestyle, their integrity is lacking.”

One cannot be more explicit than that.

To a large extent, the political use of a cultural icon — grief over whom swept the entire country — is even more serious than the sin of avarice, because it proves that in Netanyahu’s office, all moral values are lost. When it comes to the prime minister’s personal survival, there is no room even for honoring the dead.

The first couple was on an official visit to Rome this week when Haaretz released the numbers, once again showing a lavish lifestyle. This comes on the coattails of data published by the OECD in May that show that the poverty rate in Israel is the highest among the developed countries.

This is not the first the Israeli public has learned of the first couple’s whims, which come at a high cost to taxpayers, but this time, the media and public impact was stronger than in the past. Social networks were flooded with angry posts and caricatures that lampooned the hedonistic couple, whose water bill for their private home in Caesarea alone cost taxpayers 80,000 shekels ($22,700) in 2012, and whose budget for the scented candles that make their home more pleasant reached close to 6,000 shekels ($1,700).

It is conceivable that the public outcry was so intense partly because Einstein had died just a few days earlier, giving rise to a strong public outpouring of emotion. His greatness as a singer contrasted vividly with the simple lifestyle he lived for decades — the average apartment he lived in, the lowbrow restaurant he liked best and his unconditional love for the country of his birth.

Arik Einstein was not a materialistic man, and it wasn’t posturing on his part. It was completely authentic, making him a reverse image of the Netanyahus: Only six months ago, they were forced to explain why the public, which is enduring a high cost of living and taxes, needed to pay 10,000 shekels ($2,800) a year for expensive pistachio ice cream or half a million shekels ($142,000) for a special double bed installed in an airplane for one-time use on a short flight to London for former British Prime Minister Margaret Thatcher’s funeral.

Now back to this past Sunday. When the prime minister’s entourage recognized that things at home were getting out of control — the Netanyahus were being slaughtered in the media and no one from their inner circle or any of the Likud ministers were ready to stand up and defend them — it started to panic. From this point to recruiting the unwitting Einstein to the campaign, the road became quite short.

This was a veil sewn with crude stitches that was supposed to turn down the public heat on the first couple by invoking a symbol of modesty and simple living. However, that is exactly why it was unconvincing and the effort only magnified how detached the couple is from the public and how despised the couple is.