The Netanyahus continue enjoying an extravagant lifestyle despite criticism from the public, which faces a new austerity plan. 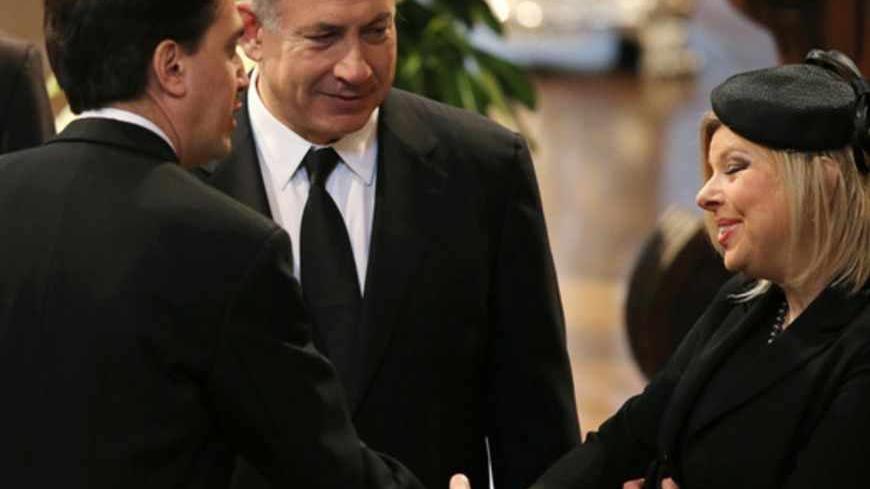 Some seven years ago, on the eve of the 2006 elections, I had an opportunity to chat informally with Sara Netanyahu, the wife of the prime minister. The air was tense at the time. The Likud was facing the greatest debacle in its history and Prime Minister Benjamin Netanyahu, the party leader, was forced to contend with the establishment of the Kadima Party and the tremendous anger of his own party’s voters at the budget cuts he had inflicted on them as finance minister.

That was the backdrop of the conversation with Mrs. Netanyahu. She was full of anger and complained bitterly about the ungrateful Israeli public and media. “My husband,” she said excitedly, over and over, “saved the Israeli economy. He did great things for the people here and instead of appreciating his contribution, they keep going after him.” I don’t remember if she used the word “persecution,” but there’s no doubt she gave off a strong sense of persecution after repeating over and over, for a whole hour, the same mantra about lack of gratitude.

Sara Netanyahu had occasionally made similar remarks before that time and has since then. In the best known of these, which was even recorded by Likud activist Shimshon Deri in 2002, she is heard lashing out at the “ungrateful” Likud party members who transferred their support to then Prime Minister Ariel Sharon (when he established Kadima). Among her more memorable remarks: “Bibi [Benjamin Netanyahu] is too great a leader for such a small state,” and “he is a leader of international status … why does he have to go through so much trouble? Without him the state won’t be able to keep going. People will be slaughtered. We’ll go abroad and the country can burn in hell.”

The couple did subsequently apologize, but the feeling that Israelis “should be grateful that Bibi is their prime minister” is alive and well. It also provides a certain explanation for their profligate lifestyle, to which we were exposed once again at the end of last week (May 13), when it was reported that spending at the prime minister’s official residence had rocketed by 80% in three years — from NIS 3 million in 2009 ($824,000) to NIS 5.44 million (more than $1 million) in 2012.

Just two years ago, the social protest that erupted here shook Netanyahu’s chair, but unfortunately it did not change a thing in the couple’s conduct regarding public spending.

We have barely recovered from the “ice cream scandal,” which broke out after it was revealed that the prime minister’s office had been granted special permission to buy ice cream for him at an annual cost of NIS 10,000 ($2,700). The vanilla-pistachio ice cream in question was “especially to the liking of the prime minister’s personal taste,” it was explained on the official spending request. The budget item was scrapped following the public outcry.

Some 10 days ago (May 10), Channel 10 News reported that in preparation for the Netanyahus' travel to the funeral of former British Prime Minister Margaret Thatcher, a special (double) bed was installed for them on the plane at a cost of half a million of the taxpayers’ shekels ($137,000). Netanyahu’s people explained that the flight followed the prime minister’s strenuous activity at events marking Israel’s Independence Day and he therefore needed some rest. The couple’s “subjects,” who were told that month that they would be required to carry the burden of an austerity budget, rightly asked themselves why their prime minister was unable to spend the five-hour flight taking a royal nap on the first-class armchairs.

Their sense of outrage was compounded with the publication of a touching photo showing the late Prime Minister Menachem Begin, immortalized by the excellent photographer David Rubinger, taking a nap on a flight to the United States, folded up in a fetal position on two regular seats. “It’s outrageous that Begin took up two seats,” was one of the cynical responses to Rubinger’s publication of the photo on his Facebook page.

No one is asking the Netanyahus to fold up their legs on coach seats when flying on official visits, as did Begin, who was famously spartan. By the way, his travel conditions did not prevent him from returning from one of his trips to the United States with a historic peace agreement between Israel and Egypt.

We haven’t even asked the Netanyahus to give up their makeup artist and hairdresser. We wouldn’t want them looking unkempt. But we would be glad if they paid their personal expenses, such as ice cream or pizza, out of their own pockets, as does US President Barack Obama. That is what’s known as “for the sake of appearances.”

One might have expected the couple to be more sensitive about their public image, even if they are not sensitive to their public, and to take into consideration the way things appear, which is an elementary component in the toolkit of any public relations novice.

When harsh budgetary cuts are about to be approved by the Knesset and the Organisation for Economic Co-operation and Development reports that Israel has the highest poverty rate among developed nations, one could have expected a different behavior. For example, one might have expected Mrs. Netanyahu, who is so fearful about her husband’s image and boasts of her professional abilities as a child psychologist, to exhibit a reasonable level of self-awareness.

Publication of the bloated prime minister’s budget, coming as it did on the heels of the budget cuts being cast on the public each day, resulted, as expected, in floods of harsh and fiery criticism of the “insensitive” couple on the social media networks.

Will this change anything? Probably not. Given the couple’s behavior pattern each time their wastefulness is exposed, they might grace us with a half-hearted apology or, perhaps, ignore the whole thing, until next time. Because according to Sara Netanyahu, we are the ones who should be grateful that her husband deigns to lead this ungrateful nation.