Singer Arik Einstein symbolized to Israelis all that was and is beautiful, pure, modest and creative in the country. 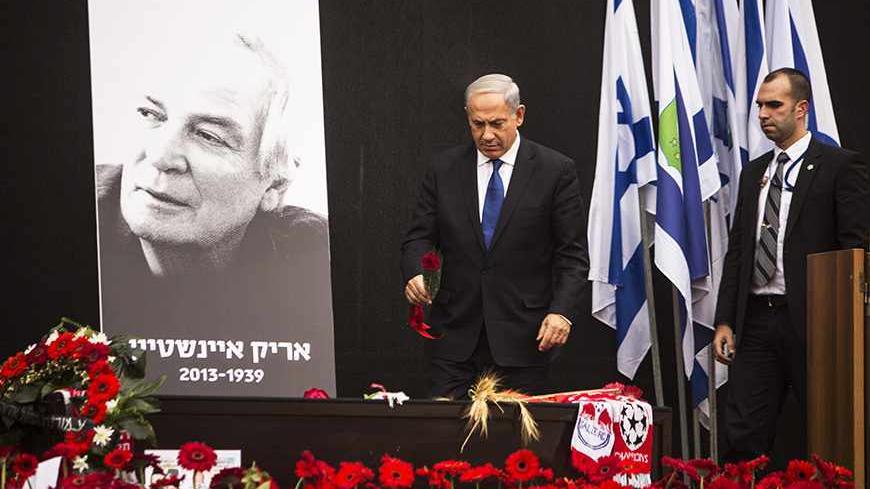 Israeli Prime Minister Benjamin Netanyahu (C) lays a rose on the coffin of Israeli singer Arik Einstein, depicted on the placard, during a memorial ceremony before his funeral at Rabin Square in Tel Aviv, Nov. 27, 2013.

The last time that scenes of such grief and pain were seen in Israel was the night that Israeli Prime Minister Yitzhak Rabin was assassinated. Yesterday, Nov. 26, as on that night in 1995, people were standing in the Ichilov Hospital Square in Tel Aviv, waiting for someone to emerge and announce that everything would be OK. But then screams of disaster and shock were heard, accompanying the voice bringing evil tidings. Young boys and girls lit candles in Tel Aviv's Rabin Square and sang, "Where are there still people like that man." The television stations interrupted their broadcasts and adopted a mourning format; performances and events were halted and announcements were made to audiences on the loss of the special, prominent voice in their lives. The pain was of an entire country that lost something of itself.

The director of Ichilov Hospital, Gabi Barbash, went out to the journalists who waited in the entrance. In two sentences, Barbash said it all: "Twenty-five minutes ago, we declared the death of Arik Einstein. Now we have no one to sing to us anymore."

Arik Einstein departed to the next world abruptly, within a few hours, due to a ruptured aneurysm and it seems that the "beautiful and good Israel" of once-upon-a-time departed with him. He was 74 at his death.

Einstein started off in the Israel Defense Forces Nahal Band where he immediately became a star, and from then until today he was the "voice of the country." His beloved songs accompanied Israelis everywhere: “Ouf Gozal” (Fly, Little Bird) — which is sung by all Israeli children at their end-of-year school parties, and by all parents to their high-school graduates before their army recruitment — and "Shalom Chaver" (Goodbye, Friend), a song based on the word-combination coined by US President Bill Clinton in Hebrew after Rabin's assassination. Einstein's songs are the soundtrack of Israeli life. A few years ago, Einstein's "Atur Mitz'chech" (Your Forehead Is Decorated) was voted as the most beloved song out of the hundreds that he sang, in a poll taken by newspaper Yedioth Ahronoth. There were many other famous songs, too, including “Ani Ve’ata” (Me and You) to which Einstein also wrote the words: "You and I, we'll change the world; you and I, by then everyone else will follow. Others have said it before me, never mind; you and I, we'll change the world."

And how we wanted to change it, when this song played in our heads.

Einstein's death flooded Israelis with great pain and longing. He was, in the eyes of many people, a symbol of a country that is fast disappearing: genteel, modest, good-looking, simple, a person with a sense of humor who loved humanity and sports. He was also humble, even shy — for example, when he played the part of the young kibbutznik named Ziggy with the tembel hat in Ephraim Kishonthe 1950s film "Sallah Shabati." The kibbutznik fell in love with a new immigrant from one of the Arab countries at a time when inter-ethnic tension in the country was at its peak.

But since then and throughout the years, numerous additional tensions emerged which caused much pain in the adult Einstein. In an interview he gave to Yigal Sarna, Einstein said, "I am not capable of understanding all the wickedness that has accumulated, all the insensitivity. On the other hand I am so full of love for this place, mainly the people. The contrasts here are so strong. There are such evil things here and on the other hand there is beauty and charm. So many talents, an ocean of good people. Good music. It seems to me that we are unique in our extremism. Diametrical opposites. Once I used to believe that 'to be human' meant being ethical. Now I already know that humanity also encompasses in it evil and obtuseness, and the evil always stands out."

With these words, Einstein summed up the feelings of many people in the country regarding Israel: the sense of belonging and lack of belonging, the love-hate relationship that many have with the state. To them, Einstein was Israel's good part, its sensitive, lovely and connecting side. For years Einstein refused to perform, and lived in a modest apartment in Tel Aviv. Einstein's death is viewed as the demise of this pure "Israeliness" before it was damaged and marred. His death marks the loss of yet another segment of the country that we are slowly losing to religious extremism, nationalism and racism, to the large schisms created in the society.

Israel of 2014 is splintered and angry, full to the brim with reality shows and stars born for brief moments of fame. Such a society is no longer capable of producing someone who can touch the hearts of most of the population, whose voice will reach everyone. Einstein was such a person. But perhaps, one day, all the wonderful people he spoke about in the Yigal Sarna interview will unite and do something. Then the words of his famous song will be endowed with significance in reality as well: "You and I, we'll change the world; you and I, by then everyone else will follow."

In his own way, Einstein succeeded in changing the world. In his death he also proved to us all how much we long for the Israel that he represented for at least a 50-year jubilee.