New billboards in Tehran encouraging families to have more children have been criticized as sexist and dismissive of the serious economic issues Iranians face. 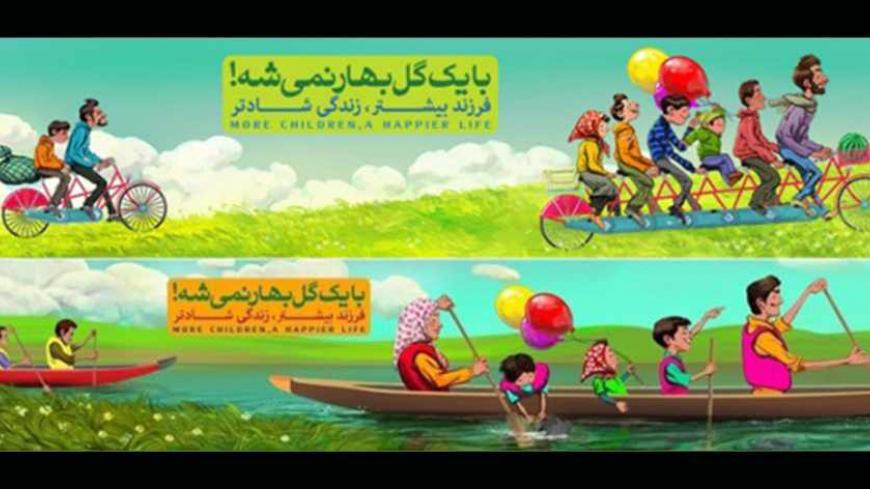 The first line of a billboard reads, "A single blossom is not spring/More children, a better life." - www.askdin.com

About 47 years ago, the motto “Fewer children, better life” penetrated deep into Iranians’ homes and affected reproduction norms in the quest for a more comfortable lifestyle. The slogan was a major effort by the Pahlavi administration to curb population growth, a campaign to persuade families to have fewer children.

Last year, Iran’s supreme leader presented an extremely different and updated approach to people’s private lives, encouraging them to produce more children and adding that the Iranian population should move toward at least 150 million people (almost double that of today).

Over the past year, the government and nongovernmental organizations have attempted to spread Supreme Leader Ayatollah Ali Khamenei’s words discouraging people from using contraception.

During the early years following the 1979 revolution, the newly founded Islamic Republic of Iran tried its best to persuade people to produce more children. Soon after the conclusion of the eight-year Iran-Iraq war, the administration commenced organized efforts to dissuade couples from reproduction and basically emphasized the same exact message that the previous government had been so adamant to spread.

“A single blossom is not spring.”

Early in December, a billboard with this slogan began to pop up along major highways along with others encouraging families to have more children. Other billboards saying, "More children, better lives" depicted a large family bicycling happily on a single bicycle, with a father and son not so happily trailing behind. There was one notable exception on both bicycles. The mother was missing.

In an interview with Fars, Ehsan Mohammad Hassani, executive director of the Owj media production company behind the billboards, responded to questions and criticism about the illustration appearing on newly installed billboards in the capital. When asked why there is no mother shown in the picture of a happy family pedaling a tandem bike, he answered, “Out of concern for appearing to promote cycling for women, we decided to exclude the family’s mother from the picture.”

While cycling is not illegal for Iranian women, it has been discouraged and frowned upon for more than 30 years. Faezeh Hashemi, Ayatollah Akbar Hashemi Rafsanjani’s daughter, succeeded in pushing the issue and persuading authorities to greenlight women’s biking, starting by dedicating bike paths to women. However, nowadays women are practically limited to biking in parks, as cycling on the streets has been described as “shameless and lust-provoking” by some hard-liners. Iranian women are rarely seen cycling on the streets.

Aside from the issue of women cycling, the new billboard campaign to encourage reproduction has also sparked much debate and anger among a large group of Iranians who view having more children as economically unfeasible, given Iran's abysmal economy. They express frustration with the status quo and grave concern over adding to their family members. Iranian cartoonist Ehsan Ganji even redesigned the billboard by adding, below the happy cycling family, the mother at home, pregnant and with a child strapped to her back, looking unhappy and standing over a boiling pot.

Some other points have been brought up as untrue or fudged in the ad, such as the color of the sky (which is blue despite the lingering pollution that seldom allows the sky to be seen in Iran’s bigger and busier cities), but what many took issue with was the absence of the reproductive pillar of any family: the mother. Many believe the mother of a “model family” has been purposely slighted. Others jokingly say the mother has not been overlooked — she is just resting after her latest child-making and childbearing efforts.

Farzin, a graphic designer who holds a master’s degree and owns an advertising company in Tehran, tells Al-Monitor, “While I could list at least 10 gaffes in this painting that stand out as signs of illustration weakness, the most outstanding shortcoming is the absence of a mother figure.”

In another billboard promoting the same subject, the modern family is shown on a rowboat, with the father sitting at one end of the boat and the mother at the other. The boys sitting in between have life jackets on, while the little girl does not. This is another piece of advertising regarded as insensitive toward women.

Mina, a university professor in Tehran who holds a doctorate in sociology and specializes in women’s studies, tells Al-Monitor that omitting women from the billboards is a serious insult to the most significant element of a family: its nucleus. She adds, “I am, however, not surprised at all. It seems like whatever had been done for the advancement of women prior to the 1979 revolution, and all the effort focused on empowering women within the framework of the Islamic penal code — mostly made during President [Mohammad] Khatami’s era — has gone to waste. Sadly, I don’t anticipate things becoming drastically better for women during [Hassan] Rouhani’s presidency.”

An old Persian proverb says, “Mothers are only passersby in their children’s lives,” emphasizing the significance of fathers’ roles in families. Not many Iranians of this era have ever heard the saying, and some of those who have repeat it sarcastically. The extent to which the new administration will push this new national reproductive policy will certainly have ramifications for women's issues, women's rights and field of communications, in which this policy was disseminated.