While Hezbollah and Saudi Arabia have been at odds for months over their opposing positions in the Syrian war, Hezbollah has recently escalated its rhetoric, directly accusing Riyadh of waging open warfare against the party. 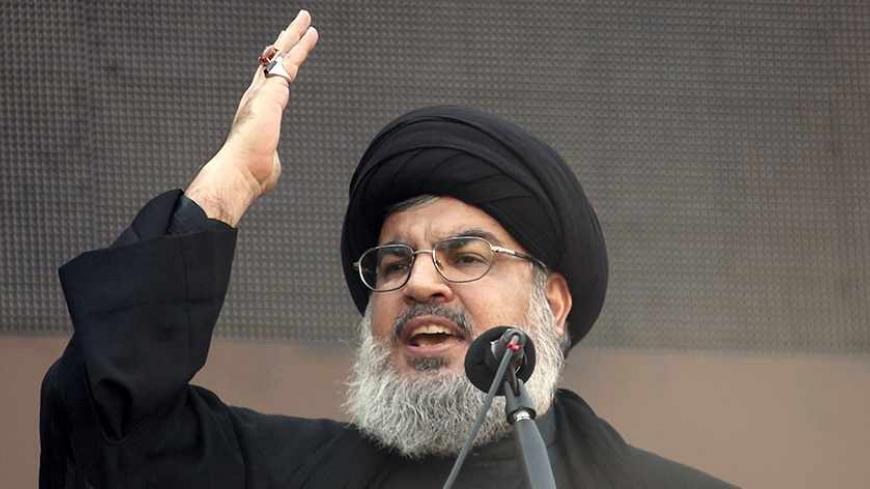 During a lengthy televised interview on Dec. 3 with Al-Monitor columnist Jean Aziz, Hezbollah Secretary-General Hassan Nasrallah verbally attacked the Kingdom of Saudi Arabia, accusing its intelligence services, led by Prince Bandar bin Sultan, of financing the Islamist suicide bombers perpetrating attacks in Lebanon and Syria. The intensity of his attack reached the point of Nasrallah dissenting from the position of his ally Iran that Israel had been responsible for the twin suicide attacks aimed at leveling the Iranian Embassy in Beirut on Nov. 19. Nasrallah opined that Iran, as a nation, is legitimately trying to safeguard its interests and that the embassy bombings were an expression of Saudi anger toward the nuclear agreement reached in Geneva between Tehran and the P+5 powers.

Previously, Nasrallah had never mentioned Saudi Arabia by name when criticizing it. This recent frontal assault, however, reflects the depth of the crisis that has come to mar relations between the two sides. A Hezbollah source speaking to Al-Monitor described the level of tensions as being akin to a declaration by Riyadh of an open security and political war against the party.

In essence, the current crisis between Saudi Arabia and Hezbollah revolves around the so-called Riyadh rejection of Iranian influence in the Arab world — particularly in the Levant, and especially in Syria, Iraq and Lebanon. Riyadh considers Hezbollah to be Iran’s enforcer in the Levant, and its anger against the party grew after Hezbollah expanded its activities beyond Lebanon to play an effective military role on the side of President Bashar al-Assad’s regime in Syria. Riyadh points to the battle for Qusair, in which the party fought earlier this year, as proof of its expansion beyond Lebanon’s borders and its championing of Iranian influence in the Middle East arena.

On Nov. 28, the Gulf Cooperation Council announced the imposition of additional sanctions against Hezbollah interests within its member states. It also threatened to expand the sanctions if the party’s military presence in Syria continues. In response, Nasrallah replied that anyone who thinks his party will withdraw from Syria as a result of security, economic or political pressures is gravely mistaken. Prior to that, in a speech on Aug. 16, he had declared that he “would not hesitate to go fight there [personally], if the battle to defend Syria necessitated that he and his party do so.”

The strong, prevailing impression inside Hezbollah is that Saudi intelligence is waging an unprecedented security and political mobilization campaign against it, with the aim of weakening its political resolve, especially its participation in the Syrian war. The party in particular believes that Prince Bandar bin Sultan stands indirectly behind the bombings in recent months targeting Beirut’s southern suburbs, one of Hezbollah's strongholds. Salafist extremists have claimed responsibility for these attacks, justifying them as in response to Hezbollah’s role in the Syrian war on the side of the regime.

In countering the Saudi campaign, which has included participation by members of the Lebanese March 14 political alliance, a Hezbollah rival, the Party of God has relentlessly justified its military presence in Syria as part of a preemptive war to thwart tens of thousands of extremist Islamists from reaching the Syrian-Lebanese border. According to Hezbollah's theory, after reaching the border, they would transform Lebanon into another Iraq, where extremist terrorist violence is widespread. In turn, the March 14 alliance and Gulf states maintain that the bombings suffered by Lebanon are a "normal" reaction by Salafist factions fighting in Syria against Hezbollah’s participation there on behalf of the regime.

This political debate now resembles the equally futile question of “what came first? The chicken or the egg?” In parallel, concern in Lebanon is increasing that the war between Salafists and Hezbollah might expand to mirror the current Sunni-Shiite strife that daily reaps countless lives in Iraq, with each side targeting the other with reciprocal bombings.

Hopes to put an end to the downward spiral toward strife currently revolve around a possible Iranian-Saudi rapprochement. But even this glimmer of hope is the subject of great doubt, at least from the perspective of a Hezbollah source who spoke to Al-Monitor on condition of anonymity and noted that the dossier on Iranian-Saudi dialogue was thorny. The source added that even if Iranian Foreign Minister Mohammad Javad Zarif were to succeed in securing a visit Saudi Arabia, his discussions there would not guarantee a halt to the deteriorating relations between the two countries because Tehran rejects Riyadh’s desire to see Assad removed from power.

Furthermore, Iran will not stop supporting Hezbollah in Lebanon, despite the Saudis' desire to see the party reined in as a condition of any possible settlement between them.