Lebanon’s unique position in the Arab Levant means it has been inevitably caught up in the back and forth of Iran and Saudi Arabia’s proxy war in the region. 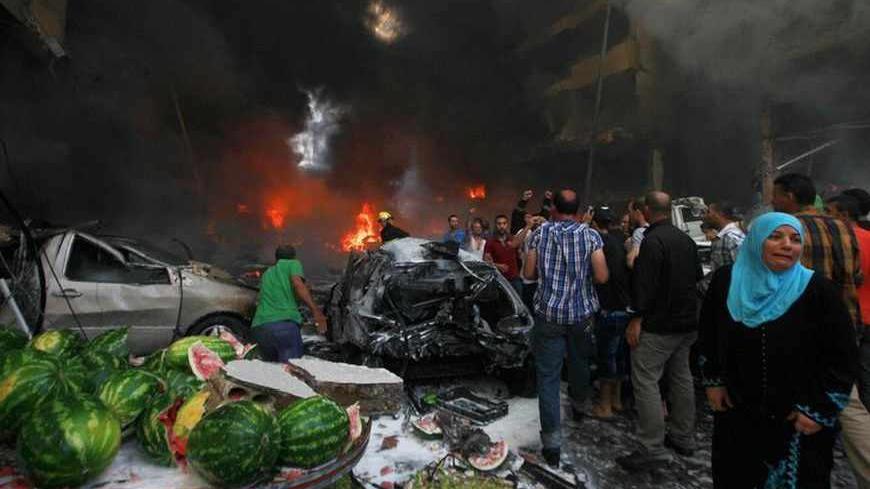 A woman cries at the site of an explosion in Beirut's southern suburbs, Aug. 15, 2013. - REUTERS/Mahmoud Kheir

Lebanese officials are holding their breath in worried anticipation of what might befall their country in the near future. The security and political situations already suggest that this small country may not be able to safely skirt the repercussions of events engulfing the region. It is now believed that Lebanon is not only being buffeted by the Syrian crisis, but also by the sectarian fighting in Iraq, which itself is now connected to events in Syria. The country is also being affected by the sometimes discreet, oftentimes open, and always wide-ranging tug-of-war between Saudi Arabia and Iran.

A new conviction seems also to be making its way through the corridors of political power in Lebanon, according to which the country will not succeed in averting a fall into the looming precipice — unless an Iranian-Saudi agreement were to be reached in this regard. Current political realities do not, however, point to such an eventuality in the near term, as the Iranian-Saudi conflict appears to be at a peak, with international and regional circumstances colluding to prolong it.

The conflict’s most dangerous aspect, as far as Lebanon is concerned, revolves around Tehran and Riyadh both having chosen, so it seems, to use the Levant as their battleground, while they endeavor to safeguard the Gulf from the repercussions there. Any damage to Gulf security will directly affect their domestic situations at the geopolitical, security and economic levels.

The chronicles of the conflict in the Levant — from Iraq across Syria and Lebanon to Palestine — confirm that both the Saudis and Iranians are immersed in a cold war-style confrontation. In Iraq, for example, the Saudis are encouraging the Sunni community to rise up against the government led by Prime Minister Nouri al-Maliki, an Iranian ally. In the meantime, the Iranian Revolutionary Guard is backing Maliki’s war against his opponents in Iraq’s Sunni triangle.

In Syria, Iran’s support and arming of President Bashar al-Assad’s regime is equaled in intensity by Saudi Arabia’s sponsorship of the Syrian Sunni opposition, composed of an amalgam of Salafists and defecting officers who have joined the Free Syrian Army (FSA), the most prominent among the defectors being its chief of staff, Gen. Salim Idriss.

In Lebanon, Saudi Arabia has also decided to unequivocally declare its animosity toward Hezbollah, viewing it as Iran’s most important strategic ally in the Levant. With Hezbollah undertaking the currently most dangerous proxy mission for Iran — namely, bolstering Assad’s regime against Syrian opposition forces and the will of the Sunni Gulf states — Saudi Arabia has decided to treat the organization as an “enemy” and one of Riyadh's most prominent targets in its Levant war with Iran. The Saudis have now adopted a strategy in Lebanon of isolating Hezbollah internally, as well as increasing pressure on the party to force it out of Syria.

On the Palestinian front, Iran, in its confrontation with Riyadh and Washington, holds two cards: Hamas and Islamic Jihad. Following the Syrian crisis, Hamas’ bias toward the opposition there transformed it into a dubious ally as far as Iran was concerned. Nevertheless, in time, Tehran chose not to terminate its relationship with the movement and continues to carefully work toward establishing a new form of alliance with Hamas unaffected by their disagreement over Syria.

Iran would have never accepted this turn of events if it were not keen on maintaining a Palestinian card with which to put pressure on Riyadh and Washington, both of which are striving for a successful outcome to the latest negotiations between the Palestinians and Israelis, without the participation of Hamas. The Iranians hope to bring Hamas back into the fold by exploiting its sense of feeling of isolation as a result of Mohammed Morsi’s fall in Egypt, Saudi Arabia’s confirmed “political jihad” against the Muslim Brotherhood across the region and Hamas’ exclusion from the Palestinian-Israeli negotiations. In this regard, Iran has achieved limited — albeit adequate — success, which it exploits to demonstrate that it still has an important say in Palestinian affairs.

The Iranian-Saudi cold war is expected to rage for a long time still, with the Arab Levant as their battleground. Lebanon's internal fortitude has begun to show signs of not being able to withstand the consequences.