Israel’s foreign minister: 'We welcomed the agreement with Syria' 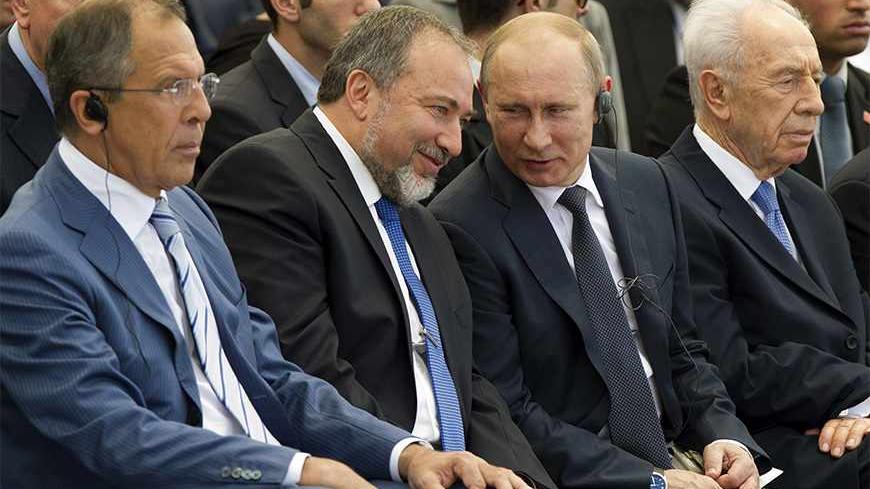 For more than a year, Israel’s Ministry of Foreign Affairs waited for the return of Avigdor Liberman. Both sides — the minister who suspended himself after being pressed with criminal charges and the ministry run by Prime Minister Benjamin Netanyahu and later by Deputy Foreign Minister Zeev Elkin during Liberman’s absence — exemplified great patience.

Both sides suffered quite a bit during that period. Liberman fought tooth and nail for his political life, consoling himself with the prestigious position of chairman of the Knesset's Foreign Affairs and Defense Committee. He missed the powerful position that he had managed to use as a leverage, profoundly and significantly changing his image throughout diplomatic parlors across the globe. On the other hand, the Foreign Ministry was losing its relevance. Through salami slicing, many of its purviews and functions were stripped away. Netanyahu was not really interested in what was going on there, and Elkin — who had taken office only 10 months earlier — was unable to preserve the little that was left, demonstrating poor performance.

Liberman’s return to the Foreign Ministry on Nov. 12 heralded the reunion between two lovers who had been separated by brute force. Liberman was moved to see that even the pen he had left behind on his desk remained untouched. Senior ministry officials who have high regard for him, his management skills and his ability to exercise power received him with open arms, expressing hope that he would reinstate the ministry’s former glory, purviews, influence and relevance.

On Dec. 2, Liberman traveled with Netanyahu for a work visit to Rome. From there, he took off for Washington, where he will spend this week meeting with senior administration officials, including US Secretary of State John Kerry. From Washington he will dash to Moscow, a trip that is no coincidence. Liberman gingerly straddles these two capitals.

Mentally and emotionally, Liberman's heart belongs to Moscow. Soviet-born, he spent his formative years in Kishinev during the days of the Soviet Union, before immigrating to Israel at age 20. He thinks, plans, counts and dreams in Russian. Yet, he has learned to appreciate the United States. In many ways, what happened to him is what happened back in the day to former Prime Minister Ariel Sharon who was regarded a pariah in Washington in the wake of the First Lebanon War (1982), almost like Fidel Castro after the Bay of Pigs Invasion. When he became prime minister, Sharon negotiated himself to the right of President George W. Bush, becoming the staunchest supporter of the United States and its global influence. He forged a strategic alliance with the White House and was adequately rewarded in return.

Liberman is not there yet, but he knows on which side the bread is buttered. He is also trying to set up, with modest success, a personal strategic channel for engaging in a dialogue with the US administration after having been considered by Washington a “non-partner” for a very long time.

In an interview with Al-Monitor, Liberman addressed the US-Russia-Israel strategic triad against the backdrop of the Al-Monitor Conference that is taking place this week in Washington and is dedicated to this topic.

“What’s clear,” says the Israeli foreign minister, “is that right now the level of coordination between Russia and the United States is increasing — on Syrian and Iranian issues alike.”

I asked him if it is good for Israel. He took some time to reply: “Occasionally, it works in the interest of the matter. This particular rapprochement between Washington and Moscow helps to resolve tough issues while using relatively easy ways. This is the case with Syria. Regrettably, sometimes this is not always so, as in the Iranian case.”

It's no secret that Israel welcomed the agreement championed by the Russians for dismantling Syria’s chemical weapons. This is an agreement which is being implemented these days and is perceived to be a strategic success, mainly for Russian President Vladimir Putin but also for US President Barack Obama, who threatened to use force but ultimately achieved his goal.

As for the Iranian issue, Israel spearheads a raucous and vocal opposition. “Coordination between the two powers has become more dominant,” says Liberman. “What is important is that this coordination helps both countries to reach practical solutions, while playing down the fact that they do not see eye to eye on all issues.” He sharpens the point: “In Syria, for example, the Americans and the Russians do not hold the same opinion of Syrian President Bashar al-Assad and his fate. However, putting this dispute aside, they focused on resolving the issue of the chemical weapons. And it worked.”

It’s not that Liberman thinks that we can rest on our laurels and that from now on the two powers will work in harmony. “Clearly, the competition between the United States and Russia continues. There’s no doubt about that. We’re talking about two powers that need to preserve their strategic interests. We can see this competition most prominently in Egypt nowadays,” Liberman adds. “The visit of the Russian foreign minister and defense minister to Cairo clearly demonstrates that. In light of the crisis between Cairo and Washington, the Russians want to renew their influence in Egypt and take advantage of the vacuum that was created there. This is how the world operates, and the same holds true in diplomacy. We should take it in stride,” the Israeli foreign minister opines. “What is important is that Russia and the United States know how to continue the historical and traditional competition between them, but at the same time espouse productive cooperation. These two things can coexist. It’s only natural for the Russians to want to have a bigger foothold and have more influence wherever it is possible, particularly in places where the United States is growing weaker and its influence is waning. On the other hand, there are crises that can be effectively resolved only through cooperation, and we need to be happy that Putin and Obama are able to do this as well.”

Liberman refers to another volatile playground where the two powers are also jostling for more clout: “The Ukraine,” he says, “is another example. The Russians were able to throw a wrench into a deal that had already been clinched between the Ukraine and the European Union with the backing of the United States. At this very moment, we’re seeing the battle, which has turned into an internal Ukrainian struggle and a domestic political crisis.”

Liberman has no clue as to how the dispute in the Ukraine will unfold in light of the mass demonstrations against the rapprochement vis-a-vis Russia that is advocated by the incumbent president, and in favor of further rapprochement vis-a-vis the West. Yet, without knowing the outcome, he encourages “this special dance of continuing the competition over powerful positions and clout, while cooperating in areas where this is needed and can be effective. This is the effective and dominant modus operandi in today’s global politics,” he says. “We need to be pleased that Putin and Obama have found the formula to maintain this dance without having it escalate into strategic crises. They have had the good sense of cooperating in many spheres where such cooperation is called for, while continually testing each other, finding mutual weaknesses or vulnerabilities and continuing the competition. This is like the market forces in the economic sphere. That’s the kind of reality we need to adapt to.”

I asked Liberman where Israel is situated in this powerful equation and what it needs to do in light of its long-standing alliance with the United States on the one hand and the mounting Russian influence in the region, especially in connection with Syria and Iran, on the other hand.

“We’re trying to adapt to the circumstances while upholding our own strategic interests. This is precisely the reason why I’m heading now to Washington and then Moscow. Russia is a factor to be reckoned with in the region, whereas the United States is our greatest friend and strategic asset,” he says.

Liberman got into hot water on the day he resumed the position of foreign minister. He was thought to have criticized US policy when he said at a reception in his honor that Israel needed to “find other allies, too.” In the days that followed, he explained what he had meant. It seems that he did not want to jab the Americans; quite the contrary. He was aiming at Israelis or perhaps even at Netanyahu.

“The United States has many problems, both domestic and global. Israel is not its only child. We must not act as if we are the be-all and end-all, as if the Americans need only to take us into consideration,” he explains. In Libermanese, it sounds an all-clear siren and also a broad hint at Netanyahu’s alarmist approach that keeps spewing left, right and center umbrage and doomsday prophecies and his own sense of being offended, regarding the interim agreement between the world powers and Iran.

According to Liberman, he is trying to pacify, bring calm and put things in proportion instead of panicking. “We welcomed the agreement with Syria,” he states, “because it was a good one. In the setting of this agreement, the Syrians are giving up all their infrastructures, all their chemical weapons and all their future production capabilities of such weapons. The agreement is very clear and concrete, dismantling Syria of its chemical capabilities. Period. Unfortunately, the agreement with Iran does not contain these elements. Iran maintains its capabilities. It gives up very little of what it has achieved, preserving its capability to break out toward its first nuclear bomb within a matter of months. It’s possible that this agreement was achieved through a conjuncture of Russian and US interests, but to our mind it does not coincide with Israel’s interests and position.”

Liberman would not elaborate beyond that. However, if you now listen closely to Netanyahu, he keeps reiterating — almost on a daily basis — that Israel will not allow Iran to acquire nuclear capability, and if it has to do the work on its own, so be it.

In recent days, Netanyahu has come under scathing criticism from different directions. Former Prime Minister Ehud Olmert stated on Dec. 1 that Netanyahu was causing strategic damage to the alliance with the United States, declaring, in fact, war on Washington. And who will come to our rescue, Olmert asked sarcastically. Putin? What will we do without Obama? On Dec. 2, he was joined by Finance Minister Yair Lapid who told CNBC, albeit more tactfully, that problems in the family should be solved within the family and not in public.

Netanyahu was unperturbed by this criticism, continuing with his routine. He compared today’s situation to that of the leaders of American Jewry during World War II who, instead of raising hell to save Europe’s Jews, appealed to President Franklin Roosevelt in hushed backroom talks.

And what about Liberman? He is somewhere in the middle between the sparring sides. On the one hand, he, too, believes that the Geneva deal is a bad one. On the other hand, he is a practical man. He is better at doing things than talking about them. He would rather tell the Americans what is on his mind inside the room. At least for now.