The AKP’s inability to provide accounts of its spending from the previous year generates uproar in Turkey’s parliament, raising questions on the legitimacy of the 2014 budget. 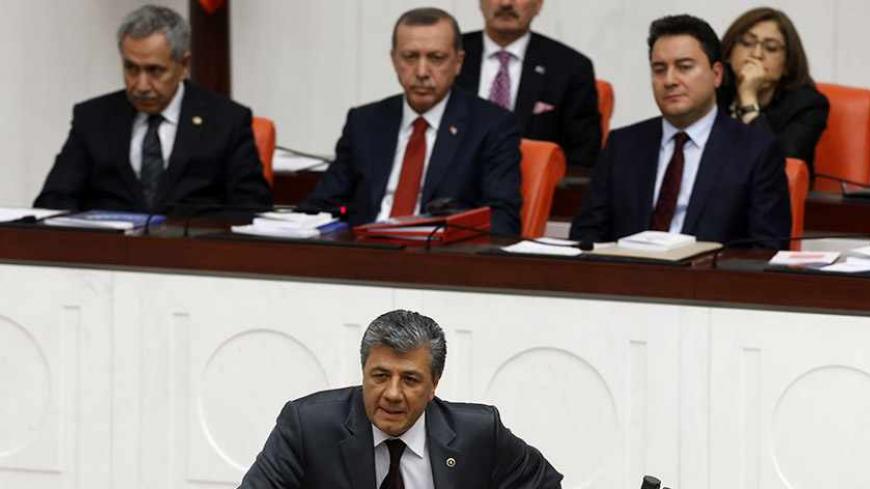 Turkey’s ruling party AKP (Justice and Development Party) prefers to be referred as the AK Party rather than AKP.

This goes against the norm.

We do not say CH Party (CHP, the Republican People’s Party, the main opposition party) or MH Party (MHP, Nationalist Movement Party). Ak means white, pure, in Turkish, symbolizing mother’s milk, honesty, goodness, trustworthiness. All these were AKP’s promises. In the early 2000s, Turkey was recuperating from a devastating financial crisis and the coalition governments of the 1990s were notorious for large-scale corruption. AKP provided an honest newcomer profile with an Islamic touch. Several rumors of corruption broke even in the early years of AKP. Turkish Prime Minister Recep Tayyip Erdogan and his family’s wealth were also an unpleasant subtitle of Wikileaks. When asked about his newly accumulated personal and family wealth, Erdogan’s usual answer has been, "Do not be jealous: Work hard and you can be successful, too."

On Dec. 10, budget talks started in the Turkish Parliament. Erdogan’s hourlong speech had little to say about government spending. His speech was disturbed several times by angry voices from the opposition. The opposition was in unison about the lack of auditors’ reports.

Erdogan cares deeply about the "keeping up appearances" and reportedly has asked his ministers to "handle the Sayistay (Court of Accounts) issue" so that the public should not be presented an image of "government lacking accountability." Erdogan is wise to be worried, since the issue of corruption is quite serious. However, in this instance, the matter is not just "corruption" but beyond. There is deep suspicion of corruption on multiple levels, but no one can prove it because there is pretty much no available data about how the government funds are spent.

The system is designed to work as follows: Sayistay prepares annual audit reports of all public resources and spending. The reports also include expert views about the ethics and accuracy of accounting and how lucrative the investments have been. These reports are then submitted to the members of the parliament. Until this point it all seems "normal." AKP has been praised for its struggle early on to assert civilian oversight on military spending; however, in 2012 a new law was accepted by the AKP-majority Turkish parliament. This change crippled much of the investigative powers of Sayistay as well as its independence. So much so that the Constitutional Court vetoed several aspects of this new law, concluding this was against the "separation of powers." I was perplexed by the news of "not having an adequately explained expense statement from the previous year."  Literally, the government institutions have not provided a line-by-line description of their resources, spending or assets from the previous year.

A columnist for the Turkish daily Radikal, Ugur Gurses, who recently interviewed Finance Minister Mehmet Simsek, told Al-Monitor, "I do find the explanation of lack of infrastructure to produce complete reports by the government less than satisfactory. Rather, what we observe is an attitude of 'If I have the majority in the parliament, then all my actions are right and justifiable.'"

Considering the approaching local elections (scheduled for March 2014) and the harsh criticism AKP has faced from Gezi protesters as well as from the Gulen movement in the last six months, one might have expected impeccable record keeping on finances that would make AKP "come clean" in public. More intriguingly, the overwhelming majority of Sayistay members were appointed by the AKP government itself.

CHP Vice President Umut Oran told Al-Monitor, "First, the State Auditing Board was shut down in 2010, and it was "combined" with Sayistay, and now Sayistay’s audit reports are not available." Kemal Kilicdaroglu, CHP’s leader, has explained during his budget speech to the parliament on Dec. 10, that in 2011 when Sayistay told them they were not ready to provide reports, Kilicdaroglu had agreed to wait. In 2012, there still were no reports from Sayistay. Kilicdaroglu explained that CHP had asked officially several times to have access to the information (132 reports prepared by Sayistay in 2012) with no success. This year, Sayistay sent reports, but they had been decimated — from hundreds of pages to a mere 10 pages. Worse than that, at the end of the document, Sayistay noted that it was unable to provide advisory opinions because it could not obtain information from the respective institutions.

Sinan Ogan, a parliament member from MHP, told Al-Monitor that MHP has also asked the government to provide complete expenditure reports. Ogan added that because AKP has the majority in parliament, the opposition’s questions frequently go unanswered. Ogan also told Al-Monitor that this is not the first time opposition parties have brought the contested issue of Sayistay before the parliament. Hundreds of pages in the parliament archives prove him correct. The same punch line is repeated in all: "The AKP prevents the Turkish parliament’s right to oversight. We are asked to approve next year’s budget without having access to information about what has been done in the previous year," Ogan said. "Even when we provide full evidence of corruption, the government does not reply to us, and does not act upon them, so we cannot help but think the government is a part of this."

The co-vice president of HDP (People’s Democratic Party), Ozgur Muftuoglu, provided Al-Monitor with a detailed analysis of the proposed 2014 budget exemplifying how the "big-ticket" items have failed to represent the public’s needs. As spending on health care and education decreased, the Directorate of Religious Affairs budget has grown 20 times during AKP’s reign and its budget alone surpasses 11 ministries' budgets combined. Muftuoglu also highlighted an important point, that AKP has increased the defense budget while Turkey was going through serious peace talks with the Kurds. In particular, the budget for prisons, police services and intelligence agencies has grown. Muftuoglu asked (in a sarcastic manner), "Is AKP getting ready to declare war on its own people?"

Hasip Kaplan, a parliament member from BDP (Peace and Democracy Party) gave a rather entertaining budget speech at the parliament. After explaining the increasing amounts of spending for "security," Kaplan asked: "For the love of God, I plead with you: Is it not our right to know how much it costs to gas, torture, water-cannon our own people at the Gezi Park protests?"

All opposition parties have voiced harsh criticism to the lack of audit reports and accused AKP of reckless spending as well as deep corruption and nepotism. Political opposition in Turkey, despite all its challenges, remains vocal and vibrant, yet it is indeed powerless. Its minimal power of oversight is curtailed further as the executive branch usurps the legislative powers. While the opposition was complaining about the lack of audit reports, AKP passed a new regulation about Sayistay that allows government institutions three years to provide information about their spending to the auditors. It simply means that until 2016, AKP is not legally bound to explain how it spends public funds.

This mind-boggling attitude is acutely visible in the odd experience Umut Oran shared with Al-Monitor. CHP designed posters to raise public awareness about the lack of accountability. These posters were censored by Stroer Kentvizyon, the advertising company, which told CHP, "You are criticizing the prime minister too harshly." 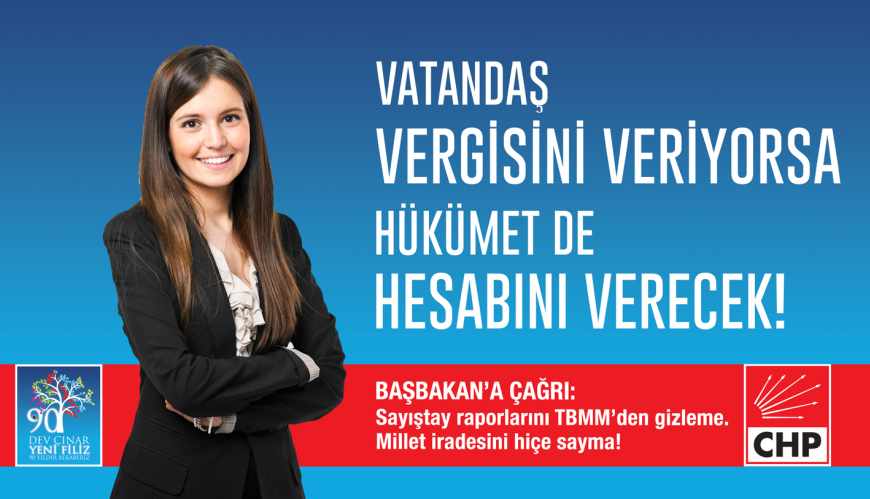 The posters all state this line: "If the citizen is paying taxes, then the government should give an account of its spending," and, "A call to the prime minister: Do not hide Sayistay’s reports from the parliament. Do not ignore the national will!"

Now we ask, if a government is not accountable on its financial matters, is it still a legitimate government?