Turkey backing off support for jihadists on Syria border 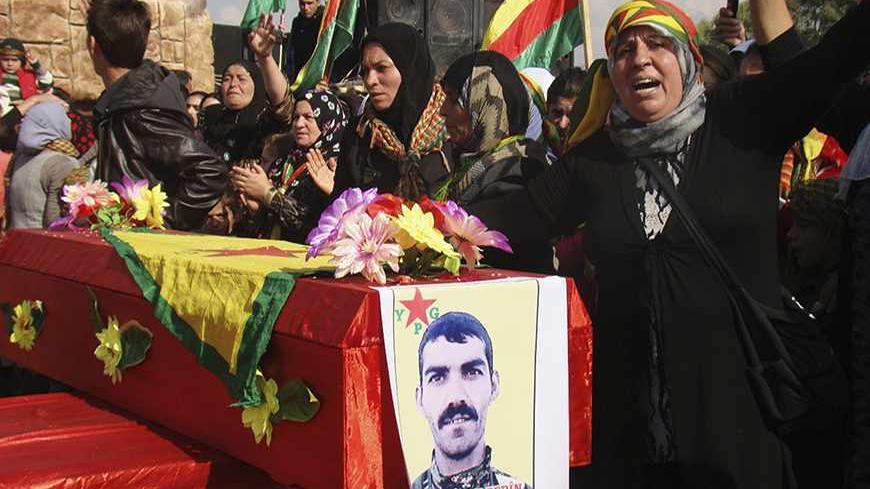 TOPCU, Turkey — The dull thud of a mortar shell, the crackle of gunfire — these are the sounds of daily life in this remote village on the Turkish Syrian border. “Look,” said Abdulkadir Isikdogan, a local youth gesturing toward shattered window panes and pockmarked walls. “Sometimes, the bullets hit us as well; we are lucky to have escaped unscathed.”

Topcu, on the Turkish side of the border, is on the front line of a vicious turf war between the Syrian Kurdish People’s Protection Units (YPG) and Salafist groups led by Jabhat al-Nusra, the Islamic State of Iraq and al-Sham (ISIS) and Ahrar al-Sham. The battle, which has Topcu caught in its crosshairs, is over a village called Susik that keeps switching hands.

Over the past weeks, the YPG has been making big gains, capturing more than a dozen villages and the much-coveted Til Kocher (Yaroubiya) border crossing to Iraq. On Nov. 11, the Salafists retaliated with a remotely controlled bomb that was detonated in front of the Kurdish Red Crescent headquarters in Kobani. At least 14 civilians, including several children, were killed.

But the YPG appears to be retaining the upper hand and is said to be eyeing Tal Abyad, which lies east of Susik and Kobani.

Tal Abyad is a strategic prize because it marks the start of a mainly Arab-populated belt running south to Raqqa. Should the Kurds punch through it, this would give them control over an uninterrupted stretch of land running from the Iraqi border to Kobani, and thus paving the way for Kurdish autonomy.

Salih Muslim, the co-chairman of the Democratic Unity Party (PYD), the Syrian Kurdish group that is running the Kurdish-controlled areas, acknowledged in an interview with Al-Monitor that the YPG’s recent success stemmed in part from an easing of Turkish support for the Salafist groups because of “pressure from the West and especially from Washington.”

Over the past month, the international media has been awash with reports of rebel fighters crossing into Syria from Turkey and their wounded being treated in Turkish hospitals along the Syrian border. This state of affairs is nothing new. But as Sefik Cirkin, a Turkish lawmaker for the Nationalist Action Party who is from the border town of Reyhanli, observed: “It’s only after the Salafists took over the border crossings and that the Obama administration took fright that the Western media decided to report on Turkey’s support for extremist groups.”

Cirkin, who spends considerable time poking around the Syrian border, agrees that Turkey has begun to scale back its support for groups like Jabhat al-Nusra. And like Muslim, he believes pressure from the Obama administration played a big part. Turkey’s Prime Minister Recep Tayyip Erdogan has kept up his calls for the ouster of Syria’s President Bashar al-Assad. Yet, he also has begun to denounce al-Qaeda atrocities, saying they “sully the name of Islam.”

There are encouraging signs that Erdogan’s words are being matched with action. Suspected al-Qaeda operatives have been detained in a series of raids in Istanbul, Adana and elsewhere across the country. A truck carrying 1,200 rockets destined for the rebels was intercepted this month.

Turkey’s fading support for the jihadists is palpable along the border. When I traveled in September to Akcakale, a mainly Arab town that faces Tal Abyad, locals were brimming with enthusiasm for the Syrian “jihad.” Yasin Dogan, a local shopkeeper who ran a volunteer ambulance service for wounded rebel fighters, boasted that he could go in and out of Syria as he pleased. “A phone call to the kaymakam (local prefect) or the intel guys and we’re in. Want to come on a run?” I had spurned his offer but decided to take him up on it this time only to discover that he had sold his ambulance. When I asked him why, Dogan hung his head. “You know ...,” he mumbled, his voice trailing. What about the intelligence people, they might get us through? Dogan obligingly called one of his contacts who agreed to meet us at the border gate. “Put this on,” Dogan barked, handing me a purple headscarf.

The official working for Turkey’s national spy agency MIT, proved to be a Kurd posing as an Arab. “Things are getting really dicey between our boys and the PYD. We can’t let you through,” he said. Were wounded fighters still being ferried to hospitals in Urfa? No, they are being treated in a new hospital that had just opened on the Syrian side. Was the PYD going to make a push for Tal Abyad. “It could happen any moment.” And was Turkey going to help the Salafists hold them at bay? “It’s not our business, they can fight it out.” Dogan made no effort to hide his disgust. “Come on, we are going to see the commander,” he said.

Our next stop was a small, two-story house not far from the border gate. A tall, bearded man greeted us at the door. He was a major who had defected from the Syrian army a year ago to join Ahrar al-Sham. He refused to give me his name. Dogan insisted in hushed tones that our host was “very senior, very important.” Was Turkey helping with the resistance? “They give us moral support; Allah bless Turkey,” the man replied. But the battle against Assad was being “sabotaged by America, Russia, Iran and Israel.” He added, “They want to force us to go to Geneva II and shake the bloodstained hand of the dictator dog. Never!”

The former major was far more interested in discussing the humanitarian crisis in Syria. “Our people are starving. Children, women and the elderly, they are eating leaves, grass, donkeys and rats to survive. There is no milk for babies. Not a drop. Write this,” he pleaded.

Queried about the rebels’ recent string of defeats against the YPG, the Ahrar al-Sham commander insisted that his group had “nothing against the Kurds.” Their quarrel was with the YPG, which he claimed was fighting on the side of the Assad regime. “Assad and [Iraqi Prime Minister Nouri al-] Maliki are helping them against us. Iraq gave them 42 tanks.” The PYD denies all such claims. Western officials who monitor the war and asked not to be identified by name said they had no information to substantiate the claims that Iraq was helping the PYD.

A look at al-Nusra’s Turkish-language website offers clues about how the fight is going. The last video to chronicle the “big blow” delivered by Jabhat al-Nusra against the Kurds dates from August. PYD leader Muslim does not rule out an offensive against Tal Abyad. Turkey’s likely reaction must surely figure in the YPG’s plans. But first the battle for Susik — currently in Jabhat al-Nusra’s hands — needs to be won.

Back in Topcu, few care which side prevails. “All we want is for this horrible war to be over,” said Isikdogan.

Turkish Foreign Minister Ahmet Davutoglu vehemently denied accusations that Turkey had facilitated the entrance of extremists into Syria. Responding to a question from Al-Monitor at an otherwise off-record session on Monday night before leaving Washington following talks with senior US officials, Davutoglu said the foreign fighters come primarily from other countries, including Iraq, where he said "hundreds of terrorists" escaped from Abu Ghraib prison last spring.

The Turkish minister conceded, however, that "no country can control a 900-kilometer-long border 24 hours" and said that closing the border would exacerbate the humanitarian plight of Turkish refugees. He also complained that countries that accuse Turkey of allowing foreign fighters to join the jihadists fail to prevent them from leaving their homes and do not provide names in advance so they can be apprehended at Istanbul airport.  "On what basis should we stop them?" Davutoglu asked. "Turkey is receiving 34 million tourists. Should we say, 'you have a beard, you may be a terrorist?'"