A first-hand account of Turkey’s Syrian border suggests that Turkey continues to provide sanctuary for both rebels fighting the Syrian government and Kurdish forces alike. 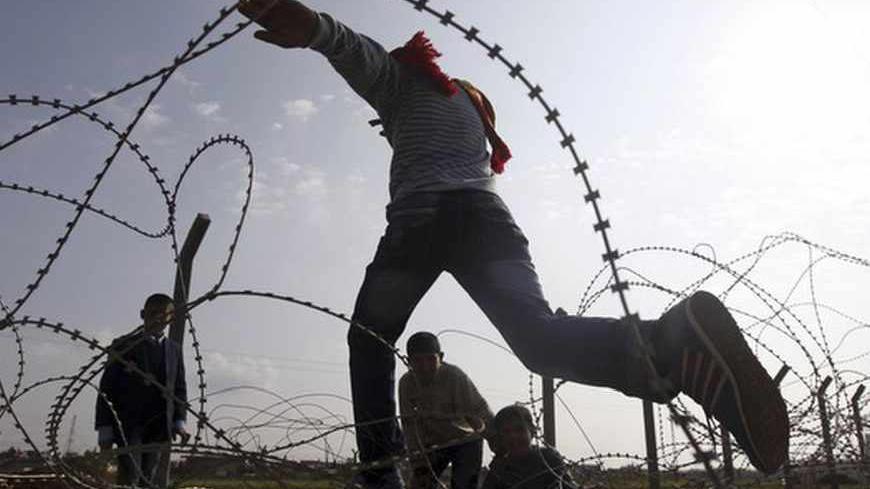 Syrian boys attempt to cross the border back into Syria at the Turkish border town of Ceylanpinar, Sanliurfa province, Nov. 24, 2012. - REUTERS/Amr Abdallah Dalsh

CEYLANPINAR, Turkey — Last week, I traveled to Turkey’s border with Syria. I was planning to cross into the Kurdish-controlled northeast to find out how the country’s most influential Kurdish group, the Democratic Unity Party (PYD), was running the string of towns and villages that fell under its control last summer.

I would have to cross into Syria illegally because Turkey’s formal border crossings with the Kurdish region remain sealed. My destination was the PYD-controlled town of Ras al-Ain, or Serekaniye in Kurdish, that stands opposite Ceylanpinar on the Turkish side. Colleagues who had used smuggler routes to get in assured me that I would sail through. But when I arrived in Ceylanpinar, I learned that the trip across included wiggling my way through barbed-wire fencing and risking being spotted by trigger-happy Turkish border guards. I dropped the idea, deciding instead to investigate widespread claims that Turkey is propping up Syrian rebels in a little-reported proxy war against the PYD.

The PYD is the Syrian franchise of the Kurdistan Workers Party, the rebel group known as the PKK that has been fighting on and off since 1984 for Kurdish autonomy inside Turkey. It is, therefore, not surprising that Turkey is nervous about the PYD’s gains.

I started off in Ceylanpinar, a shabby, nondescript town with a mixed population of Arabs and Kurds. Before Syria’s civil war erupted, Ceylanpinar was best known for a gigantic farming complex called TIGEM and its free-roaming herds of gazelles. These days, Ceylanpinar is making headlines with horror stories of locals being wounded by stray bullets and shells fired from Syria. At least four residents have died since fighting broke out in November between Syrian rebel forces and the PYD’s armed wing, known as the People’s Defense Units, or YPG.

In July, YPG forces expelled the rebels from Serekaniye. But clashes continue over the neighboring hilltop village of Tel Halef, which is controlled by the rebels. Tel Halef is a strategic prize because it cuts off the mainly Kurdish towns of Afrin and Kobani from the long stretch of Kurdish-controlled territory lying east of Serekaniye.

My first stop was a government-run hostel that offers one of the clearest views of Syria. YPG fighters could be easily spotted along the rusting railroad tracks that demarcate the border. A small flag emblazoned with the insignia of the Kurdish Supreme Council, which notionally unites Syria’s rival Kurdish parties, fluttered above a wheat silo where a huge YPG banner used to stand. In July, the YPG flag vanished. PYD leader Saleh Muslim, who was invited to Turkey last month, said it was removed to appease his Turkish hosts.

In Ceylanpinar, the word around town was that a fresh batch of wounded rebels had been secretly ferried from the TIGEM compound to the nearest state-run hospitals. A security guard who works at a sprawling refugee camp housed within the TIGEM grounds claimed that the camp doubled up as a “base for the rebels.” He said he had “witnessed with my own eyes” a group of 40 rebel fighters cross over from the camp to Tel Halef.

“It was around a month ago, I was told by the gendarmerie to shut up about it.” He had also seen wounded fighters being brought in. He reckoned they were taken to the provincial capital Urfa. The Turkish government dismisses all such claims.

Before leaving Ceylanpinar, I stopped by the local mayor’s office. A balding former lawyer with a weary smile, Ismail Arslan was elected on the ticket of Turkey’s biggest pro-Kurdish party, Peace and Democracy.

“Our nerves are shattered,” he said. “The entire town lives in fear of death.” Arslan’s other worry is simmering tensions between the Kurds and Arabs.

“The battle there,” he said, pointing toward Serekaniye, “is mirrored here.” The mayor repeated the allegations that the rebels were using Ceylanpinar as a rear base from which to attack the PYD. Their presence had become less visible, he added, after the PYD won control of Serekaniye. Instead of being treated at the local hospital, the fighters, many distinguishable by their long, flowing beards, were being farmed out to hospitals in the neighboring towns of Akcakale and Urfa.

Akcakale is largely populated by Arabs, and its border crossing with Syria is manned by the Salafist Ahrar Ar Sham. Akcakale is said to be a key supply line for rebels in Aleppo, Idleb and Homs. The scenes at the border post were chaotic. Hundreds of men, women and children wearing expressions of desperation and fear were piled behind the tall iron gates that opened to Turkey.

A tall, turbaned man in army fatigues barked orders. The din of babies’ screams drowned them out. The man told me his name was Abu Musaab. “Ahrar ar Sham,” he curtly added. He was grateful to Turkey for “all its help,” he said. I was about to ask whether he was talking about weapons. But scenting my intentions, my minder, a former minor official turned businessman who called himself “Muhtar,” hurried me away.

“The war has been good for us,” Muhtar confided. “Look,” he said, gesturing toward a ghastly block of cement-splattered bricks. “That’s going to be my new hotel.” Muhtar already had a thriving business selling used cars to Syria. Ahrar ar Sham, he added, did “a great job” of running things. He said, “They are not thieves, like the others.”

“Oh, you know, FSA [the Free Syrian Army]. They can’t even hold a gun,” he scoffed. I was intrigued, but I had to find my wounded warriors. Muhtar said they came through the Akcakale border almost every day and to go to the hospital. I did, but upon my arrival at the Akcakale state hospital I was informed that the rebels had already come and gone.

“They come here for emergency treatment but are then transferred to Urfa,” a hospital staffer explained.

After an hour’s drive I reached the state hospital in Urfa. In the emergency room, a group of men, some of them in combat gear, were huddled around a young man on a stretcher.

The man was Mohammed Kaheel, a 29-year-old from Homs. Kaheel belonged to the FSA-affiliated Farouq Brigade. His left leg was swathed in bandages. His comrades told me that had been shot by the YPG.

“I am Kurdish, I am from Qamishlo,” volunteered a lightly bearded youth called Mohammed. He told me he was a member of an obscure faction known as Liwa Al Meshal, named after Meshal Temo, a Syrian Kurdish activist who was killed last year, allegedly by regime forces.

Why would a Kurd want to fight against fellow Kurds, I asked. “Because the PYD is on the side of [Syrian President Bashar] al-Assad,” Mohammed asserted.

“The PYD are not Muslims, they are Armenians,” chimed in a short man wearing a white shirt with matching trousers and pointy black shoes. The man, an ethnic Arab from Akcakale, said he ran his own one-man ambulance service for wounded rebels. His name was Yasin Dogan.

“I am on the path of Allah; I do this because I want to go to heaven,” Dogan asserted. He had been doing the run for the past year and had recently been to Tel Halef to carry back fighters injured in the battle against the YPG.

Was the Turkish government helping them? “Not enough,” he snapped. “These poor boys get bounced around like footballs from one hospital to the other.” “Still,” he added quietly, “Turkey is doing what it can.”

Did this include providing weapons? “Turkey gives us weapons like serum, on a drip,” said Mohammed. “France and Saudi Arabia, they give us the best stuff,” he added.

I had found an answer at last.