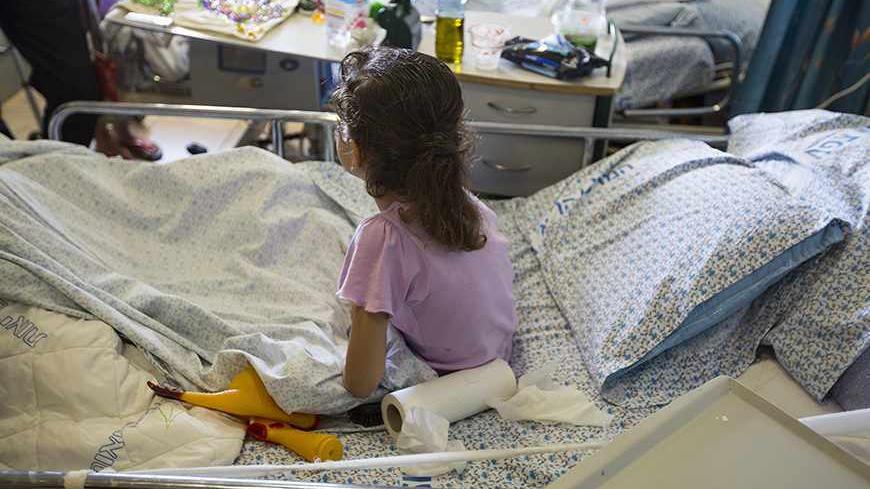 A wounded Syrian girl sits on a hospital bed at Ziv Medical Center in the northern Israeli town of Safed, Sept. 9, 2013. - REUTERS/Baz Ratner

It’s heartwarming to see what is happening in Safed’s Ziv hospital these days. Hundreds of Israelis who heard through the media about the medical treatment it is providing to Syrian civilians and fighters alike, wounded in that country’s civil war, have been appearing in the wards to hand out clothing, food, sweets and flowers. Some are even coming just to cheer up the wounded, who find themselves all alone in the hospital, in a foreign country.

About 300 ailing and wounded Syrians have shown up in hospitals across northern Israel in the past year for lifesaving care. Just last week (Nov. 3) the first Syrian baby was born in Israel. The child’s mother made her way to the border between the two countries while she was in labor. An Israeli Defense Forces patrol picked her up and brought her to the maternity ward in Ziv, where she gave birth to her firstborn son.

“I don’t feel like I’m in an enemy country,” she later told reporters. She explained that she decided to try and give birth in Israel, because there has been no midwife at the local hospital in Syria since the civil war began. That is just one of the medical services that have been sorely lacking there. Like hundreds of other Syrians before her, she has since learned that the face of the enemy is very different from what she imagined. It is very human. People smile and get excited when they hear the cries of her newborn infant.

The injured Syrians are afraid to return home, not only because of the bloody war still going on in their country, or the dearth of basic commodities and the economic crisis there. They are also worried that they will come under attack once word gets out that they were treated in Israel. The have good cause for alarm as well. Just last week, Sudqi al-Makaath, a resident of Majdal Shams, showed up at the hospital. Makaath had been released from prison a year ago after serving 27 years for crimes against state security and collaboration with Syria. He photographed the faces of the wounded being treated in the hospital and posted the pictures to his Facebook page, labeling them “traitors” and “collaborators with the Zionist entity.” To one photo showing a Syrian opposition fighter, he even added the caption, “This is a photograph of a terrorist from Daraa who was taken for medical treatment to occupied Safed.”

The pictures that he posted online received many “shares,” and caused a huge commotion in the Druze villages of the Golan Heights, where residents are split over whether they support or oppose Syrian President Bashar al-Assad. Some locals said that Sudqi al-Makaath does not represent the Druze of the northern Golan Heights, and that his actions are a disgrace. Others, who support the Syrian regime, justified what he did, explaining that he exposed what they describe as “the terrorists who are working together with the Zionist entity.”

There is no way of knowing what Israel will do with the injured patients whose faces were revealed. Nonetheless, all the commotion hasn’t stopped the flow of the people wounded in the civil war from coming to Safed for medical care. Many people around the world admire the Israeli hospital and send it touching letters, faxes, and emails. On the desk of Linda Futterman, director of international relations for the hospital, are dozens of letters from people and organizations alike from around the world, expressing their appreciation for the hospital and congratulating it for its enormous contribution to building a bridge of tolerance and humanity between Israelis and their Syrian neighbors. Some of those letters include cash donations.

Most of the patients are convinced that the treatment that they are receiving there is intended solely for propaganda. They believe that as soon as the journalists and cameras disappear, they will be kicked out and sent packing back to their homes across the border. There can certainly be no doubt that the sight of wounded Syrians from Daraa or Hama wandering the hospital’s corridors among Israeli patients is an unusual spectacle that relays a positive message. But in no way is this propaganda. The compassion shown to the wounded from Syria is real — just like compassion shown to sick children from Gaza and the West Bank, who also happen to be hospitalized in Israel, is very much real.

Israelis who show up at the hospital with gifts and flowers almost daily are not coming because they were instructed to by the Foreign Ministry. They are coming out of a sincere desire to be there, and to show support for the victims of a vicious war that is being waged so close to their homes. At the same time, there is absolutely no doubt that they also want to show the patients that they are not monsters, as they are sometimes depicted around the world. Bridges of coexistence have really been built in Israeli hospitals, and there is good reason to be proud of that. If only those bridges could serve as an example for other places around the world.