Russia's turnaround in the Middle East

Russian foreign policy in the region has benefited from a steady, nonideological focus as well as the missteps and neglect of other powers. 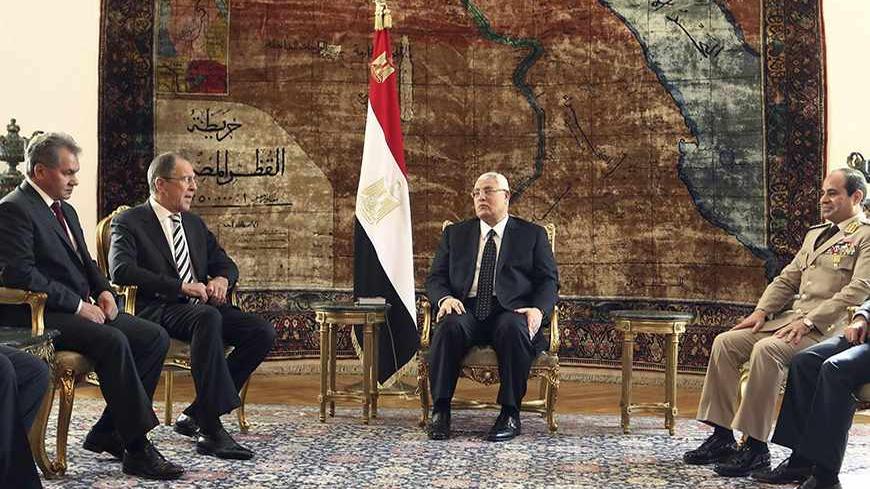 Ukraine has briefly become a Near Eastern country for us. The failure of the European Union's hopes that an agreement on an association between Ukraine and the EU would be signed in Vilnius on Nov. 28 is regarded by all as a success for Russia and Russian President Vladimir Putin, who fiercely fought against Ukraine's “departure” for the West. This success is now viewed against the backdrop of Moscow's active and successful approach in the Near East, and it adds to the feeling of Russia's power and influence in the international arena on the part of many Russian observers. Syria and Ukraine have little in common, except that Russia had been considered an obvious and irreversible “loser” in both places, but it turned out to be — at least for now — the winner.

However, truth be told, there is another parallel. Ukraine is actively being invited into the Customs Union — an association that Moscow is initiating in the territory of the former Soviet Union for the purposes of integration. A couple of weeks ago, Kazakhstan's President Nursultan Nazarbayev said that it would be a good idea to invite Syria and Turkey into this organization so that the project would not look like a restoration of the USSR. But this, of course, was something of a political joke.

In general, Russia is actually becoming a most important participant in all political processes in the Near East. Only in the past few days, Israeli Prime Minister Benjamin Netanyahu and his Turkish counterpart, Recep Tayyip Erdogan, were in Moscow on separate occasions, one after the other. Russian Foreign Minister Sergei Lavrov is participating in the final round of negotiations of the six major powers on Iran. At the same time, Russian diplomats are still trying to break the deadlock in the Syrian Geneva II conference, communicating with Damascus and representatives of the opposition, and continue to work on the destruction of chemical weapons in Syria. On Nov. 14-15, a Russian-Egyptian meeting was held in Cairo in the form of “2+2” (the ministers of defense and foreign affairs), with arms contracts expected as a result of this meeting.

This situation is unexpected. Just several months ago, it was believed that Moscow was hopelessly losing ground in the Near East. The last clients inherited from the Soviet past are losing power in their respective countries, new ones have not developed and Russian policy provokes hostility and rejection from most capitals and religious and ethnic groups in the region.

What is the reason for such a turnaround? We should give credit to the move in respect to chemical weapons, whose elegance was appreciated by all and which is likely to go down in diplomatic history. But we have to recognize that the success of Russia is largely derived from the failure of others. Against the backdrop of a mindless imitation of policy that the EU is pursuing in the Near East and the flip-flopping of the United States (China, as always, is deliberately on the sidelines), Russia looks strong, primarily due to its consistency with respect to Syria and — oddly enough — its slow pace on other issues.

The line of people that is emerging to meet with Russian authorities is not surprising. Few people have liked, or like, Moscow's position on the events in Syria, but it is consistent, and in essence remains unchanged from the beginning. A feeling is forming that Russia knows exactly what it is doing and what it wants — unlike the United States and the rest. And, if real interests are understood, that there is something to agree upon with Russia, then it is possible to move forward on the Syrian issue. In any case, it seems that way. As for other countries that underwent their “spring,” such as Egypt, the lack of haste after the first revolution, for which many reproached Moscow, as well as the restraint after the second revolution, allowed it to avoid the mistakes made by the United States, for example, which cast about between “the sides of history.”

The irony is that Moscow's success in the Near East is something of a side effect. Russia is not the Soviet Union, and it never again will be. So, the panicked arguments in the US press — to the extent that the United States suffers failures and is actually beginning to leave the Near East — Russia will take over this vacant position, are groundless. The Kremlin is simply not pursuing this, and it does not have the resources to play the role of a major patron state. Clearly, no one will refuse additional opportunities in important countries and their markets. But the approach that has been advanced in the region since 2011 is primarily dictated by the desire to protect itself from even larger shocks, which as Moscow believes, are the result of foreign interference in the affairs of the Near East, similar to how it disowned any “collaboration” in the Libyan campaign.

Russia's consent to the operation against former Libyan leader Moammar Gadhafi (or more precisely, its unwillingness to prevent it) was apparently explained by what former President Dmitry Medvedev had assumed: In this way, Moscow could thus distance itself from those not very important to it. It turned out to be the opposite — inactivity deepened the crisis, a precedent was set for an absolutely devastating “humanitarian intervention,” and Russia ended up at the center of mostly hostile attention from all sides.

The Near East proves that the international system is a single, interconnected organism, subject to certain laws. This heterogeneous and volatile region has always been a target for external forces, which also posed as regulators. And when the United States, which had performed this function after the Cold War “declined,” a vacuum emerged, demanding to be filled. Russia refused to have a regulatory role after the collapse of the USSR, limiting itself to protecting its remaining commercial interests. But the logic of international relations pushes Moscow back (since there are no other contenders), in essence, against its own will. And Russia is expected — intentionally or not — to take on the burden of responsibility, in return for some dividends, of course.

This is a heavy burden, and considering the ongoing processes — a thankless and pointless one. Moscow is not ready for this, as it realizes — it is one thing to point out the US' failure and quite another to achieve the necessary result in the Near East. But, on the other hand, it is necessary to justify expectations, and for this reason the stream of visitors to the Russian capital hoping to enlist the support of the Kremlin will not dry up.

What is the reason for the success of Russian diplomacy? As the leading Russian specialist in international affairs Sergei Karaganov notes, it largely plays by the rules established by the geopolitical patterns of the past centuries and the state-centered Westphalian international system. In today's world, nothing is clear, and contradictory processes occur simultaneously: globalization and a return to the role of nation states, the erosion of borders and attempts by governments to control domestic affairs using new methods, the emergence of new forms of force and rapidly growing ungovernability. And in such a world, “Russian diplomacy, preserving and developing mastery, but unencumbered by ideology, feels like a fish in water,” writes Karaganov. “It is guided by values that are associated with an unconditional defense of sovereignty and, arguably, that have been rooted for the past 300 years in the national identity of a great power and the desire to be among the leaders.”

In general, it turns out that a simpler policy that is guided by clear instincts and aspirations, but that at the same time does not pretend to know a universal recipe, seems more effective. This does not bring solutions any closer, but it adds points in the wider political game. A policy that pretends to know the solutions and that is guided by ideological and moral values provides neither one nor the other.