Russia not pursuing Cold War in Mideast over Ukraine

Moscow's interests in the region are unchanged, including collaboration with the United States on elimination of chemical weapons in Syria, despite the crisis over Ukraine. 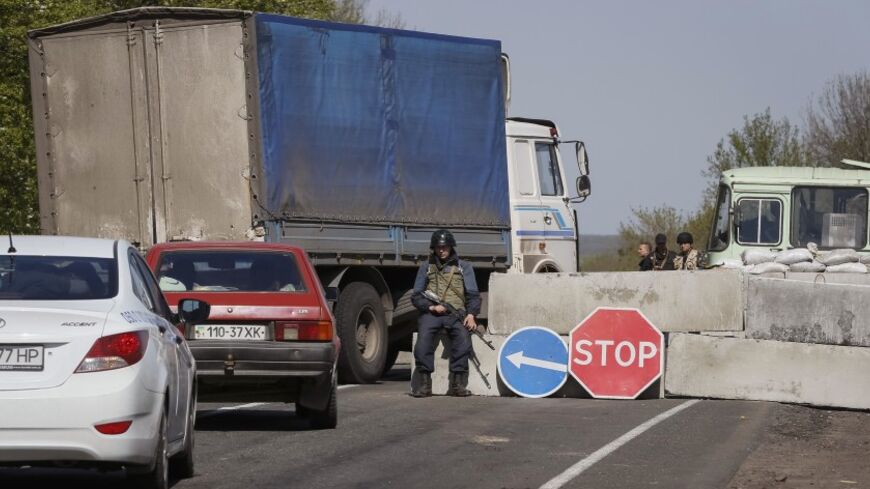 Ukrainian soldiers stand guard at a checkpoint outside the city of Slaviansk, April 27, 2014. Separatist rebels were holding a group of international observers there. - REUTERS/Gleb Garanich

Today it seems there is no concept as popular as that of the Cold War. Once again, in spite of the diversity of the world, the conversation is between only two capitals — Moscow and Washington. Commentators recall terms that would seem to be hopeless anachronisms, first and foremost — nuclear deterrence. At the focus of the confrontation is a large country in the center of Europe, for all purposes already divided into spheres of influence and facing the prospect of officially splitting into two (at a minimum). Deja vu.

And here is how US Secretary of State John Kerry acknowledges that in the Cold War, much was “easier than it is today — simpler is maybe a way to put it.”

The recognized parallels should not lead to false conclusions — the real Cold War, such as it was over the span of four decades of the 20th century, will never be repeated. This is because its main distinguishing characteristic was not the confrontation between the Soviet Union and the United States, but the balance of their military-strategic capacities. The balance of power, affixed by nuclear-missile parity, facilitated a stability in the global system that was unprecedented in the history of international relations.

Even though Russian-US restraint has outlived all changes, in all other respects the balance of power has not remained, nor is spoken of. The very understanding of power has become multifaceted; it has come to include economic, informational, humanitarian and ideological components, and it is understood that Russia and the United States are on the whole very asymmetric. And yet it can be said that at the end of April 2014 Russia and the United States entered into a period of confrontation. This is not an all-embracing deadlock, as was the case 30 years ago, but an antagonistic relationship. Ukraine became the cause of it, but mutual antagonism has long accumulated. Its roots lie in varying — and ever more divergent — views of what took place during the border period of the 1980s and 1990s, and why. And it is from an interpretation of how the Cold War concluded that flows an understanding of present times, and most importantly, desires for the future.

Events develop so quickly that we have not yet taken stock of the change, and out of inertia regard everything as being just one more conflict between the Kremlin and the White House. At the beginning of the 1990s there were very many of them. There was a time when Russia merely showed its “teeth,” even if, because its own weakness, it could not change anything. Then Russia spoke out ever more pointedly, but always leaving a way out so that, having demonstrated its strength, it would concede. In Syria, the step back was not taken on this occasion, but there remained an orientation toward a certain joint control with the Americans. Now this too is gone. The points of view on the part of Russia and the United States on what Ukraine should be are not only counterpoised, they are irreconcilable.

Russia maintains that Ukrainian participation in NATO, which is more than likely in the event of a reinforcement and stabilization of the pro-Western government, poses an unacceptable risk in terms of security. For the United States the issue is not about Ukraine itself, but of Washington's capacity as world leader to achieve the goals that it sets for itself. Robert Gates recently formulated the problem quite precisely — Russia has encroached upon the outcome of the Cold War, upon the world order that was established in 1991. This revisionism needs to be strangled in the cradle; otherwise, the position of the United States begins to crumble across the entire planet.

Put a little more simply, as long as the United States viewed Russia as a headache or an annoying hindrance — even if one not lacking in complexity — it was one that was possible to overcome or disregard. After Ukraine, Washington sees in Russia a rival that must be seriously contained and neutralized.

Knowing Obama's style, one can assume that Moscow will simply disappear from his field of interests. The president has likely already come to the conclusion that nothing can be accomplished in this matter. The joint agenda, which even earlier had been compared to "The Magic Skin," is now reducing itself into separate international conflicts — some of which are in the Near East, in Asia and, of course, in Ukraine. Additionally, these are not matters of regulation, not of resolving contradictions, but — in the best case — of minimizing mutual risks.

All of this takes place against a backdrop of cutting off ties and erecting constraints across the board. Further, this is does not represent a conscious decision aimed at achieving a specific goal. Today's containment, in contrast to that of the second half of the previous century, is not a policy, but a renunciation of one. It is a desire to reduce the scale of an unsolved problem through the establishment of maximally unfavorable conditions for its source.

Russia has become the personification of that part of the global community that does not factor Washington's opinion into decisions that are important to them. Sanctions — declared or undeclared — will broaden. The Russian-US confrontation ceased some 20-plus years ago, not because its participants recognized its needlessness, but because Moscow ceased to be a party to it, lost its characteristics of being a rival of Washington. When it began to one extent or another to restore them, a relapse took place.

And what about Moscow? Is it prepared for a full-scale Cold War? For instance, it would be logical to assume that on account of Ukraine, Russia will proceed to counter Washington throughout the global arena. If there is to be Cold War, then Cold War it is.

However, this is not taking place, at least not for the time being. Russia has not even responded to the sanctions. Moscow has not changed course in Syria, Iran or Afghanistan. Those objectives of collaboration with Washington that were in place prior to the Crimean separation remain in place. The elimination of Syrian chemical weapons, the facilitation of freight transport to Afghanistan via the “northern distribution system” and the regulation of the Iranian nuclear program also continue.

The Kremlin is not about to put on the mantle of the USSR and embark on an all-out confrontation with the United States. Its position is more one of issues that are “ours,” that are vital, that are simply non-negotiable and impossible to compromise on. Such is Ukraine, and likely, other parts of the post-Soviet space. And then there are all other issues on which agreement is not guaranteed, but not precluded either. This is precisely where give and take is possible, and if it becomes possible to arrive at mutually acceptable terms, then why not? The Near East belongs to this category.

During last week's television hotline appearance, Vladimir Putin unexpectedly referred warmly to the king of Saudi Arabia, calling him a wise ruler, and to relations with that country as positive. Apparently, this was a reminder that Moscow does not have any biases.

In step with the aggravation of the Ukrainian crisis the United States strives to mobilize its allies and partners for the aim of ensuring the isolation of Russia. In Moscow, for example, many are pondering whether Washington will be able, once again — as was the case in the early 1980s — to come to an agreement with Saudi Arabia on a sharp increase in oil supply and a lowering of prices. Back then, it was a powerful blow against the Soviet economy. The most frequent answer to this question is no, it cannot. The market and relations are different.

The basic distinction from the epoch of the Cold War is the impossibility of restoring block discipline. Thus, Russia at present has very good relations with steadfast US allies in the region — Israel and Turkey. Ties are developing with Iraq — which after the overthrow of Saddam Hussein was supposed to become pro-American. In the Persian Gulf, Russia is being closely watched, having made an impression on even many opponents with its consistent line on Syria and Ukraine. In this region a high value is in general placed on toughness and firmness.

One of the reasons that Moscow is not about to enter into confrontation with the United States in the Near East is that events on their own are going favorably for it. In the time that all attention was captivated by Ukraine, Syrian President Bashar al-Assad strengthened his position and is preparing for elections that in all likelihood he will win. The military situation is slowly tilting in his favor. He cannot win it, but it is absolutely certain that he cannot lose it. Relations between Russia and Iran are fully stable. After the departure of basic forces, it is highly unlikely that the Americans will be able to control Afghanistan. On the whole, the dynamic is not in favor of the United States. A Cold War is not needed. However, I will qualify that by noting that everything can change if the conflict in Ukraine enters into a far more acute phase.

It is notable that as an example of current complications, John presented not complicated relations with Russia or China, but precisely the Near East. “We witness in the Middle East many forces unleashed — Sunni, Shia, other — Islamism, radical Islam, so forth. So we have to really navigate our way through this much more complicated world,” Putin is in agreement with this, but today, this complication is to his advantage.