A group of women conduct sit-ins each week in Gaza's Park of the Unknown Soldier, calling for an end to the Palestinian division between Fatah and Hamas. 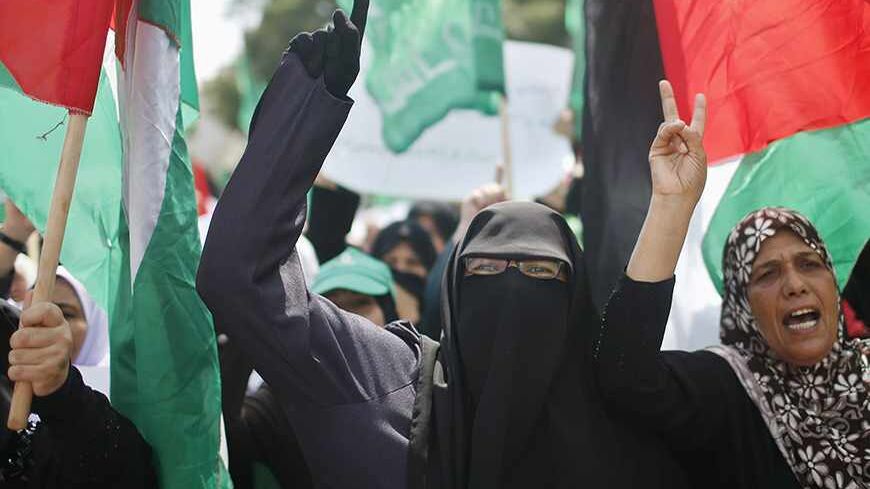 GAZA CITY, Gaza Strip — No one expected the four Israeli mothers to be successful in their series of sit-ins in front of the homes and offices of Israeli authorities in demanding their sons, soldiers serving in South Lebanon, be saved. However, they got what they wanted, Israel retreated and the movement of the four mothers came to mark a turning point in history.

After failed political meetings to end the division between Fatah and Hamas, all that is left is the weekly sit-in organized by a group of women in the Park of the Unknown Soldier each Tuesday. It brings together different parties, except for Islamist ones, to demand the end of the Palestinian political division.

Last Tuesday, Nov. 19, at 12:00 pm, Al-Monitor attended the sit-in organized by the General Union for Palestinian Women (GUPW) with the participation of women’s associations. Men from the investigative services, dressed in civilian clothing, surrounded the women who had begun to arrive.

One detective asked the campaign’s coordinator, Nawal Zaqout, about the event’s licensing. She replied that according to the law, there is no need for licensing. Even so, she had tried to contact a number of offices from the security apparatuses, which had not replied to her. They exchanged more questions and answers before he asked that they quietly leave before any problems begin.

Another detective also warned Al-Monitor to disappear from the gathering. “Leave from here, the press is not allowed. It is forbidden for you to write anything even if nothing happens,” he said to Al-Monitor. The threats began to escalate and the security men formed a circle around the women who were carrying out the sit-in.

Mariam Abu Daqqa, a member of the Popular Front for the Liberation of Palestine’s politburo was carrying a Palestinian flag. “We have come here since September of last year and they always tell us not to. Last Tuesday they arrested a large number of women,” she said.

Amal Hamad, president of the GUPW and a member of the Fatah central committee, spoke to Al-Monitor, saying, “Our message is to end the division. As women it is our national responsibility to end the harm that is being done to the Palestinian people.”

Another security figure appeared to mock the group. “Ask them if they are here on orders from their parties and how much they’re being paid,” he scoffed.

Amal ignored the listening ears of the security men. “We are not connected to parties or organizations. We are here from the GUPW and women’s centers — we regard this sit-in as part of our feminist struggle,” she added.

Saada Hajo, 60, seemed enthusiastic as she chanted: “The people want the end of the division.”

“I come every week from Khan Younis. Despite the security presence and the fear it tries to instill in us, we do not despair. We will come each Tuesday in order to end the division and bloodshed and to return to the period that existed in the seventies and eighties,” she said.

Iktimal Hamad, a member of the GUPW’s secretariat, was moving among the women trying to gather them together to face the security personnel that had begun to try to break them up. “The campaign is almost a year old. Each Tuesday we come out and we will continue no matter what. It has nothing to do with the political parties. We are just a group of women trying take effective action on the ground to end the division,” she said.

The security apparatus’ group increased in numbers and the women went to sit by the monument. Others who had been standing in the street joined them and raised the Palestinian flag. Their chants became louder and more organized when a van arrived. The women smiled, for the sit-in had been successful. The security vehicle retreated from the park while some well-known security personnel remained and tried to enter the sit-in to film it and take photographs. The chants became even livelier and louder: “National unity — unity!”

Zaynab Abu Moussa from the Popular Struggle Front (PSF) ran to grab a microphone from a nearby building. “Our sit-in has succeeded and the security apparatus has retreated — we will finish our work. It is our time to persevere until the division ends,” she told Al-Monitor.

Nebras Basisou, the official in charge of women’s issues in Fatah told Al-Monitor, “This sit-in began as a women’s initiative, after which it was backed by political forces and factions as a serious step towards ending the division.”

After several repetitions of the chants came a period of attack, which included the confiscation of identity cards of some of the participants, one of which belonged to the lawyer Salah Abdul Ati. The women were informed that there were Israeli planes in the sky and that the situation had grown dangerous. The sit-in then dispersed.

“The sit-in was not dispersed, it just ended,” Arabieh Abu Jayib told Al-Monitor as she left.

Ibtisam al-Zaanin of the Arab Liberation Front recalled Nov. 4, 2012, when the women’s police and security men came and beat the participants of the sit-in. “I was severely beaten on my head, forcing me to go to the hospital. Then I went to the police to file a complaint, where they refused to take it, so we filed a complaint with human rights organizations,” she explained to Al-Monitor.

Zaqout, the campaign’s organizer, spoke of previous harassment by security forces. “Last Tuesday, they detained me and my signs. They insisted that we were involved in unlicensed activity and that the security situation did not allow for any sit-ins. A few arguments broke out and they did not allow us to leave until the women protesting at the Park of the Unknown Soldier refused to stop except in exchange for our release,” she opined.

She added that she had gone on four occasions to notify the security apparatus of the event. “I went to the General Director of the Interior Security Forces, Salah Abu Sharkh, as well as to the faction coordinating office and the association security office at the Abu Khadra government compound, but I never received a response to the affirmative or the negative,” she said.

In a response from the Interior Ministry, Iyad Al-Bizm, the director of the ministry’s media office, explained that the sit-in had been going illegally on for more than a year, having not gone through the necessary procedures.

“Security personnel who go to the sit-in each week are monitoring the sensitivity of those women present, avoiding any confrontation with them,” he told Al-Monitor during a meeting at his office. He affirmed that everyone was entitled to express their opinion in accordance with the law.

A lawyer from the Independent Commission for Human Rights (ICHR), Salah Abdul Ati, affirmed to Al-Monitor that the right to peaceful assembly is guaranteed by international charters for human rights, by virtue of basic Palestinian law, and the General Meetings Law from 1998, as a form of expression.

“The law does not stipulate acquiring a license, though it does require notifying the police if the assembly involved more than 50 individuals. This does not apply to the weekly women’s sit-in. It is impermissible to obstruct it from happening so long as those assembling do so peacefully,” he said.