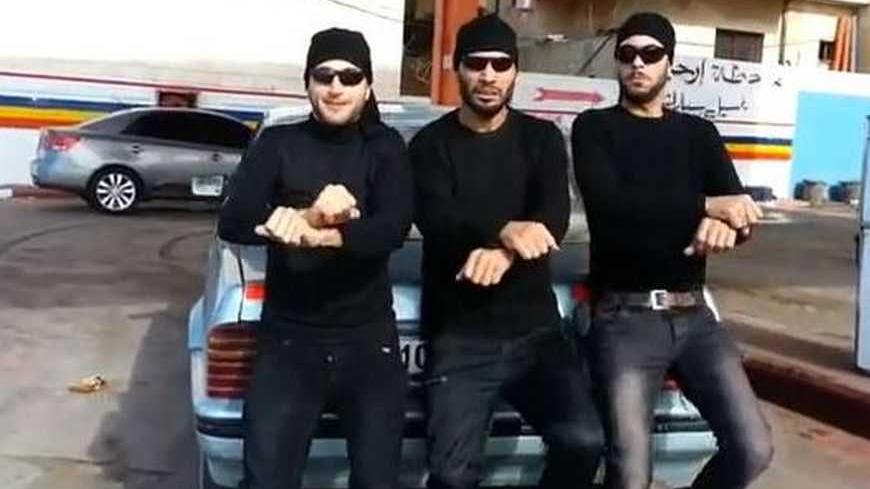 Men are seen dancing in a screenshot from the "Gaza Gangnam Style" video. - YouTube

Mohammed Baraket and his brother Muhannad were watching their children dancing to Gangnam Style by Korean singer Park Jae-Sang, when they thought: How about we produce a Gazan version of the song?

They felt that such an initiative would not be simple for two men in their thirties, living in the cramped neighborhood of Sabra. The idea, however, stuck in their minds. They shared it with their friends and peers, but were mocked and almost gave it up. Yet, with the encouragement of their young neighbors, the two young men finally decided to film Gangnam Gaza Style. The video has spread widely across Gaza and elsewhere, with nearly a million people around the world seeing it.

Cameraman Mohammed told Al-Monitor, “My brother Muhannad came up with the idea when he was watching our children — Liyan, Yazin and Louay — dancing to the song all day long. Although neither of us are highly active on the Internet or very tech-savvy, we had an inkling that we could film a Gazan rendition of the Korean song. I remember sharing my ideas with my so-called 'intellectual' friends working in civil society. While they scoffed at the idea in a very offensive way, simple people — such as my parents and elderly Gazans — welcomed the initiative and encouraged us.”

Parodying the chart-topping South Korean video, which racked up over a billion views on YouTube, was no easy task in a conservative society like Gaza. Yet the two brothers believed in their idea and formed a group of seven young men and two children. They searched for a good camera and finally found one. But when they started filming scenes in the area where tunnels are located, something unexpected happened.

“We were all arrested at one of the smuggling tunnels between Egypt and Gaza by the Gazan police on the pretext that we did not obtain permission to film. We stayed there for about ten hours. Our cameraman, who owned a professional camera, decided to bail out of the project, taking his camera away with him. He gave us the last seconds that were filmed at the tunnels,” Mohammed said.

The entire group was frustrated and decided to abandon the idea. Muhannad, however, insisted on filming the video, so they went on searching for a new camera. They went to a studio but were met with rejection as the studio owners derided their efforts and the idea.

In the end, a friend of the group gave them his new cell phone and laptop. They filmed the entire video using a cell phone camera. However, it had been difficult for them to find a location for group dance training. They had been training on the beach or any other open space, but were constantly harassed by security and mocked by passersby. They finally decided to train at home, but were not very satisfied with the results.

The Gangnam Gaza Style performers dressed in black and wore two-dollar sunglasses, their heads wrapped in the traditional Palestinian keffiyeh (scarf). The video highlights Gaza’s urgent problems — including the blockade, the high cost of living, unemployment and salary disruption — parodying the Korean video, which criticizes the situation in South Korea in a cynical way with funny dance movements.

During an interview at a café in Gaza, Baraket said, “We wanted to show that Gaza is not all tragedies, and it is possible for Gazans to express themselves in a funny way.”

The Gangnam Gaza Style group is now looking forward to filming the Gazan version of the Harlem Shake, particularly after a production company in Gaza expressed its willingness to support any musical work produced by the group, due to the success it has achieved and the thousands of messages of support it received since it uploaded the video to YouTube on Feb. 1, 2013.

This move is seen as a rare artistic initiative in the Gaza Strip, especially after dozens of other initiatives that were launched by young people over the past three years quickly lost steam.

Rami Murad, 31, is one of the young activists who contributed to launching a campaign to support national reconciliation in 2005. People responded by taking to the streets in protest the potential division between Fatah and Hamas at the time.

Murad told Al-Monitor that "the initiative continued until 2007, when young people went to the streets in an attempt to end armed conflict between Hamas and Fatah. At the time, Shadi al-Ajala and Taghrid al-Ila were killed and activist Ibrahim al-Shatli was shot in the chest." He added that following this protest, initiatives started to take on a more intellectual and cultural approach.

Thus, the "Isha" ("Wake Up") movement was founded in 2009. The movement called for freedom of expression and for maintaining the secular aspects of society and preventing its Islamization within certain frameworks. Isha advocates took to the streets for the first time in January 2010, calling for the right to vote in the first anniversary of the postponed legislative elections, while other parties failed to do so.

Murad added that following these events, the Isha movement became closer to an intellectual initiative that organized seminars and discussed books. Many initiatives along the lines of Isha have emerged, such as "Nazra," "Free Palestine," "Cup of Coffee" and "Youtubian."

The March 15 movement that was formed in 2011 was the most important product of all these initiatives. The movement was intended to be a Palestinian Spring and end the division.

Murad believes that young Palestinians are in an idle state: easily provoked, only to return to a state of negative adjustment. He explained that those who launch the initiative are the ones that the pay the price for their rebellion against norms.

He added, "Initiatives are always linked to rebellion. How would an initiative be creative without rebellion? But rebellion comes at a high price. Take, for instance, the young man who raised the Palestinian flag in front of the Gaza municipality building before the start of the first intifada. He was arrested by the Israeli army and was severely beaten. In a nutshell, this guy will never rebel again. Yet at least 30 young men witnessed his bravery, 10 of whom have followed suit."

Moreover, Murad believes that the persecution of young people has driven them to flee the country to escape the security forces, which have been tightening their grip on the youth initiatives and implicating them in suspicious acts. This is in addition to the young people's despair and their desire to settle down, which are the main reasons behind the current scarcity of initiatives in Gaza.

Despite this prevailing frustration in Gaza, there are still people who are taking action. For instance, activist Samah Ahmed, 32, began a hunger strike on Thursday, Feb. 21, 2013, and staged a sit-in along with her friend, Amal Khaled, in front of the Red Cross headquarters and started to drink water and eat salt.

During a meeting with Al-Monitor inside a makeshift tent the two women put up in front of the Red Cross headquarters, Ahmed said, "When we first went on hunger strike, the committee of forces and factions refused to receive us in the tent in front of the United Nations Development project, under the pretext that there has not been any decision by the factions to go on hunger strike.”

She added, “The Red Cross also has refused to open its door, so we staged a sit-in on the street. We were a few people, but later eight women and nine youths joined us, as well as a liberated prisoner who is 74 years old. This is in addition to many activists who sit with us for long hours every day." Samah, whose face was grey with fatigue, continued: "Today I began to feel dizzy. Another activist with us has been rushed to the hospital due to a sunstroke, and we haven't pitched our tent yet!"

She added some parties offered to provide tents, but on the condition that they become representatives of the sit-in. She stressed that their protest is unbiased toward any group and includes people of all factions, gathered under the Palestinian flag.

Samah stressed that this strike came in response to the cowardly reaction of the Palestinian parties that have been threatening the occupation forces, should one of the prisoners die in custody. These parties have not lifted a finger in reaction to the death of Palestinian prisoner Arafat Jaradat, who died as a result of being tortured in prison.