Through the lens of Muhammad Hassunah: 1970s Gaza

Prominent Gazan photographer and filmmaker Muhammad Hassunah speaks to Al-Monitor about Gaza in the 1970s and his artistic experiences. 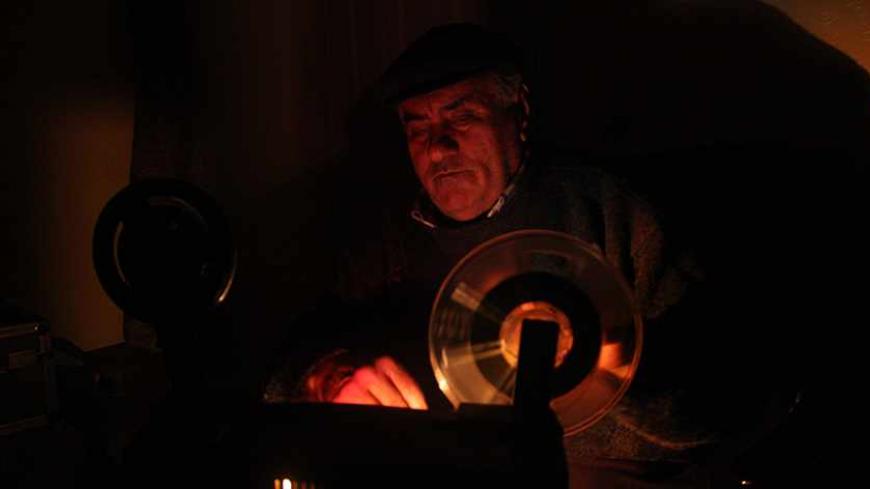 For those who didn't experience life in Gaza in the 1970s, it is difficult to imagine how things were back then. Although the imagination is the only thing that politics or religion cannot control, the contrast is really hard to conceptualize.

Women used to sport beautiful, brightly colored clothing in the 1970s. They would wear their hair in the finest cuts and styles. They would sing and laugh in the streets. Their woes were lighter, their joys were greater. Men and women would freely mix together everywhere, with music mingling with laughter in public places.

That, at any rate, is how Gaza seemed in the 1970s, as depicted in the film reels of Muhammad Hassunah. Al-Monitor's correspondent visited the the photographer in his Gaza home near the sea in the same room where, through an old cinema projector, he used to screen films for Gazans of their family celebrations. He managed with some difficulty to get the old machine — which had not been used in 35 years — up and running. And through it, he brought the Gaza of a past generation back to life again.

"Filming means everything to me. Our lives revolved around the cameras. I have bought every kind of camera in my life. I used to be known as 'Hassunah the photographer,'” he told Al-Monitor.

His two sons, Yahya and Yousaf, helped him to get the film reels going. After a number of attempts, they succeeded in playing a film of a 1970s wedding between two local families.

The gloomy colors and scowling faces in the remote and tranquil village evokes the feeling of watching an Italian film by Pier Paolo Pasolini.

The streets appear dusty, a white Mercedes cutting its way through. The family's joy, the mixed-gender wedding celebration, the rows of chairs in an open field all speak of a different Gaza. There was a spontaneity unbound by the constraints that are omnipresent today.

As Hassunah put it, "In the 1970s, many families used to ask me to film them and their celebrations, the rich and poor. And the only way to record the event was on these machines. The families of the bride and groom would come together to watch their film here."

He talked about his professional journey, explaining that he first studied photozincography, or zinco, before 1967 at the Al-Gomhuriya paper in Egypt. Afterward, he returned to Gaza and worked in zinco at the Akhbar Filastin newspaper. He later went to Tel Aviv to study cinematography and worked during the day as a zinco photographer and party and studio photographer at night.

“At that time, I bought an 8mm camera, brought it into Gaza and began to work as a wedding photographer,” he added. 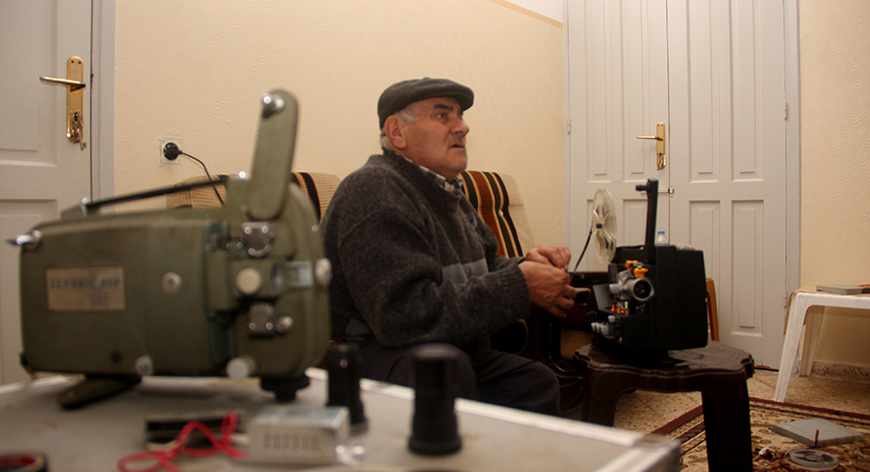 Yahya, his older son, said, "I began studying photography when I was seven. I remember that my father would bring us Micky Mouse films on these film rolls, and I would sit with my brother and my four sisters and together we would watch the latest cartoons on that wall. It was only us. Those memories are filled with images and happiness."

Yahya succeeded in rewrapping the film reel, on which the film had been turned upside down. Another reel depicted a birthday party dated 1978. The gathering was overflowing with all kinds of sweets, the men were dressed in formal wear and the women were singing old folk songs. Some of the tunes were Egyptian; one rang out, "Ya Abna al-Hallal, Sharid Minni Ghazzal" ("Oh people, my love got away").

Yahya points out his younger self in the video; he was then a child of four. His mother laughed and said, "Now they say that birthday parties are haram [religiously proscribed], and very few people even bother to celebrate them."

Hassunah said, "Of all the people who appear in this video, most of them are today either dead or very old." He added that it was very difficult for him to forget a face once he had filmed it. He ticked off the names of the families whose weddings he had photographed, adding that many of the couples now have grandchildren.

Hassunah asked his other son to bring out the older cameras from their hiding place. Soon enough, a pile formed around us. Among them was an enormous Hitachi camera, one that would be carried around on the shoulder for use in Israeli and Palestinian weddings. Other cameras seemed like antiques such as the Rolleiflex. "I used to film Israelis' weddings, too. The people at the celebrations rarely knew that I was Palestinian, since I'm fluent in Hebrew. And besides, they were impressed with my professionalism as a photographer,” Hussunah said.

In 1982, Hassunah was one of the first who brought video into the Gaza Strip. Soon people began to swarm around him and, at first, he would offer them the choice of whether to film weddings on video or on film. They would ask him about the features of each, and he quickly came to favor filming on video. As he told Al-Monitor, “Sometimes, I would be booked for four months solid, without any breaks. In my life, I have filmed thousands of weddings.”

He described today's weddings by noting that, nowadays, people believe that anyone standing near the wedding hall entrance is spying on the women. Most of the time, they demand that a female photographer film the event, after separating the genders, putting the men in one place and the women in another. He added, "Strange customs that we've never seen before have become commonplace. There was a certain openness in the past, and people were more honest."

He noted that photographers today rely upon digital devices and computer programs. They no longer set and adjust the image frames, the color, movement and exposure settings manually. Thus, according to Hassunah, much of the artistic spirit is lost. Now, following technological developments in film, it is difficult to convert Hassunah's old reels into digital copies, due to the scarcity of acidification materials and a lack of the appropriate electronic converters in Gaza.

Alongside the cameras lying beside and around us are hundreds of photographs. They capture countless moments of mirth and laughter at Israeli and Palestinian weddings. Through the pictures, lives of hundreds of men and women peer out from the black and white images. Hassunah refused to have these photos published, given that they are personal photos depicting well-known families.

In 1997, Hassunah opened Jericho Artistic Production, a company that produced Palestinian TV series and movies such as the film "Al-Is'af" ("The Ambulance"). But his fame did not last long. He was soon arrested by the security services of the Palestinian Authority in 2000. They took three of his most expensive cameras and never returned them. This was not the first time that the infamous intelligence services intruded upon his films and his property. In the 1980s, the Israeli security forces stormed his home and took dozens of cinematic film reels containing images of the Gaza Strip and the [refugee] camps of the 1960s.

Hassunah wept as bitterly as if he had lost a child and said, "There are things that a man can never get back, no matter how long he lives. Once, there were international organizations that asked me to film the Gaza Strip from the north to the south. I kept those in my personal archive to remember, before the occupation [forces] stole them. Our country was more beautiful than you would expect."

In the last moments before the last film reel cuts off, it showed moving images of Gaza City in the 1970s, depicting streets filled with trees. Back then, one would only rarely see large cement buildings like those that now overcrowd the once green land.