Freelance photographer Mahmoud "Ezz" al-Zaanoun brings moments of joy to Gaza children with exhibitions of his photos on his mobile clothesline gallery. 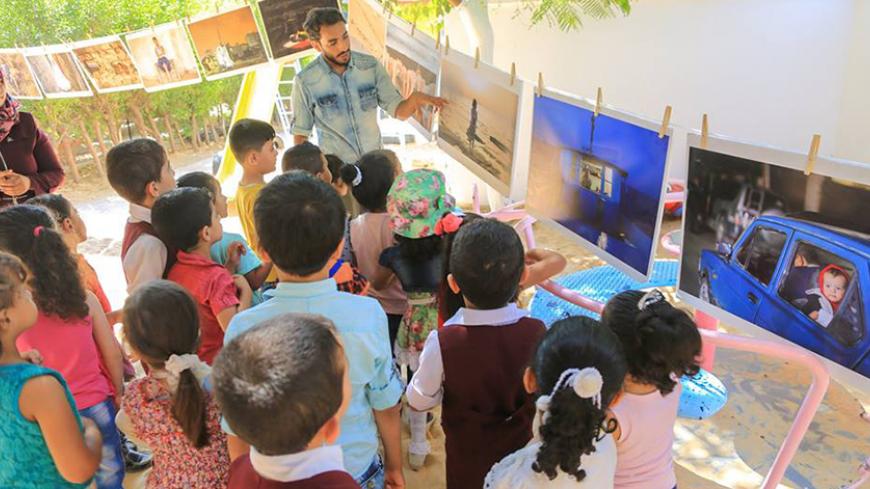 GAZA CITY, Gaza Strip — An exhibition of works by photographer Mahmoud “Ezz” al-Zaanoun has been traveling around the Gaza Strip since Sept. 25, starting at the Beach camp. However, his images depicting a Gaza most people never imagine aren't hanging on the walls of a gallery or museum, but on clotheslines strung in the alleys of the poorest and most populated refugee camps in Gaza and in neighborhoods devastated by war with Israel.

Under the banner “Arts Are Not a Business,” Zaanoun goes to devastated areas and marginalized camps to affirm that the arts are the best tool for delivering the message to Israel that Palestinians have a love for life and can use the simplest of tools to create joy.

For his exhibits, Zaanoun enlists the help of local Palestinian children to attach regular clothesline to the sides of buildings and walls and hang his photos from them. After they finish the installation, the children take a closer look at the images, and Zaanoun explains the details of each one, such as where and how they were taken, and answers the children's questions about them.

“I have been taking photos for 10 years, but I have never taken part in any exhibitions in Gaza, nor have I posted them on social media, like photographers usually do,” Zaanoun told Al-Monitor. “I do not want my photos to be exhibited in private galleries like other photographers, as only a certain class of people visits them. I wanted them to be pinned on clotheslines to allow the largest number of people to view them.”

Zaanoun also said, “I wanted the photos to be different from the traditional ones filling social media pages and to show the beauty of the Gaza Strip, distant from the reality faced by the citizens. I have always wanted to visit marginalized and devastated places and hang photos taken with my simple cameras on clotheslines just like wet clothes are pinned to the lines.”

Through his “simple” tools, Zaanoun believes he shows the world that a person can make something out of nothing. His photographs convey love and hope for life, despite its difficulties, and the sorrow and pain that the residents of the besieged Gaza Strip face daily.

Zaanoun likes to take pictures of nice scenes from Gaza, showing its bright sides, to send to the world the message that Palestinians deserve to live free and decent lives filled with love and joy.

“There are plenty of beautiful things around us, which we should be looking out for by opening our eyes to them,” Zaanoun explained. “What I offer differs from that of other Gaza Strip photographers, as I focus on natural scenery, the sunset and reflections of light on water.”

Through shots representing life and hope, Zaanoun reveals the rarely imagined side of Gaza. “I tried to be unique with photos reflecting the sunset and showing children on bicycles and people playing in the sand at the seashore. Also, the photos were taken from a low angle to be flattering.”

The photograph that gets everyone's attention shows a Palestinian bride in an alleyway of a camp amid photos of natural landscapes, a sunset, the sea, photos of young men taking selfies, children on a boat and others in a car. Zaanoun's photos reflect an attempt to overcome the harsh reality of Gaza.

Zaanoun explained that through his mobile exhibitions, he is trying to help children living in poor and devastated areas escape the psychological pressure they are under. He shows them pictures of places different from those where they live, teaches them about photography and releases their hidden talent and spirit by allowing them to use his cameras to snap photos themselves.

Mohammed Mustafa, 12, was surprised at the photos he saw hanging on the walls near his house one day as he returned from school. He saw beautiful outdoor scenes of Gaza for the first time. Having been focused on a boat in a photo displayed in the Beach camp, he told Al-Monitor, “These photos are very interesting. I do not want the exhibition to end. I want to continue to enjoy looking at these photographs that show the beauty of our city.”

Rahaf Hamdan, 13, was preoccupied with Zaanoun’s camera, holding something in her hands that she had previously only seen on television but had always dreamed of having. Hamdan asked if Zaanoun would be coming back, so she, along with her classmates, could again hold a camera and take photographs like his.

Zaanoun exhibited photos in mid-October in the Jabaliya camp, in mid-November in the Nuseirat, Bureij and Maghazi camps and is preparing an exhibition for mid-December in the Rafah camps. Zaanoun said he also plans to give photography lessons to children, seeing how it positively affects them psychologically, helping them overcome the scars of life in Gaza and its wars.

Zaanoun has won several awards for his work, including the 2013 Best Humanitarian Photography Award at an Arab photography exhibition sponsored by Dar Safi Publishing in Washington. In 2014, one of his photos reflecting the reality of women in Gaza won first prize in a contest sponsored by the Arab Cultural Association in Finland. He also won the Anadolu Agency's Best Photo of the Year prize in 2014 for his photo titled “Struggle for Survival in Gaza.”