While the president-appointed committee met to prepare the new Egyptian Constitution, activists protested outside their meeting, only to be harassed and detained by security forces. 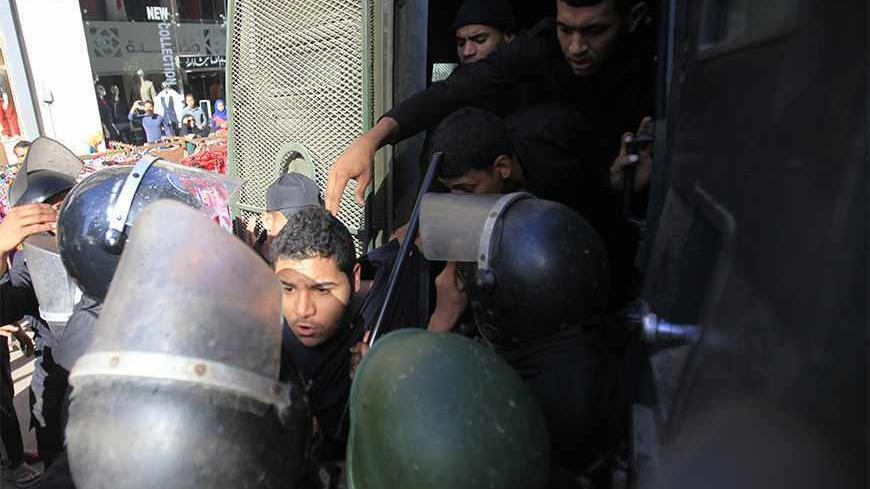 CAIRO — Dozens of young men and women activists were detained Nov. 26 in the courtyard of a garage belonging to the General Authority for Roads, Bridges and Land Transport, adjacent to the Egyptian Shura Council building. The activists were surrounded by security forces as they awaited the arrival of additional police transport vehicles to supplement the contingent on the scene, already filled to the brim with their comrades, following their protest in front of the Shura Council. This demonstration was held to affirm their rejection of the new protest law — which went into effect that day — and object to the article permitting civilians to be tried in military courts, which the 50-member constitutional committee is leaning toward including in the new constitution.

Such was the scene observed by Al-Monitor from inside the Shura Council building, where activists continued to challenge security forces by chanting slogans against the demonstration law, even after the police arrested them and dispersed their colleagues by using water cannons and firing weapons in the air.

The cries grew louder as a few members of the constitutional committee approached, having adjourned their meeting to listen to the young people’s demands. Upon seeing them, the female activists yelled, “We have been dragged on the ground, beaten, sexually harassed and had our clothes torn off.”

The young detainees were extremely agitated as they chanted “null and void,” refusing any attempts by movie director and constitutional committee member Khaled Youssef to calm them down. Youssef was at the head of the delegation that came out to meet with the protesters before they were transported to the prosecutor’s office and charged with violating the new demonstration law and failing to obtain permission to demonstrate. In the end, Youssef had to retreat and walk away after one of the protesters cursed and insulted him.

The detained youth also refused to listen to Al-Azhar representative Abdullah al-Najjar and accused him of still being loyal to the regime of deposed President Hosni Mubarak. They demanded that he go see the torn clothes of the young women being held in one of the nearby transport vehicles before talking to them. Many of the young people stood with their backs turned to the committee members and continued to chant, surrounded by barricades and security forces, “We refuse to be ruled by soldiers or religiously guided by the [Muslim] Brotherhood.”

In interviews conducted by Al-Monitor with a number of young detainees just before they were pushed into awaiting Interior Ministry transport vehicles, Mustafa Yusri, a founding member of the Dostour Party, said, “We came to peacefully raise the slogan, 'No to military trials.' But the security forces dispersed us by force and assaulted us. The girls were dragged on the ground and their clothes were torn off. A female colleague with heart problems was assaulted and beaten; they detained us here and we still don’t know what our fate will be.”

Noha Tarek, a founding member of the Road of the Revolutionary Front, told Al-Monitor that compromising on the subject of military trials was unacceptable. She added, “We did not revolt to be met with such a fate. Our dream was to have a respectable constitution that rejects military trials. Isn’t it time for the military to stay clear of politics? Aren’t 60 years under their rule enough? It is time for them to refrain from meddling in political matters.”

Concerning accusations that they violated the new demonstration law, she said, “We are under military rule. We demonstrated to overthrow the Muslim Brotherhood because they failed to achieve any of our demands. We will continue to demonstrate against the army’s attempts to restore oppressive policies.” She added that insults and curses were hurled at members of the constitutional committee because they stand against revolutionary forces and are using the conflict with the Muslim Brotherhood as a pretext to oppress the activists. She stressed, “We have nothing to do with the Brotherhood, and we will not allow that this be used as an excuse to reinstate the practices that we have seen. What is different this time is that we were dispersed with water cannons, and were not fired at with birdshot, as was the norm before.”

A young woman interrupted Tarek and said, “My name is Nazili Hussein. I am an activist member of the group opposing military trials for civilians. My colleagues and I were standing in front of the Shura Council when we were beaten up, dragged across the ground and sexually harassed.” She explained that their refusal to listen to attempts at mediation by members of the constitutional committee who came to talk to them, prior to them being transported away, was that they did not recognize the legitimacy of the committee. For a committee that allows people to be dragged on the ground outside its headquarters, just because they demand their rights, is null and void. “A committee that agrees to military trials for civilians, and is unable to stand up to the military when the latter appropriated powers beyond those usurped during the rule of the Muslim Brotherhood, is also null and void,” Nazili said.

After the committee members — among them the representative of the Tamarod movement, Mahmoud Badr — moved away from the iron railing separating them from the young male and female detainees who refused to listen to them and accused them of betraying the people and the revolution, committee member Ahmed Khairi, who represents the workers, tried to approach the protesters again and asked them to choose delegates who would meet with the committee members. But the detainees replied by loudly chanting: “Down with military rule. We refuse to be ruled by soldiers, or religiously guided by the Brotherhood. Those who killed Giki [Gaber Salah Gaber] were soldiers, remember that and never forget.” As they boarded the transport vehicles normally used to carry criminals and convicts, they continued to chant, “Prison never changes ideals.”

The strange irony witnessed by Al-Monitor during those few minutes with the young activists held in one of the garages adjoining the Shura Council building was when they shared their water with the security forces who guarded them. Earlier, a large number of them had complained of extreme thirst and were helped by members of the Shura Council guards, who bought them bottles of water that they handed them through the fence. The young activists generously shared with Central Security Forces policemen, who also complained of being thirsty.

The confrontation did not end when the young revolutionaries boarded the police vehicles. People gathered to support them in the city center as well as in the vicinity of the investigating prosecutor’s office in New Cairo City, which prompted the authorities to release the female detainees without bond and forced Prime Minister Hazem el-Biblawi to invite all political factions and youth groups to discussions on amending the new demonstration law.

by Ismail BELLAOUALI with Philippe AGRET in Rabat and Marie GIFFARD in Madrid | AFP | Jun 24, 2022
END_OF_DOCUMENT_TOKEN_TO_BE_REPLACED