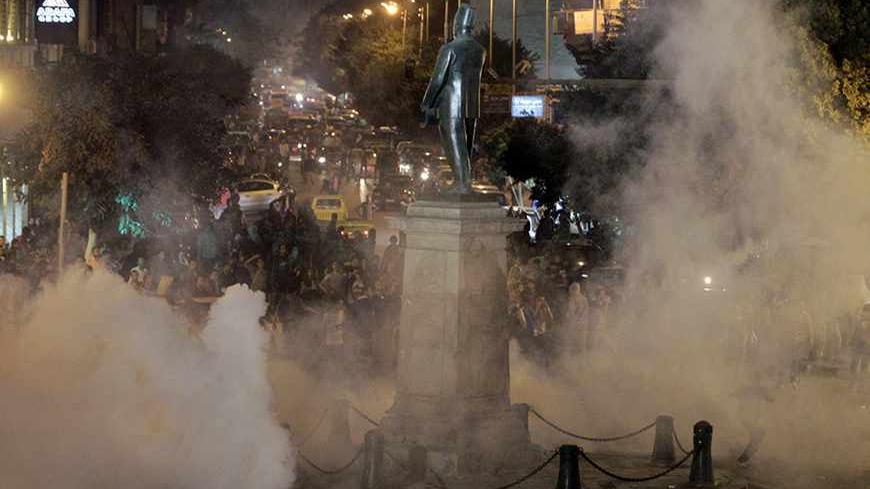 CAIRO — It took only minutes for activists to witness Egypt’s controversial new protest law in action on Nov. 26. After warnings issued through loudspeakers, police forces used water canons and tear gas to disperse two separate protests in the downtown area, beating some with batons and fists, and arresting more than 50.

The first arrests came just after 2 p.m., when police reportedly told protesters outside the Journalist’s Syndicate downtown that their demonstration to mark the first anniversary of the death of activist Gaber “Jika” Salah, 16, was illegal according to a new law issued on Nov. 24 by interim President Adly Mansour.

The 25-article law requires a three-day notice of public meetings and electoral gatherings to the Interior Ministry. Fines of up to 300,000 Egyptian pounds (approximately $43,540) and prison sentences of up to seven years may be imposed on those judged as violators of the law.

Soon after the announcement, police sprayed water canons and used batons to beat demonstrators and arrest some of them, according to Twitter reports.

Two hours later, about 150 protesters stood across the street from the Shura Council, the upper house of parliament not far from Tahrir Square, holding signs and chanting against the use of military trials for civilians in Egypt’s new draft constitution — currently being amended — and against the new protest law.

“The police are thugs, the police are terrorists,” they chanted, among other slogans. “We swear on the blood of martyrs the revolution will rule soon.”

It was the second test of the new protest law that day. A row of riot police stood in front of the council gates, flanked by two armored vehicles and a water canon truck. Some said later they heard an officer announcing the protest would be dispersed in four minutes. Others said they heard no warning. A group of protesters began walking toward the police, chanting.

An officer ordered traffic to be stopped. It was just before water canons showered protesters, sending most running, as police in black uniforms and plainclothes rushed after them, some swinging batons or fists.

A young woman screamed and kicked her legs as a few police officers beat her with their fists as they carried her away. A man who jumped in to defend her, swinging his arms wildly, was also pulled away by police into an area inside the entrance gates of the council building. More than 30 people including journalists, lawyers and prominent activists were arrested and held for hours behind the gates.

Among those arrested was the founder of the No to Military Trials for Civilians campaign, Mona Seif, who tweeted a photograph of a handwritten list of 31 detainees being held with her. She was heard chanting curses and slogans directed at the police from behind the gates, which were echoed by a few dozen activists who had regrouped outside. Their numbers grew to dozens as the sun set.

“They want to shut us up, but we will not be silent,” they chanted. “Come and kill us, we are not better than the martyrs. Let our comrades go.”

The Egyptian Center for Economic Rights issued a statement condemning “this new excessive and brutal use of force by security forces,” saying at least 50 people had been arrested.

Salma Fouad, a member of the National Front for Justice and Democracy, had arrived just after the protest was dispersed. She stood outside the Shura Council gates with two friends, who were calling other activists to find out if they were being detained inside. Tweets from friends of some female detainees were accusing the police of assault and sexual harassment during their arrests.

“This government is in office now because of the protests of June 30,” Fouad said, referring to the military-backed ouster of former President Mohammed Morsi following massive protests. “So no government that comes to power with the protests of the people has any right whatsoever to issue such a law.”

Meanwhile, a 50-member committee tasked with amending the constitution written under Morsi’s rule reportedly suspended its session inside the Shura Council until the protesters were released. The state newspaper Al-Ahram reported that Prime Minister Hazem al-Biblawi had agreed to release the protesters who were still being detained on the night of Nov. 26, and a committee would be formed to discuss the law in response to strong criticism against it.

US officials have also criticized the new law. In a statement on Nov. 25, State Department spokeswoman Jen Psaki said US officials are urging the interim government to respect individual rights and ensure the new constitution does also.

“We share the view of Egyptian civil society representatives that this law, which imposes restrictions on Egyptians’ ability to assemble peacefully and express their views, does not meet international standards and will not move Egypt’s democratic transition forward,” Psaki said.

In response to the arrests, some protesters announced on the evening of Nov. 26 on Twitter that they planned to hold a sit-in at Talaat Harb Square. Police dispersed an initial gathering there earlier with water canons and tear gas, according to Twitter reports from journalists on the scene. Other activists tweeted they were standing outside police stations where friends were being detained.

In accordance with the new law, on Nov. 25 the April 6 Youth Movement and the liberal Constitution Party had requested a protest permit for the demonstration on Nov. 26 from the nearest police station, they said in a statement.

Mahmoud Afifi, former April 6 Youth Movement spokesman and current member of the National Partnership Current, said in an interview with Al-Monitor before the protest on Nov. 26 that the law is “against the demands of the January 25 Revolution.”

“We are against protest suppression,” he said. “A government who tries to ban protest in that way is a failure. We think these laws are unjust, and that is why we will boycott it and be noncompliant. We will continue until they withdraw the protest law and cancel the military trials for civilians article in the constitution.”