The chairman of the Senate Armed Services Committee opposes new Iran sanctions while the United States “probes” Iran’s sincerity in negotiating limits on its nuclear program. 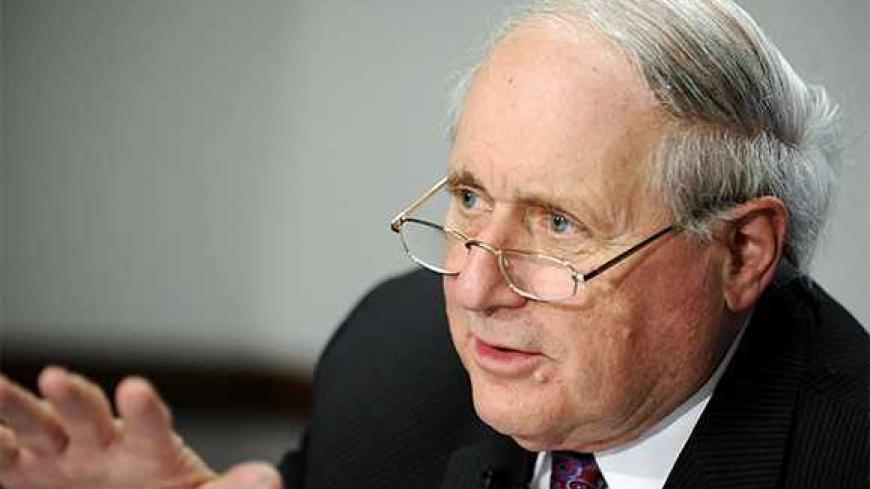 Carl Levin (D-Mich.), chairman of the Senate Armed Services Committee, said Friday, Nov. 1, that Congress should not pass new sanctions against Iran while the Barack Obama administration “tests” the chances for a nuclear agreement with the Islamic Republic.

Speaking at the Council on Foreign Relations in Washington a day after Vice President Joe Biden, Treasury Secretary Jack Lew and Secretary of State John Kerry briefed senators on the current negotiations, Levin said he did not know whether the softening of Iranian rhetoric since the election of President Hassan Rouhani represented “real change.” But, he added, “Whether it is a 10%, 40% or 60% chance [that the change is real], it should be tested and probed. We should not at this time impose additional sanctions.”

As Levin spoke, technical experts from Iran, the United States and the other permanent members of the UN Security Council plus Germany were concluding two days of talks in Vienna on the details of an Iranian proposal tabled in Geneva last month. Iranian officials also met earlier this week with Yukiya Amano, the head of the International Atomic Energy Agency (IAEA), and reportedly made a new offer to clarify long-standing disagreements with the IAEA about Iran’s past nuclear work.

Amano, speaking at the Woodrow Wilson International Center for Scholars later Friday, said Iran "made a proposal that contains real substance" after years of "going around in circles" in talks with the IAEA. He did not provide details on whether Iran had agreed to live streaming of its nuclear facilities with remote cameras. He did say that Iran was no longer tying progress on resolving questions about possible military dimensions of its program to the broader talks about a nuclear agreement.

The next round of high-level talks convenes in Geneva next Thursday, Nov. 7. The Senate, which had been expected to take up new sanctions legislation in October immediately after the end of the US government shutdown, now looks unlikely to act for another 10 days, if not longer.

Responding to a question from Al-Monitor about the legislation, which would attempt to further curb Iran’s already diminished oil exports, Levin warned that if “we respond to this possibility [of a nuclear deal] in a negative way, … if we tighten the screw when it looks as though the Iranian leadership … may be willing to talk about modifying, changing, making less threatening the nuclear program, we could lose the very countries — particularly Russia and China — who have stood with us to put sanctions in place. We should not at this time do something on top of what we have done.”

In the past, sanctions bills have been attached to defense spending legislation that is regarded as must-pass in Congress. Asked by Al-Monitor if Levin, as the Armed Services Committee chair, could prevent such a move this year, he was noncommittal. Other “people may try to do it,” he said.

Following fairly upbeat meetings in Geneva last month, the Obama administration has been lobbying hard for a pause in new legislative action. In addition to Biden and Lew, Undersecretary of State Wendy Sherman, the chief US negotiator with the Iranians, has been briefing members of Congress and calling for a respite while negotiations continue and look promising.

The administration has also spent considerable time briefing Israel about the talks and this week reportedly convinced four major US Jewish organizations to agree to a 60-day moratorium on pressuring Congress to vote on new sanctions.

Levin would not divulge details of US-Iran negotiations apart from saying, “My hunch is that this is going to be done in phases,” and that the first phase might begin “hopefully in a month or so.”

He suggested that the United States should respond through unspecified sanctions relief to “significant” Iranian concessions. He also said that Iran would not be required to cease uranium enrichment in the first phase of an agreement, although zero enrichment remains a US goal.

“At the end of the day, we may not allow enrichment … but obviously, that won’t happen in phase one,” he said.

Iran has insisted on the right to enrich uranium on its soil under any final accord.