P5+1 looking for 'quick results' in talks with Iran

A top Western diplomat says that if agreement is reached on the end game, initial confidence-building steps would be reversible on both sides. 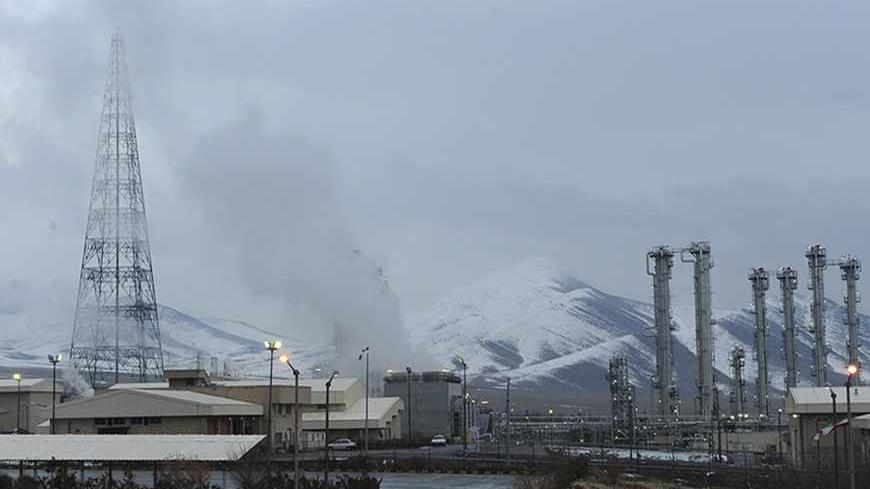 As talks begin Thursday, Nov. 7, in Geneva, both Iran and the five permanent members of the UN Security Council plus Germany (P5+1) are looking for “quick and concrete results,” according to a Western diplomat in Washington.

The diplomat, who spoke on condition of anonymity, confirmed previous reports that the goal of this week’s round of talks is agreement on an end state for the Iranian nuclear program and initial “reversible” confidence-building steps toward that goal.

“We all have an interest in quick and concrete results,” the diplomat said, adding that the objective is to define “what we want at the end result, and find a way [to proceed] until that.”

In Geneva, Michael Mann, spokesperson for European Union foreign policy chief Catherine Ashton, told Al-Monitor’s Laura Rozen and other reporters covering the talks, “We hope to make concrete progress in the upcoming round.”

Later, a senior US official told journalists, "The first step understanding would put time on the clock to negotiate a final agreement that addresses all of our concerns."

Ashton described a previous meeting in Geneva as “substantive and forward looking,” but did not divulge details of Iran’s position or that of the P5+1.

Iranian Foreign Minister Mohammad Javad Zarif told France 24 during a visit to Paris Nov. 5, “We have made some progress, but there is a great deal of mistrust in Iran concerning the attitude, behavior and approach of some members of the P5+1.” Zarif, who met with French President Francois Hollande and Foreign Minister Laurent Fabius, added, however, “I believe it is even possible to reach that agreement this week, [but if] we don’t make a breakthrough at this round, it’s not a disaster.”

Iranian officials have made it clear that they would like to keep as much of their nuclear infrastructure as possible and insist that what they view as their “right” to enrich uranium be part of a final deal. In return, Iranian officials have said they are willing to allow more intrusive monitoring of their facilities to provide confidence that they are not able to quickly break out of their obligations under the Nuclear Non-Proliferation Treaty and build weapons.

Western officials have been cagey about whether they would accept any uranium enrichment on Iranian soil, noting that six UN Security Council resolutions all call on Iran to suspend this activity.

Asked by Al-Monitor whether the end state would allow Iran to keep all its nuclear facilities in return for more transparency, the diplomat hinted at some flexibility about the main uranium-enrichment facility at Natanz and even an underground site at Fordow, but said Iran would have to halt construction of a heavy-water reactor at Arak which, when completed, would yield plutonium, another potential bomb fuel. Allowing Arak to be finished would mean that it would be too dangerous to destroy, because of the radioactive materials that could be released once the reactor goes on line. Regarding Arak, “It's black and white,” he said. “Either it's built or it's not. So the only answer is that it should not be built.”

The diplomat said that if agreement is reached on the end game, initial confidence-building steps would be reversible on both sides. Thus if Iran agrees to freeze enriching uranium to 20%, the P5+1 might allow Iran easier access to oil revenues currently bottled up in banks in countries such as China, Japan and India that are still importing Iranian oil.

Irreversible concessions would entail more substantive sanctions relief, he suggested, adding, “There is some margin to suspend some sanctions along the way” if agreement is reached on the end game.

Concluding an accord on the final status of the Iranian nuclear program would also facilitate US domestic politics, the diplomat said. If initial steps are viewed as “the first steps of a global package with a clear view of the end game, then you change the equation.” It will be easier for the Barack Obama administration to “go to [Capitol] Hill and say we need some suspension of some sanctions [if presented as] the first step of a deal whose end game we know."

The Obama administration has asked Congress to hold off on passing new sanctions while it awaits the results of the Thursday and Friday talks in Geneva. Key senators such as Carl Levin, chairman of the Senate Armed Services Committee, have indicated that they will try to prevent new sanctions from being tacked on to a must-pass defense authorization bill, as has happened in the past. Levin has said that it will require 60 votes to add amendments to the annual Pentagon spending legislation.

Passing more US sanctions now “would be a mistake,” the Western diplomat said. On the other hand, the threat of new sanctions legislation that would further restrict Iranian oil exports is not a bad thing from a negotiating point of view, he said. “That there is noise about it on the Hill might be helpful.”