US President Barack Obama’s meeting with congressional leaders offers a reprieve from the Senate moving ahead with sanctions legislation on Iran, at least until December. 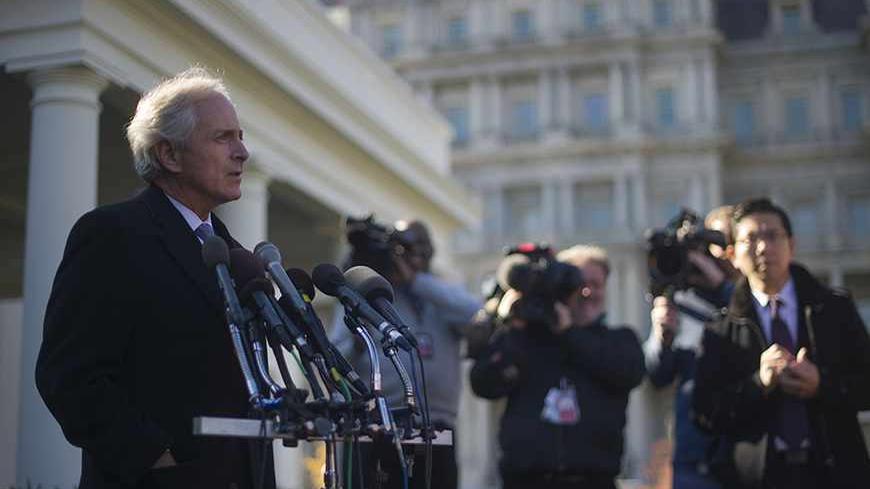 Sen. Bob Corker, R-Tenn., talks with reporters at the White House after a meeting on Iran with President Barack Obama in Washington, Nov. 19, 2013. - GETTY/AFP/Jim Watson

Facing skepticism, if not outright opposition, to an emerging nuclear deal with Iran from the Israeli government and many members of the US Congress, the Barack Obama administration will resume talks tomorrow, Nov. 20, in Geneva without the added complication of imminent new US sanctions.

Senators emerging from a meeting with President Obama on Tuesday said no Iran sanctions would be attached this week to the National Defense Authorization Act (NDAA), a must-pass annual bill that funds the US military. “The president has asked for some time for this to be negotiated and see if Iran will live up to the obligations,” Sen. Bob Corker, R-Tenn., the ranking member of the Senate Foreign Relations Committee, told reporters. (See updated statement from Corker at bottom of story)

Adam Sharon, spokesman for Sen. Robert Menendez, D-N.J., the Foreign Relations committee chairman, told Al-Monitor in an email, “This week, fair to say that Iran will not come up as part of the NDAA, but the NDAA won’t be voted on this week. It will bleed over into the second week of December when we return from recess. What happens then, it’s too soon to say.”

While the Republican-led House of Representatives voted in July to impose new sanctions, the White House has so far persuaded the Senate's Democratic leaders to prevent action on a stand-alone bill, leaving sanctions supporters such as Menendez and Sen. Mark Kirk, R-Ill., the only option of trying to tack them onto an obligatory vehicle like the NDAA. This tactic worked in 2011, producing an extremely tough measure that blacklisted Iran’s Central Bank, among other things.

Kirk and five other Republicans have prepared a new amendment that would sanction any bank processing non-humanitarian transactions for Iran using Iran’s frozen overseas assets and demand that Iran stop enriching uranium in the first phase of a nuclear agreement. However, Sen. Carl Levin, D-Mich., chairman of the Senate Armed Services Committee and the manager of the defense bill, has said that he opposes new Iran sanctions now since those in force have already proven effective and more could make it harder for Iran to agree to a deal and fracture a multilateral consensus in favor of diplomacy. He has also said that he would require 60 votes for any amendment to be added to the bill, thus limiting amendments to those with a strong bipartisan consensus.

In a speech on the Senate floor on Tuesday afternoon, Levin did not mention the words “Iran” or “sanctions” but urged his colleagues “who have amendments to bring them to our attention so that we can try very hard to clear amendments, which can get support on both sides of the aisle and which have no strong objection.”

Levin also indicated — contrary to the Menendez spokesman’s remarks — that he would try to get the Senate to vote on the entire defense bill this week before Congress adjourns for the Thanksgiving holiday. If the Senate doesn’t act now, he said, there won’t be time to reconcile the legislation with a House bill for final action before the end of this year’s legislative session.

The delay is good news for the beleaguered Obama administration, which has been buffeted by criticism of what appears to be an emerging deal that would curtail Iran’s nuclear program for six months in return for modest sanctions relief while a comprehensive agreement is negotiated. Critics fear that the concessions required of Iran in the first phase would be the only concessions Iran will make and that sanctions will unravel and open the floodgates to new foreign investment in the Islamic Republic.

However, the Iranian economy is in such a deep hole — and foreign companies have been so spooked by the threat of losing access to the US market or paying hefty fines — that it is unlikely they will come flooding back after only a partial agreement or that Iran would be willing to settle for access to a few billion dollars of its frozen oil revenues, especially if it faces more US sanctions next year.

Obama, joined Tuesday by Secretary of State John Kerry and national security adviser Susan Rice, met for two hours with the chairmen and ranking members of the Senate Banking Committee, Foreign Relations Committee, Armed Services Committee and the Senate Select Committee on Intelligence to brief them on the latest proposal under consideration by Iran and the five permanent members of the UN Security Council plus Germany (P5+1).

Afterward, the White House released a statement saying that Obama “made clear that achieving a peaceful resolution that prevents Iran from obtaining a nuclear weapon is profoundly in America’s national security interest.”

The statement added that “the initial, 6-month step of the P5+1 proposal would halt progress on the Iranian nuclear program and roll it back in key respects, stopping the advance of the program for the first time in nearly a decade and introducing unprecedented transparency into Iran’s nuclear activities while we negotiate a long-term, comprehensive solution.” Obama also told the senators that the sanctions relief he is contemplating would be “limited, tentative and reversible” and amount to far less than the $40 billion or $50 billion figure used by some Israeli officials and their US supporters.

If a deal is reached in Geneva, however, it is unlikely to silence many critics. As the senators were meeting with Obama, three Democrats and three Republicans, including Menendez, released a letter to Kerry urging him to toughen the terms on offer to Tehran.

“It is our belief that any interim agreement with the Iranians should bring us closer to our ultimate goal, which is Iran without a nuclear weapons capability,” the letter said. “We must ensure that the steps we take in the coming weeks and months move us toward a resolution that ultimately brings Iran in compliance with all relevant United Nations Security Council Resolutions, seeks to prevent Tehran from possessing any enrichment or reprocessing capability, and resolves any and all fears that Iran will develop a nuclear weapons capability.”

Updated (3:20 PM EST 11/20/23)
Corker issued a statement late Tuesday sent to Al-Monitor on Wednesday that said, “Democrats have procedurally blocked the Senate from taking any action on Iran this week.  As such, we will closely monitor what happens in Geneva and examine the details of any interim deal.” The statement added that Corker is “still concerned we will trade away our leverage without ever forcing Iran to fully comply with its existing international obligations” and that “the interim deal will become the final deal.” But the senator said any congressional action on Iran must have the support of both Democrats and Republicans.