A deal may entail limited uranium enrichment on Iranian soil in return for stringent verification and an end to all nuclear-related sanctions, but time to take the first step is short. 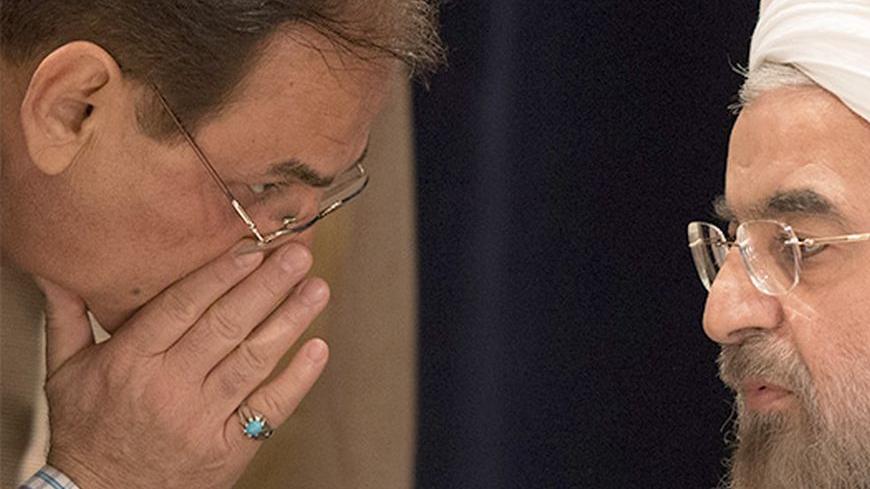 US Secretary of State John Kerry and Iranian Foreign Minister Mohammad Javad Zarif were all smiles after their historic 30-minute meeting on Sept. 26, on the sidelines of the UN General Assembly.

But their optimism could fade quickly if the two sides fail to meet mutual expectations in Geneva next week. The Americans and the other permanent members of the UN Security Council plus Germany (P5+1) are waiting for the Iranians to table a serious new proposal, while the Iranians expect to learn what they will receive in return, both immediately and at the end of the negotiating process.

Iranian officials in New York for UN meetings over the past two weeks have told the Americans that they are willing to offer significant concessions in Geneva on Oct. 15-16, but need to know “the endgame” before taking the first steps.

European diplomats have told Al-Monitor that the P5+1 are still debating how to respond to various possible initial Iranian concessions.

The crux of a deal is likely to be international acknowledgement that Iran can continue enriching uranium at a low level under stringent conditions. In the short term, Iranians appear to be expecting US President Barack Obama to waive or slow implementation of some punishing sanctions in return for curbing or suspending key elements of their nuclear program; at the end, they envision removal of all nuclear-related penalties on Iran’s oil exports and international financial transactions in exchange for permanent limits on the program and enhanced international monitoring.

While the Iranians have said they hope to reach a comprehensive agreement within a year — and Kerry said a deal could be reached even sooner — the time to get to first base in the nuclear talks is limited on both sides.

In Tehran, hard-liners are waiting to pounce if Zarif offers too much in return for too little in Geneva. In Washington, Congress is preparing onerous new sanctions to be voted into law if the October talks fail — assuming the US government is back to full business by then. Congress is also unlikely to lift any existing sanctions while negotiations continue, meaning that initial and interim US sanctions relief would have to be within the sole authority of the executive branch.

Despite the government shutdown, the Senate Foreign Relations Committee held an informative hearing on Iran on Oct. 3, where Undersecretary of State for Political Affairs Wendy Sherman — the lead US negotiator with Iran — asked Congress to wait until after the Geneva meetings before passing new sanctions legislation. Sherman also pointedly refused under tough questioning by Sen. Marco Rubio (R-Fla.) to rule out enrichment on Iranian soil as part of a comprehensive settlement. Instead, she repeated Obama’s recent comments to the UN General Assembly: “We … respect the right of the Iranian people to the peaceful use of nuclear energy” provided that Iran responds with actions “that are transparent and verifiable” in insuring that Iran does not develop nuclear weapons.

Sherman also said that the P5+1 was sticking with an offer made in Almaty earlier this year that offered an end to sanctions on Iran’s exports of petrochemicals and purchase of gold and precious metals. In return, Iran was expected to suspend enriching uranium to 20% U-235 and suspend operations at the underground site at Fordow. Iran rejected the proposal at the time, but that was before the June election of President Hassan Rouhani and the replacement of Saeed Jalili as Iran’s chief nuclear negotiator.

On Oct. 5, Zarif told Iranian state television that the previous P5+1 offer “belongs to history, and they must enter talks with a new point of view.”

Russian Foreign Minister Sergey Lavrov, speaking after meeting with Kerry in Indonesia on Oct. 7, said Iran “probably wants more clarity, more specific steps to be spelled out on the road to the result which we all want to achieve.”

Kerry, at the same press conference said, “So what we need are a set of proposals from Iran that fully disclose how they will show the world that their program is peaceful. And we have made it clear that if there are those indicators, the United States and our allies are absolutely prepared to move in appropriate ways to meet their actions.”

Back on Capitol Hill, however, skepticism reigns.

Rep. Ed Royce, R-Calif., chairman of the House Foreign Relations Committee, called Sherman’s testimony “troubling” and said the Senate should “pass sanctions legislation now,” so that the bill could be combined with one approved in July by an overwhelming margin in the House.

“It is critical that we increase the pressure on Iran to increase our negotiating leverage and deny Tehran the resources to continue its nuclear program,” Royce said in a statement emailed to reporters. “Before we slow down on sanctions, we must see actions — not simply talk — from Iran. Iran is only at the table because of our economic pressure. Why fool with success?”

Sherman told the Senate committee that Iran should “come on Oct. 15 with concrete, substantive actions that you will take, commitments you will make in a verifiable way, monitoring and verification that you will sign up to, to create some faith that there is reality to this, and our Congress will listen. But I can assure you, if you do not come on Oct. 15-16 with that substantive plan that is real and verifiable, our Congress will take action, and we will support them to do so.”