An Israeli-Saudi axis? Not likely

Saudi Arabia has long been willing to work behind the scenes with Israel against common foes, but the kingdom is uninterested in anything more than the occasional clandestine connection. 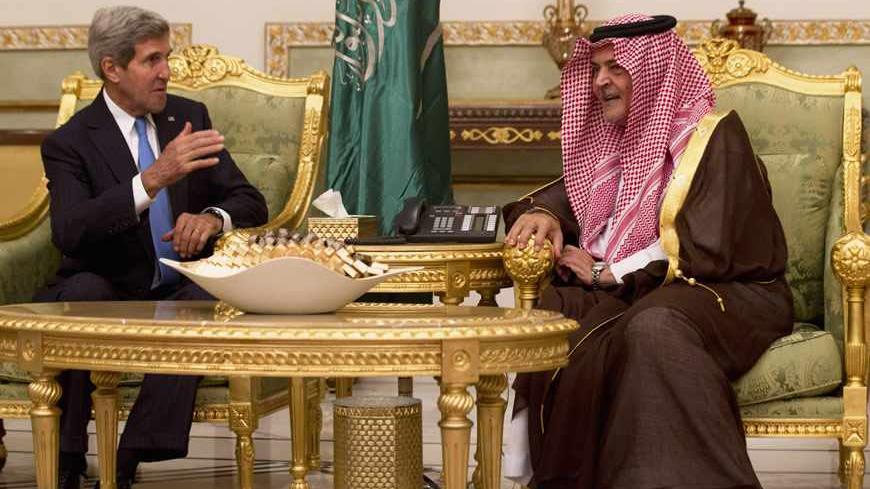 Since the announcement of the interim agreement in Geneva on Iran’s nuclear program, the deal’s sharpest critics have included Israel and Saudi Arabia. Some have suggested that an overlap of interests in opposing Iran’s rehabilitation into the international community portends a closer relationship between these two enemies. In fact, Israel and Saudi Arabia have a long history of tacit and covert cooperation against mutual foes, but the kingdom has no interest in anything more. Indeed, it is likely to use any Iran deal to try to curb Israel’s own nuclear program.

Led by Prime Minister Benjamin Netanyahu, Israel has sharply and publicly denounced the Geneva deal. The Saudis have characteristically been more restrained. The kingdom has publicly welcomed the agreement as a good first step if it works, while the government-controlled media has been more critical. Privately, Saudi officials have been very critical of any deal with Iran that ends sanctions. Saudi officials have been particularly angry to learn of back-channel US-Iranian contacts after the fact. One official has said that the administration of US President Barack Obama lied to Saudi Arabia. Neither Jerusalem nor Riyadh wants Iran rehabilitated into the international community; both prefer it remain isolated. Some sources have reported that the Saudis provided Israel with a tip that US diplomats had opened the secret back channel to Iran in Oman earlier this year.

But a mutual aversion to Iran and annoyance with the United States probably does not augur a closer relationship between the Jewish state and the kingdom. The Israelis would welcome one, but the Saudis don’t trust Israel. They support Palestinian rights and want to see Israel’s nuclear program eliminated.

That said, the kingdom has long been willing to work behind the scenes with Israel against common foes. A good example can be found in the Yemen civil war in the 1960s. Gamal Abdel Nasser’s Egypt orchestrated a coup against the monarchy in Yemen in 1962. With massive Soviet support, Egypt sent 70,000 troops to back the republican government in Sanaa. Saudi Arabia backed Imam Mohammad al Badr and his royalist insurgent army in the mountains of north and east Yemen.

Under King Faisal’s leadership, the kingdom provided money and other logistical assistance to the royalists. It provided safe havens and sanctuary for royalist leaders and soldiers. It recruited British, Belgian and French mercenaries to assist the royalist tribes. The operation was run out of an office on Sloane Street in London, but was all paid for by Saudi intelligence. Former British intelligence officers did much of the work to recruit the mercenaries.

To get more arms to the royalists, the Saudis and their mercenaries turned to another enemy of the Egyptian dictator, Israel. In early 1964, the Israeli intelligence service, the Mossad, made arrangements for the Israeli air force to begin flying clandestine supply missions down the Red Sea from Israel to parachute weapons to the royalists. The mission was approved by the senior leadership in Israel, and the flights were code-named Operation Leopard. Between 1964 and 1966, the Israelis flew more than a dozen resupply flights to aid the royalists. Israel had every interest in bogging down the Egyptian army in its own Vietnam-like quagmire. Faisal’s intelligence chief, Kamal Adham, a graduate of Cambridge University and a descendant of Turkish and Albanian Ottoman rulers of the Hejaz, supervised the operation on the Saudi side. Direct Saudi-Israel encounters were kept to a minimum; British mercenaries communicated between them.

It was a classic example of covert operations by two enemies against a common shared, and perceived to be more dangerous, third. Israel and Saudi Arabia cooperated covertly on other fronts during the Cold War and after. Some of their covert common efforts undoubtedly remain secret to this day.

But the Saudis are not interested in more than the occasional clandestine connections. The Saudi royal family opposed the creation of Israel. At the first US-Saudi summit in 1945, King Ibn Saud warned Franklin Roosevelt not to allow the creation of a Jewish state in Palestine, predicting it would lead to decades of war and constant problems in US-Saudi relations. Faisal was especially extreme in his anti-Israel views, and cut off oil to the United States during the 1973 war. By the 1990s, Riyadh had reluctantly conceded the permanence of Israel’s position in the Middle East (but not its legitimacy) and accepted the Madrid and Oslo processes. But it had not abandoned its support for the Palestinians by any means. King Abdullah, for example, refused to meet then-US President George W. Bush for two years because of Bush’s support for then-Israeli Prime Minister Ariel Sharon.

So for now, Saudi Arabia finds itself uncomfortably aligned with Israel against the P5+1 Iran deal. The two will tacitly cooperate in criticizing the deal. But Riyadh seems prepared to wait and see if the negotiations can produce a more permanent solution that removes the risk of a nuclear Iran. King Abdullah reportedly told Obama in a phone call that he wants more consultation on the negotiations, but that Saudi Arabia shares the goal of a nuclear deal if it is a good one.

In fact, the Saudis are already laying the predicate for what they would want after an Iranian deal: a weapons of mass destruction (WMD)-free zone in the Middle East. Their statements have consistently cited that objective. With Syrian chemical weapons on the path to destruction and an Iranian nuclear accord perhaps in the works, that leaves only Israel’s nuclear arsenal as an obstacle to a WMD-free zone. Look for the Saudis to lead the campaign for a UN-backed zone if an Iran deal is done next year. Of course, giving up their seat at the UN Security Council lost them a propitious perch from which to lead that charge.