The populist Shiite Sadrist Movement demonstrates its leader’s ability to bring a new dynamic to the political scene in Iraq, which is too often marked by polarization and extremism. 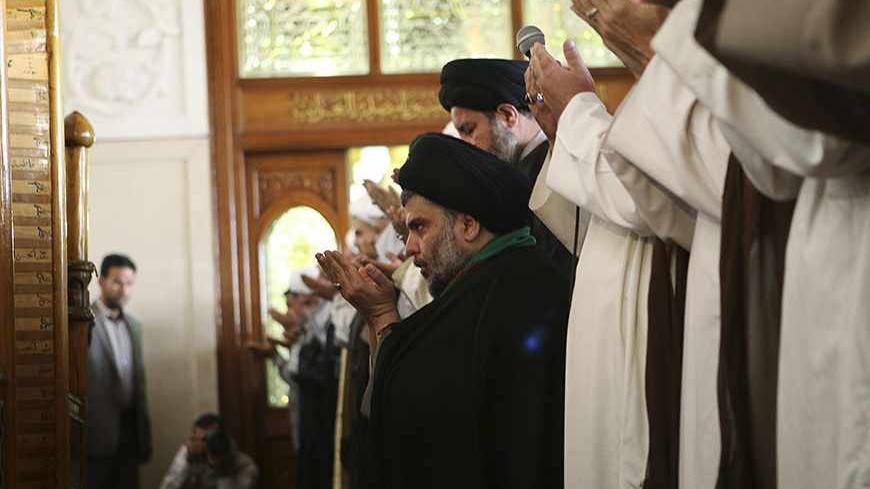 Unlike most Iraqi political forces, Muqtada al-Sadr’s movement is characterized by its strong grass roots and interaction with the public. It is a populist movement, which has its own particular social and cultural aspects. Sadr acts as a religious reference, political chief and social leader all at once. His answers to the questions of his followers express this spirit.

On Sadr's website and social media sites, the Sadrist Movement leader tackles religious, political and moral issues posed by followers. Some ask him about spending the khums, a Shiite religious tax that has been the center of discussion on Shiite jurisprudence. Others raise questions about his stance vis-a-vis Iraqi Prime Minister Nouri al-Maliki's bid to win a third term. (Sadr insinuated his lack of support for such an endeavor.) Another commented on the reluctance of Sunni clerics to condemn al-Qaeda attacks against Shiite civilians to which Sadr expressed his disappointment and hope that Sunni clerics will do better in condemning extremism.

On other occasions, Sadr gives moral recommendations, even related to the importance of cleanliness and humility. In all his replies, Sadr's public language is marked by simplicity, sometimes even with flawed grammar or spelling mistakes.

These practices reflect Sadr’s distinct religious, social and cultural movement, in addition to the nature of his special relationship with his followers. On the one hand, Sadr’s ways constitute an effective interaction method between the head of a movement and its broad masses, clearly communicating the instructions and recommendations of the leader to his partisans. On the other hand, they show an ambiguity — even a confusion — about Sadr’s identity and nature of his leadership. After all, a religious leader's code of behavior is completely different than that of a political leader, given the disparity of both activities. Sadr has tried to deal with this dilemma by publicly delegating the Sadrist Movement’s political committee to supervise and conduct political relations. Nevertheless, the nature of this separation between religion and politics remains unclear, and it seems that Sadr is still reserving the right to take the important political decisions.

Obviously, drawing a clear line between Sadr’s religious and political roles is not currently possible. Such a separation could make the movement lose an important part of its political power that stems from religious loyalty to Sadr’s family. Therefore, the movement will keep acting as a political-religious organization that maintains a distinct sociocultural identity.

The paradox lies in the fact that this organization, due to its wide and cohesive constituency in the poor and crowded districts of Shiite cities, acts more dynamically than others and has successfully undergone gradual self-renewal. In fact, the Sadrist Movement has witnessed change and circulation in its leadership (except for Sadr himself) more than any other Shiite political movement.

Significantly, most leaders in the political organization are relatively young university graduates and are chosen based on competence and loyalty. This is the case, for example, with its current secretary-general, Dhiaa al-Asadi, a Ph.D. candidate at the University of Birmingham. The organization holds regular elections to choose new candidates. Moreover, compared to other parties, it relies on more accurate mechanisms to hold whoever fails or lags behind in their delegated tasks accountable. In parallel, older leaders, most of whom were in exile and do not enjoy wide local support, govern the other parties. For that reason, they focus on patronage to attract followers, and they often do not have the same dynamism and ability to tolerate political changes.

However, this growing dependence on young professionals needs to be translated into more sophistication in political behavior. While increasingly opposing Maliki, and trying to reach out to secular, Sunni and Kurdish forces, the movement tends to prioritize local interests. In its public behavior, the Sadrists are inclined to populism and do very little to present a clear alternative vision about key political, security and economic challenges in the country. This populism might mitigate the elitism of other major forces, but it's far from presenting a clear road map for Iraq’s future.