Former exiles who are now leading politicans are perceived by many Iraqis as abusing their authority and privileges. 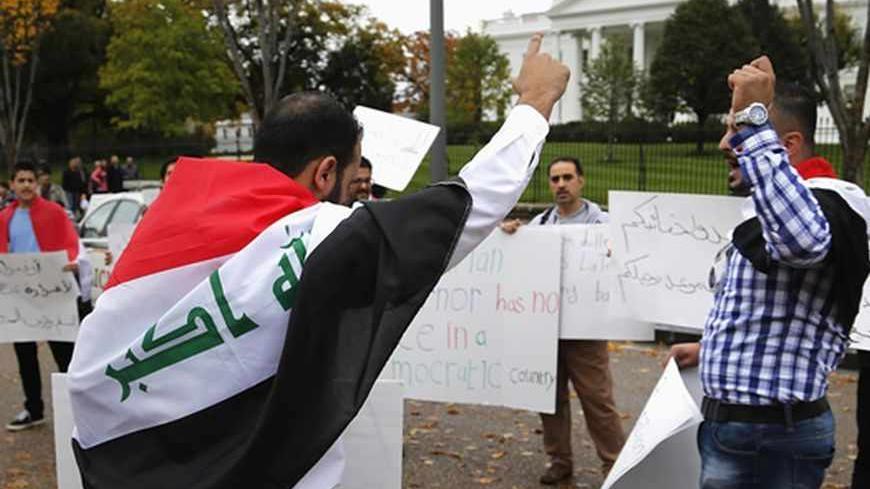 A small group of Iraqi-Americans rally against Iraq's Prime Minister Nouri al-Maliki hours before he is scheduled to meet with US President Barack Obama, at the White House in Washington, Nov. 1, 2013. - REUTERS/Jonathan Ernst

After 2003, when major political forces such as the Dawa Party, the Islamic Supreme Council, the National Congress led by Ahmed Chalabi, the National Accord Movement led by Iyad Allawi and the Islamic Party entered Iraq, the gap with the popular majority was wide. Most Iraqis were not familiar with the opposition figures, which was only normal following the long domination of former Iraqi President Saddam Hussein’s regime that suppressed all forms of opposition at home.

These forces had to search for a “popular constituency.” At a time when Chalabi and Communist Party and Islamic Party leaders failed to find this constituency, Shiite Islamists fared better. In their electoral politics, they successfully used the heightened religiosity in Iraq and the popularity of the religious establishemnt (al-Hawza) in their favor. Those forces worked on emphasizing sectarian identities to turn into representatives of their communities. This was more a “communal” representation than a genuine representation of citizens.

Afterward, those parties used their increasing powers and their control of main governmental positions to create networks of followers and a wider support base. It is difficult, for example, to differentiate between the political and ideological visions of the Dawa Party and the Islamic Supreme Council, but it is easier to differentiate between patronage networks that they have within the governmental administration, the military, the media and civil society.

Previously exiled politicians currently control the most important positions: the prime minister, vice president, deputy prime minister, minister of higher education, minister of national security, minister of defense, minister of youth, minister of communications, minister of transportation, the secretary-general of the Council of Ministers, among many other positions, including posts within “independent” institutions such as the Communications and Media Commission and the Iraqi media network. With the exception of the Kurdish forces, which represent a minority, along with the movement of Muqtada al-Sadr, the main political blocs in parliament are under the leadership of politicians who returned from exile after 2003.

The rentier nature of the Iraqi state has helped those forces build a political clout that far exceeds their popularity. They have managed to infiltrate the institutions, control significant shares of oil revenues and take advantage of government contracts to expand their resources.

It is difficult for any new popular force to build itself up and be politically active without having such resources and capabilities. Small parties often face institutional and legal obstacles that were legislated or regulated by big parties. Among those obstacles, there is the electoral law, which forbids competition in small local constituencies. After the last general election in 2010, only 17 members of parliament managed to get enough votes to enter parliament, while big parties succeeded in distributing their additional votes to 308 other candidates, which allowed them to enter parliament.

It has been repeatedly said that Iraqi democracy is without democrats, but under such an electoral system, it seems that what the Iraqis are practically getting is “elections without elections.”

The psychological and cultural gap between the exiled politicians and the "insiders" is still wide. One example of this gap is the growing public criticism of the behavior of the political class, its enormous privileges and its indifference to the security and economic conditions plaguing the majority of Iraqis.

The exile forces have maintained a suspicious perception of Iraqis who stayed at home, and often tend to exclude them from power circles that are largely kept limited to their members who lived together in exile. This is the case of the Prime Minister's Office and the General Secretariat of the Council of Ministers, both of which have consolidated their powers based on personal loyalty to the prime minister.

Most Iraqi officials tend to retain a foreign passport, although this is forbidden under the constitution. Some of them keep their families and expand their property outside of Iraq, which shows a lack of attachment to Iraqi society. Instead of trying to bridge the gap with the popular majority, these politicians have started legalizing their privileges by creating terms such as “jihadist service” that allow their members to obtain personal benefits, as is the case with the new pension law that the government is seeking to adopt.

This represents a return to the differentiation and exclusionary policies that existed under Saddam's regime, as if opponents of that regime are trying to reproduce it.

Harith Hasan is an Iraqi scholar and writer. He has a PhD in political science, and his main research interests are state–society relations and identity politics in Iraq and the Arab Mashriq. On Twitter: @harith_hasan